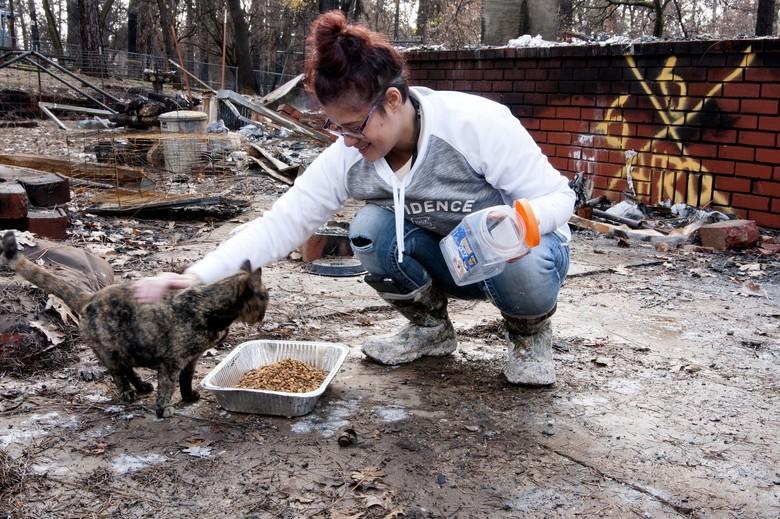 Four banks agreed on Jan. 22 to provide about $5.5 billion to PG&E, to ease the utility’s way through an expected Chapter 11 bankruptcy.

He asked whether bankruptcy is definitely on the horizon and about the newly announced financing.

In part two of our conversation, they talk about the effects of the utility's liability for the devastating fires of 2017 and 2018, and what effect judges might have on PG&E's activities during Chapter 11 reorganization.

Editor's Note: After Steve and Marisa Lagos talked about this story, Cal Fire released a short statement and a longer report, clearing PG&E of responsibility for the 2017 Tubbs Fire. PG&E may still declare bankruptcy, but pressure on the utility has eased somewhat with the January 24 report. Here's more on the story from the San Francisco Chronicle.

(Image: Mary Gowins feeds a neighborhood cat she has taken care of for the past seven years in Paradise, California, Dec. 17, 2018. “Patches” had been lost since the Camp Fire erupted on Nov. 8, 2018. Regulators and CalFire have not yet determined the causes of the Camp Fire and the 2017 Tubbs Fire, but PG&E is the likely culprit, and the company's expected bankruptcy filing is a response to its potential liability. Credit: U.S. Air Force photo by Staff Sgt. Taylor Workman)