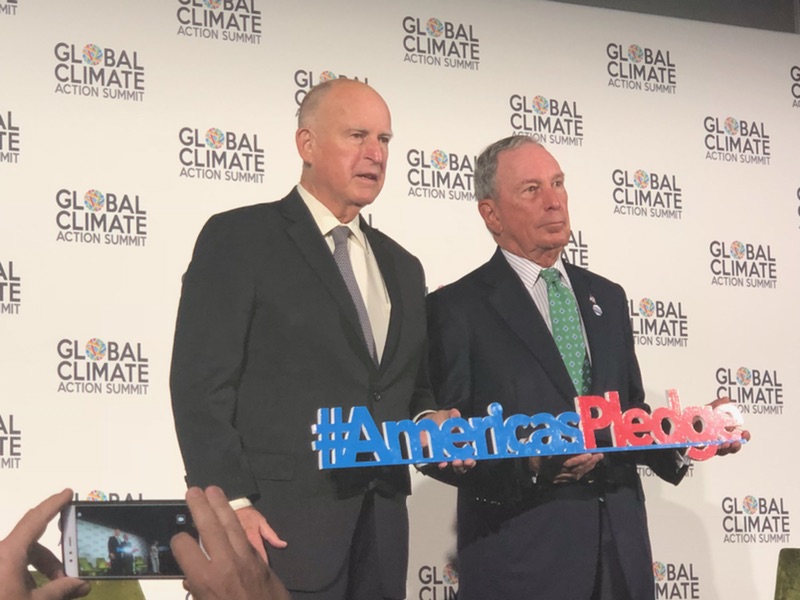 By Caryl Hart
In a press briefing at the opening of the Global Climate Action Summit, California Governor Jerry Brown and former New York City Mayor Michael Bloomberg announced the America’s Pledge Campaign. The plan aims to keep American states, cities and corporations on track to reduce greenhouse gas emissions despite a lack of leadership from the federal government.
Brown and Bloomberg are two of the cochairs of the event.
In setting the context for the plan, Bloomberg said that since 2000 the United States has reduced carbon emissions more than any other nation. Last year, United States emissions fell to the lowest level in 25 years. A major reason for the reduction is the closing of coal plants and the move to cleaner power. One half of U.S. coal plants have closed, and they are continuing to close in spite of action by the Trump administration and its public advocacy of coal
(Photo: Governor Jerry Brown and former New York City mayor Mike Bloomberg at the Global Climate Action Summit)
Cities, states and businesses are also continuing to reduce emissions. St. Louis switched its street lights to LED, resulting in a 17 percent reduction in emissions. Real action is happening outside the Washington beltway in both red and blue states. Companies understand it is in their interest to reduce emissions, not only for their current bottom line, but for their long term survival.
America’s Pledge will put the U.S. within striking distance of the goals set by the Paris Agreement.
Gov. Brown recalled the recent work of the state's legislature, which passed a bill setting a goal of 100 percent clean electric power by 2045. He also signed an executive order calling for zero net emissions by 2045 – which he said is the largest commitment to addressing climate change by any government.
The federal government, Brown said, is “insane” in its approach. He cited as an example recent changes in the government's approach to methane.
For Brown, progress has brought us to the “base camp” of Mt. Everest but we still need to scale the mountain.
Michael Bloomberg approached the issue from a business perspective. It's in the interest of corporations, he said, to be green. Environmentally-friendly companies are able to attract investors, retain employees, and satisfy customers. He touted the so-called “triple bottom line” - where policies are good for the earth, for the company, and for society at large.
Trump’s policies border not just on insanity but criminality, Brown said, putting at risk the lives of millions. When it comes to climate, the governor went on, Trump is “a liar, criminal [and a] fool.”
Caryl Hart received her doctorate from UC Berkeley, School of Natural Resources, with research focus on the potential of parks and public lands to respond to climate change and play a significant role in mitigation and adaptation. Member, Climate Action Reserve Forest Protocols Work Group, former Director, Sonoma County Regional Parks. Member, California Parks Forward Commission, former Chair of California State Parks Commission, founder of LandPaths, environmental non-profit. Attorney and recognized expert in parks acquisition and management with over 25 years experience in park advocacy, innovative fundraising, administration, and developing agency and community partnerships.