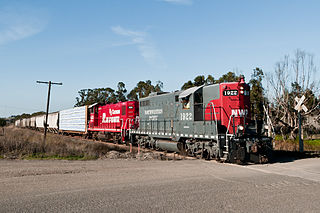 Freight trains have been quietly rolling through the south part of the North Bay twice a week over the past 11 months. Now they are poised to run farther north, and more frequently.

This time last year, one of the final obstacles to the resumption of the freight rail service—which had been inactive for the previous 10 years—was the City of Novato, which raised questions about noise and other issues. Answers were negotiated at some length, and Mitch Stogner, director of the North Coast Railroad Authority says now that everyone seems satisfied with the results.

So far, the new Northwest Pacific trains have rarely ventured north beyond Petaluma, so most of Sonoma County has yet to see the colorful new engine that pulls them. John Williams, President of the Northwest Pacific Railroad, describes his rolling stock.