Rob KapilowThe Golden Gate is a dramatic space traversed by an iconic bridge. These two strongly visual elements have now been rendered in music, in new work for orchestra, chorus and real world sound. 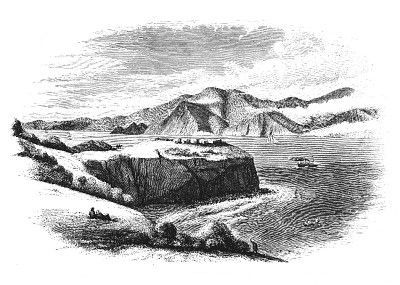 The unbridged Golden Gate is shown in this drawing which views the span looking north from what is now known as Fort PointOnce he recognized the Golden Gate as a geographical feature that has endured for centuries, composer Rob Kapilow discovered he could develop an ancient starting point for his new piece.

Building the Golden Gate Bridge required overcoming enormous resistance. Kapilow says he sought to embody that aspect of its history in his composition as well.

In our interview, Kapilow used his iPad to play samples from his sound collection and his composition. He explained that digital technology is also being employed when the piece is performed. Of course that also meant a steeper learning curve for the keyboardist whose job it is to "play" those sounds.