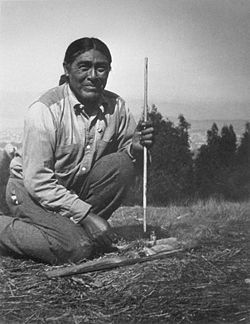 Ishi, the so-called “Last Yahi” may be the most famous Indian in California history ( in the photo at left, he is seen as he appeared when "discovered" near Oroville in 1911).  But much of what has been taught about him over the past century has turned out to be wrong. 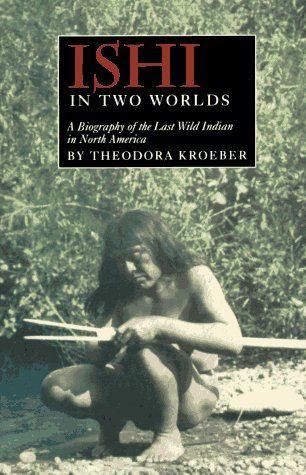 Ishi in Two Worlds, the best-known story of Ishi’s life was written by Theodora Krober, the wife of the University of California anthropologist who worked with Ishi most extensively, and published in 1961, well after both men had died. It’s a romanticized, not particularly factual account, but Nicole Lum of the California Indian Museum and Cultural Center in Santa Rosa says that even during Ishi’s lifetime, his personal history was subject to revisionist displays.

The exhibit, Ishi:  A Story of Dignity, Hope and Courage, remains on display at the museum, near Larkfield.

From the Museum's text introducting the exhibit:  "Among California Indians, none have figured more prominently in the public eye than Ishi. When Ishi arrived out of the foothills of Northern California into the town of Oroville in 1911, he was mistakenly characterized as a “wild” and “primitive” Indian, the “last of a Stone Age tribe”.  These assumptions caused him to be brought to the University of California, Museum of Anthropology in San Francisco as a research subject by anthropologist, Alfred Kroeber.  Ishi remained at the museum and shared cultural and historical information with scientists and the public during his five-year residence.  He passed away in 1916 after having contracted tuberculosis while in San Francisco.  Despite his close friendship with Kroeber and other University luminaries, at death, his remains were subjected to the indignity of an autopsy.  His brain was removed in the interests of science.  It disappeared for 83 years and resurfaced in a glass jar on a Smithsonian Institute shelf in 1999 after Ishi’s tribal relations mounted a successful effort to repatriate his remains under the Native American Graves Protection and Repatriation Act." 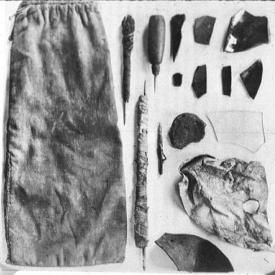 This set of tools is a replic a of those used by Ishi to demonstrate his technique for making arrowheads and other blades from obsidan and pieces of glass.