It means many things to many people, but there's a widespread sense that "The American Dream" is now tattered, tarnished or unattainable. A nationwide series of informal gatherings over the coming weekend is meant to rebuild a collective vision of what it should be, and how we might realize it. 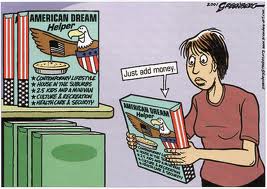 Each of the American Dream meeting sites (see the list here) will follow an agenda developed by the individual host or hosts. Meredith Caplan outlines the plan that she and her husband, Steve Bush, have prepared for the group that will gather at their Santa Rosa home Saturday afternoon.

A list of priority issues from those assembled is one intended outcome for the American Dream Movement meetings. But Guerneville resident David Martin, who will host a gathering there tomorrow afternoon, already his own list in mind.