"Happiness is a Warm Blanket" 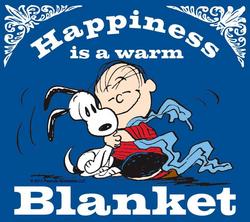 A new generation creative team, led by the son of cartoonist Charles Schulz, has revisited the world of Peanuts to produce a new animated video that debuts this week.

Craig SchulzIt isn't easy to take a series of four-panel comic strips and build them into an extended animated storyline, but Craig Schulz says that was the challenge they embraced in creating Happiness is a Warm Blanket.

Andy BeallThe music of the late Vince Gualardi was an integral part of all the previous Peanuts specials. Director Andy Beall says they turned to composer Mark Mothersbaugh (also know as a founding member of Devo) to develop a soundtrack that matched Gualardi's emotional palate, if not his exact musical style.

The offical public premiere of Happiness is a Warm Blanket will be held at the Schulz Museum in Santa Rosa on Thursday eveing, March 31, at 7 pm. You can also view the trailer for the film here.