A disgraced pathologist from a notorious Sonoma County murder case is just one example of how little his profession is monitored or regulated. The checkered history of Dr. Thomas Gill is part of a broad investigation into the profession of forensic pathology breaking today under the heading of "Post Mortem."

As the team of reporters working on the "Post Mortem" stories turned their attention to California, Ryan Gabrielson found to his surprise that a single company--the Fairfield-based Forensic Medical Group--was contracting to provide autopsy services for much of the northern part of the state. 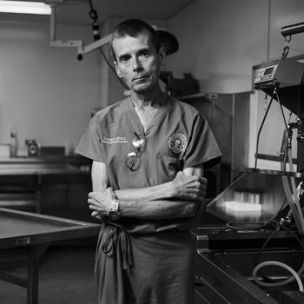 Dr. Thomas Gill at the Jackson County Medical Examiner’s Office in Kansas City, Missouri in 2004.  Photo by Michael McClureDr. Gill was banned from further practice in Sonoma County following the Pelfini debacle, but Gabrielson reports, that Gill continued to work for Forensic Medical Group in other counties who know nothing of the doctor's troubled past.