Trump Vs. Biden: How Russia Sees The U.S. Election 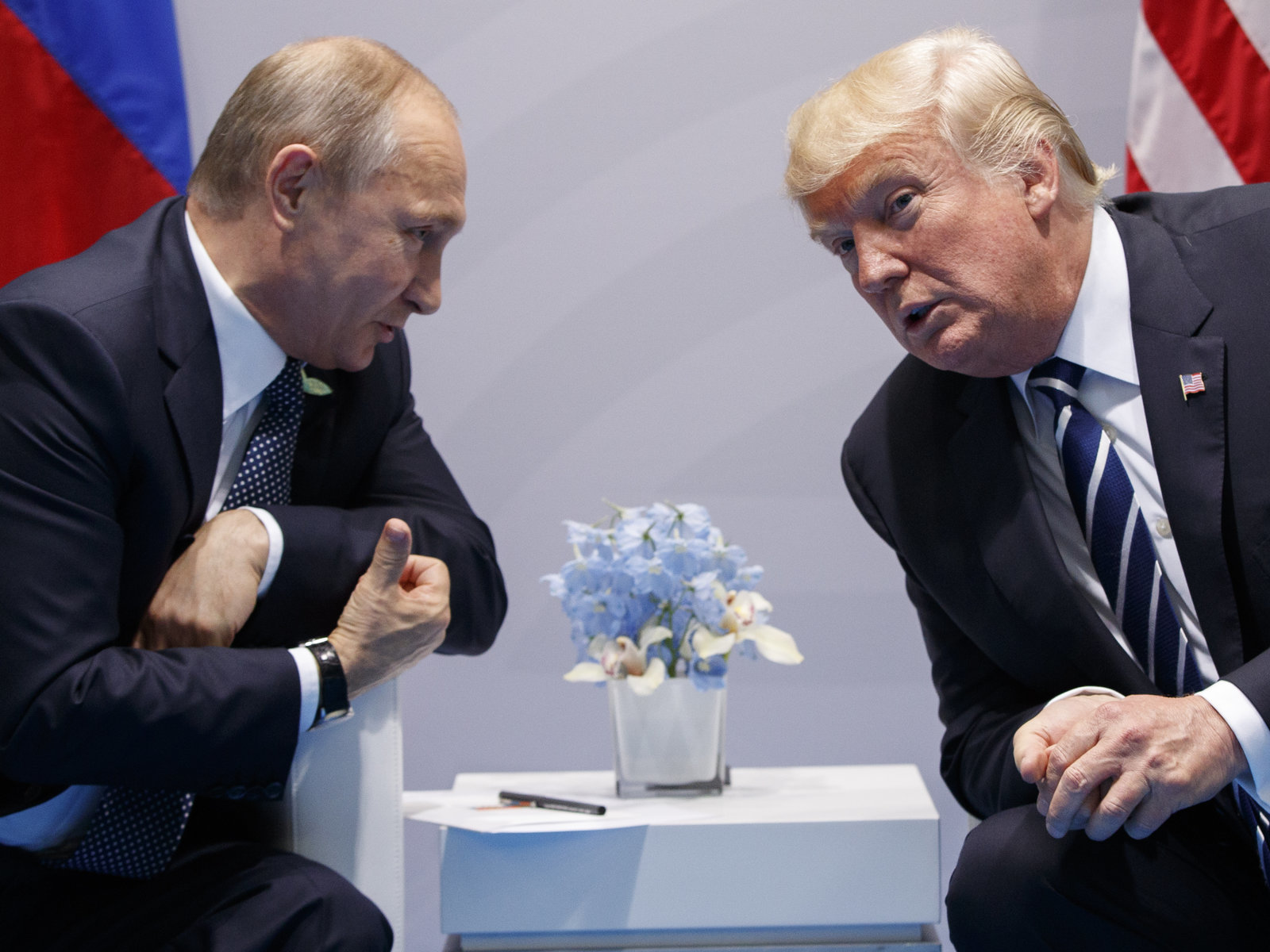 Early this month, President Trump's national security adviser Robert O'Brien held his first meeting with his Russian counterpart, Nikolai Patrushev. The two men met in neutral Switzerland as Patrushev, a confidant of Russian President Vladimir Putin, is under sanctions by the United States and the European Union.

"One of the reasons I went to meet with Gen. Patrushev is to let him know that there would be absolutely no tolerance for any interference with our Election Day," O'Brien said after the meeting. He said he "demanded that Russia not engage in that sort of thing. The Russians have committed to doing so."

Despite Patrushev's commitment and O'Brien's apparent acceptance of it, U.S. intelligence agencies say Russia is still trying to interfere.

Last month, FBI Director Christopher Wray testified before Congress that Russia is engaging in "malign foreign influence" — including the use of social media and propaganda — that primarily goes after Trump's Democratic challenger, Joe Biden.

The Kremlin has categorically denied interfering in any U.S. elections, past or present. But the Kremlin also recognizes that the issue has become an obstacle to improving bilateral relations, even slightly.

A little more than a week after Wray's testimony, Putin offered the U.S. an agreement that would ban interference in the other country's electoral processes. The initiative echoed Putin's proposal to form a joint cyber-security unit, which he floated during his 2018 summit with Trump in Finland — and went nowhere.

The Kremlin is sticking to the line that it is in fact the United States that tries to interfere in Russian politics. Three years ago, the Federation Council, the upper house of the parliament, formed a temporary commission on foreign interference in Russia.

Klimov says his commission has accumulated thousands of pages of documentation of U.S. influence efforts. He claims American foundations connected to the U.S. government work with Russian political activists, and that cyberattacks on Russia originating in the United States are manyfold those in the other direction.

The notion of "Russian interference" was a bogeyman, he says, invented during the Obama administration to try to help Hillary Clinton win the White House in 2016.

In Moscow, the acrimony left over from the last U.S. presidential election is real. Everything was supposed to be so different when Donald Trump unexpectedly took over the presidency from Barack Obama, promising to improve relations with Russia. What followed instead were continuing charges of Russian malfeasance by Trump's own intelligence officials — and bipartisan support in Congress for tightening sanctions.

Now, with about three months left in Trump's term, U.S.-Russian relations are even more fraught than when he came into office. The last major arms control treaty between the United States and Russia will expire in February, and negotiations continue to extend it.

Anyone who watched the contentious debate was left with a "feeling of disgust," Kiselyov said.

"For decades, America has imposed its way of life on the world as a universal model," he said. "And now everything has changed so fast."

Trump, once celebrated as a friend of Russia, is no longer seen so favorably. According to a poll published in September, only 23% of Russians have a positive view of Trump, while 43% have a negative one. And 55% of respondents said they were hearing about Biden for the very first time.

"I think the very fact that Biden was Obama's vice president already makes him not a friendly figure in Russia," says Moscow-based political analyst Masha Lipman."Obama looked down on Russia. In some of his statements, he certainly sounded not respectful. This caused this sense of offense on Russia's part."

Even as the Obama administration pursued a "reset" in relations with the Kremlin, Biden made disparaging remarks about Russia's role as a global power, saying in 2009 that it had "a withering economy" and was "clinging to something in the past that was not sustainable."

On a visit to Moscow in 2011, Biden said it would be bad for Russia if Putin ran for a third term — the Russian president is now in his fourth term and looking ahead to two more.

Biden later said that on the same visit he told Putin: "I'm looking into your eyes, and I don't think you have a soul" — to which Putin, in Biden's rendering, smiled and replied: "We understand one another."

Still, Putin knows Biden could become the next American president. Asked by a Russian TV reporter last week about his preferences, Putin tried to be diplomatic.

"We will work with any future president of the United States, with the person who will have the trust of the American people," he said.

"We know that President Trump has repeatedly spoken in favor of developing Russian-American relations. We certainly appreciate that very much," he said. He blamed a "bipartisan consensus on the necessity of containing Russia" for limiting Trump's room for maneuver.

At the same time, Putin criticized the Trump administration for signing off on new sanctions and for withdrawing from the Intermediate-Range Nuclear Forces Treaty last year.

As for Biden, Putin said the Democratic candidate used "sharp anti-Russian rhetoric," but that the Kremlin was encouraged by Biden's interest in preserving the New START arms control treaty — originally negotiated by the Obama administration— that expires in February.

Lipman cautions that the prospects for better relations are bleak no matter who wins. If Biden becomes president, he may consolidate European allies against Moscow, she says, while if Trump is reelected, his political opponents may pursue an even harsher policy toward Russia.

The only thing that helps the Kremlin, Lipman says, is more polarization and turmoil in the United States.

"Turmoil means the United States weakened," she says. "This is what the Kremlin can actually benefit from, not an improvement in relations. This is the only thing that Russia may hope for."