Protests Continue In Spain Against Jailing Of Rapper Over Tweets 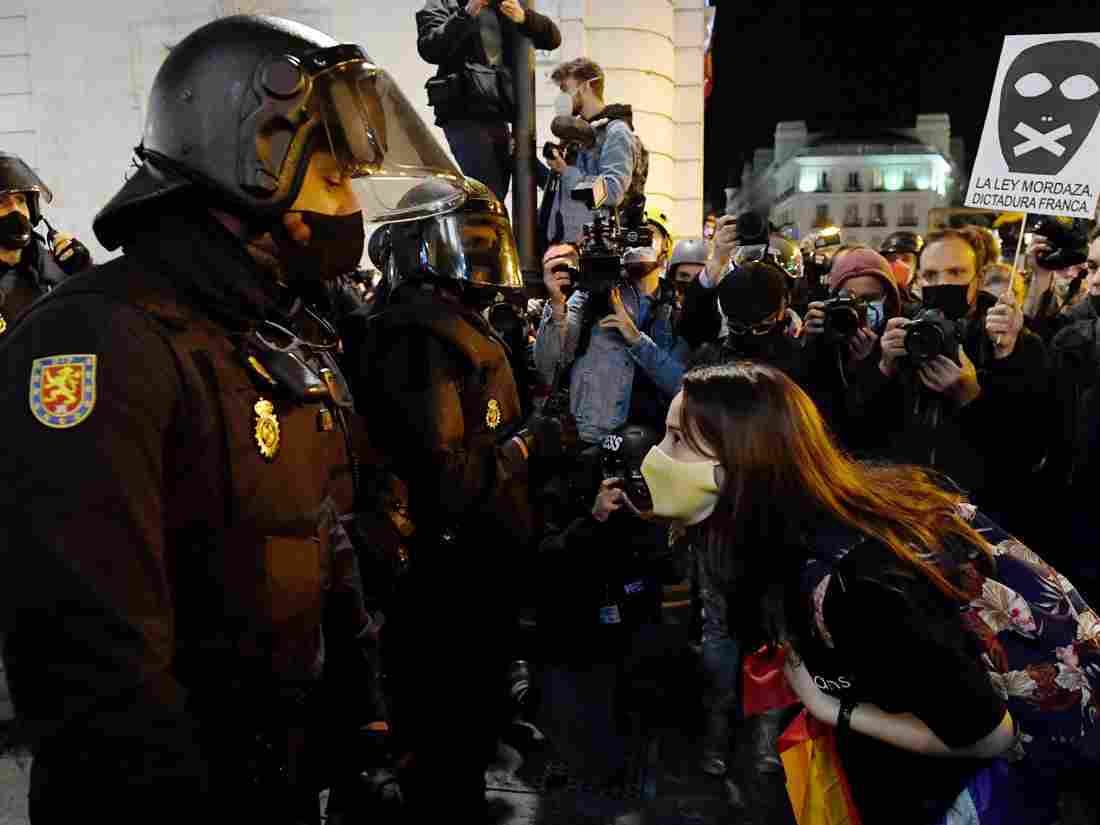 A dramatic arrest earlier this week of Spanish rapper Pablo Hasél, who was convicted of criticizing the monarchy and supporting a Basque separatist group in social media posts, has sparked days of protests across Spain and renewed debate over free speech in the country.

Thousands of Hasél supporters have taken to the streets in Madrid, Barcelona, Valencia, and Girona, since his arrest. But peaceful protests devolved into chaos as protesters clashed with police for a third night in a row Thursday. Dozens have been arrested across the country since the demonstrations began.

Hasél was arrested on Tuesday, the day after the expiration of a deadline to turn himself into police for his March 2018 conviction. He has begun serving a nine-month prison sentence.

Hasél and some of his supporters had barricaded themselves in Lledia University, near Barcelona, to avoid arrest. The next day, Catalan riot police stormed the university, according to local reports.

Hasél was reportedly hauled away shouting, "They will never silence us; death to the fascist state!"

Demonstrations criticizing Hasél's conviction under a strict "gag law" criminalizing insults against the Spanish Crown have grown throughout the week and spread to other cities.

Videos and images of the demonstrations show protesters throwing bottles as officers rushed large groups of people and fired rubber bullets to break up the crowds.

In videos shared online recently, police in riot gear are seen running into a large crowd of protesters who moments before were seen peacefully chanting in the streets.

Earlier this week, Mossos d'Esquadra, Catalonia's police force, reported that a group of people in Girona, where the largest demonstration of 5,000 people gathered, threw stones and "pyrotechnic material" at police. A bank in the city was also burned and protesters took off with several traffic signs.

Mossos said as of 11:13 p.m. on Thursday, eight people were arrested in Barcelona. Rioters left behind burned containers, street furniture, and motorcycles and several businesses had windows broken.

Hasél was convicted under Spain's 2015 Public Security Law. It bans the glorification of terrorist groups as well as insults against the Spanish monarchy.

Spain's Supreme Court in May 2020 upheld a lower court's conviction in March 2018 against Hasél, whose legal name is Pablo Rivadulla Duro.

The Supreme Court said from 2014 to 2016, the rapper tweeted messages that "denigrated" Spanish institutions and glorified "people convicted of terrorism." He allegedly tweeted support for the Basque separatist group ETA, an organization that carried out one of Europe's longest terrorism campaigns beginning in the late 1960s. The group officially disbanded in 2018.

Hasél's case has gained the support of prominent artists and actors who have lambasted Spain's government for imprisoning someone over tweets. Film director Pedro Almodovar and Oscar award-winning actor Javier Bardem are among those who signed a petition supporting Hasél.

Amid the ongoing pressure campaign, the Justice Ministry announced plans to reform the gag law, aiming to target only actions that encourage violent actions, but any changes are unlikely to make a difference to Hasél's case.

(Photo: A woman talks to police during a demonstration against the imprisonment of Spanish rapper Pablo Hasél in Madrid. Clashes between police and protestors have gone on for three days and have led to dozens of arrests and injuries. - Pierre-Philippe Marcou/AFP via Getty Images)