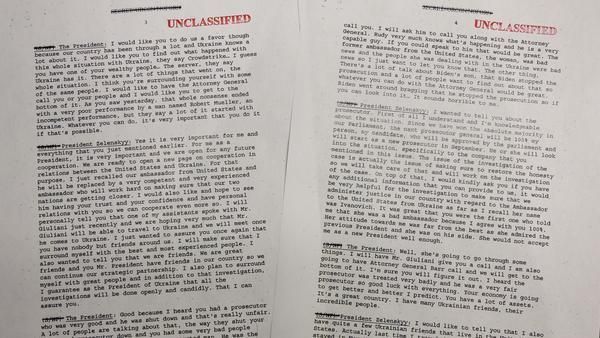 According to the complaint, senior White House officials intervened to "lock down" records of the July 25 call between Trump and Ukrainian President Volodymyr Zelenskiy. To do this, the whistleblower said, the rough transcript was loaded into an electronic system meant for classified information "of an especially sensitive nature."

"I have never seen it done in my time in the White House, and I doubt that other presidents have engaged in this, although you never know what happened in the Nixon White House," former Defense Secretary Leon Panetta told NPR's Here & Nowon Thursday. Panetta also previously served as the director of the CIA and White House chief of staff, all in Democratic administrations.

A former Trump NSC official confirmed to NPR that the Trump White House does use such a system. That official, who spoke to NPR on the condition of anonymity, said about four to six people in the White House likely had access to the system. Access is so tightly controlled that not even the president's national security adviser can input or retrieve information from it — though high-ranking officials could direct information there. Information stored in the system is shared in person and not over email or secure phone lines.

"The only reason to do that is to possibly obstruct justice," Panetta said. "When these kinds of tapes are isolated this way, there was a recognition that they contained possible evidence of wrongdoing."

"I had never heard of anything like that," said Ned Price, who was a senior director for strategic communications at the NSC during the Obama administration. Price said then-President Obama's phone calls with world leaders were classified, but they weren't stored on the top-secret system.

Another former NSC official, Michael Green, also described the alleged storage of the rough transcript on this separate system as "deeply disturbing."

Green served as director for Asia at the NSC between 2001 and 2005, when George W. Bush was president.

"Remember President George W. Bush was getting phone calls after 9/11, during the wars in Iraq and Afghanistan," Green said. "And so even in that context, I had never heard or witnessed what we're seeing now, where a transcript was routed directly to the most sensitive compartmented security clearances so that no one could see it."

Price, who has been an outspoken critic of Trump, said the type of information typically stored on this system would be related to intelligence programs or activity that only a specific set of people in the U.S. government would know about, and he emphasized that it wouldn't be the kind of information that would be shared with a foreign leader on the phone.

The fact that the administration was able to release the rough transcript of the call undercuts the notion that any highly secret information was shared, Price argued.

"This seems to be nothing more than an abuse of the classification and the information security system to safeguard not the information, but to effect a cover-up," he said.

The White House declined to answer questions specifically about the handling of this transcript.

But, White House Press Secretary Stephanie Grisham has defended Trump's call and slammed the complaint as "nothing more than a collection of thirdhand accounts of events and cobbled-together press clippings — all of which shows nothing improper."

Kellyanne Conway, counselor to President Trump, told reporters she was not familiar with NSC procedures regarding these transcripts, but argued that what's most important is that the White House has now made the call public.

Rep. Kevin McCarthy, the top Republican in the House, told reporters that he could understand why the White House might want to use a more secure system.

"Could I see why you'd want to put it on a more secure server?" McCarthy asked. "I think in the world of technology today, yeah, people should secure what's going forward."

(Photo: The whistleblower complaint says notes from President Trump's call with the Ukrainian president, released this week, were loaded into an electronic system meant for classified information "of an especially sensitive nature." - Andrew Caballero-Reynolds / Afp/Getty Images)