A Guide To What's Happening In Hong Kong 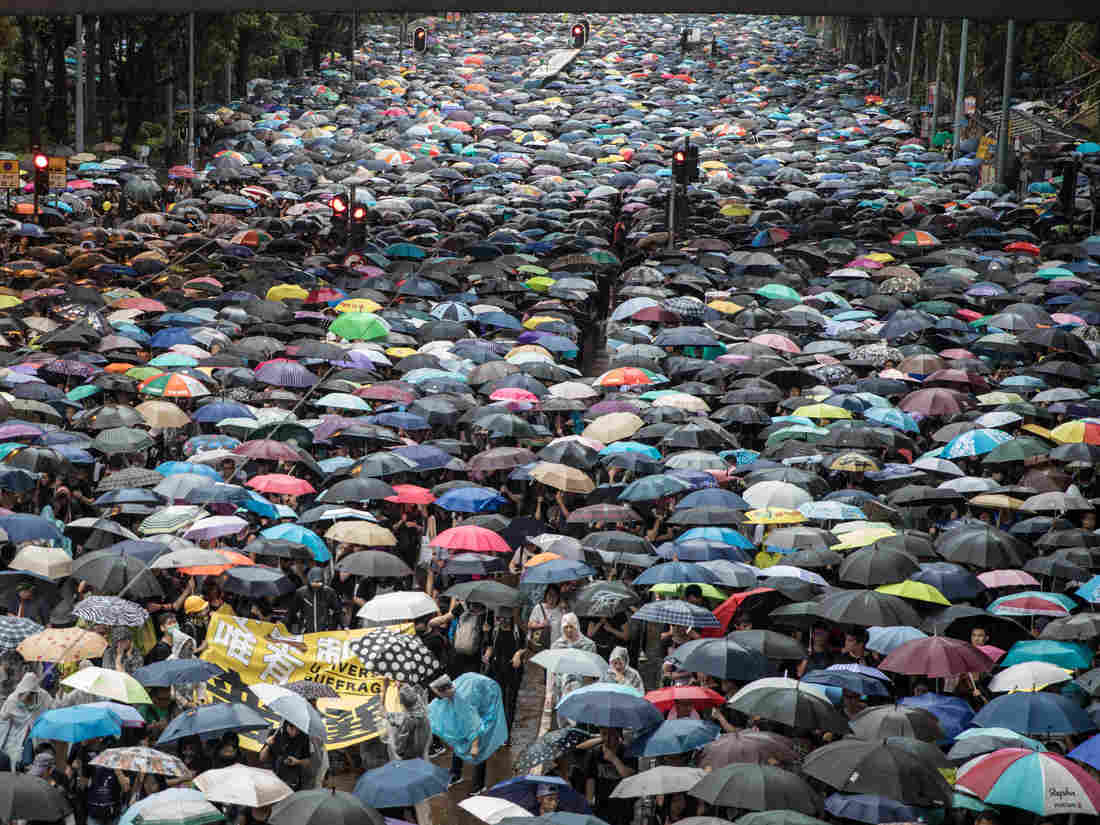 Organizers say more than a million demonstrators gathered Sunday in Hong Kong, which has been racked by protests over extradition 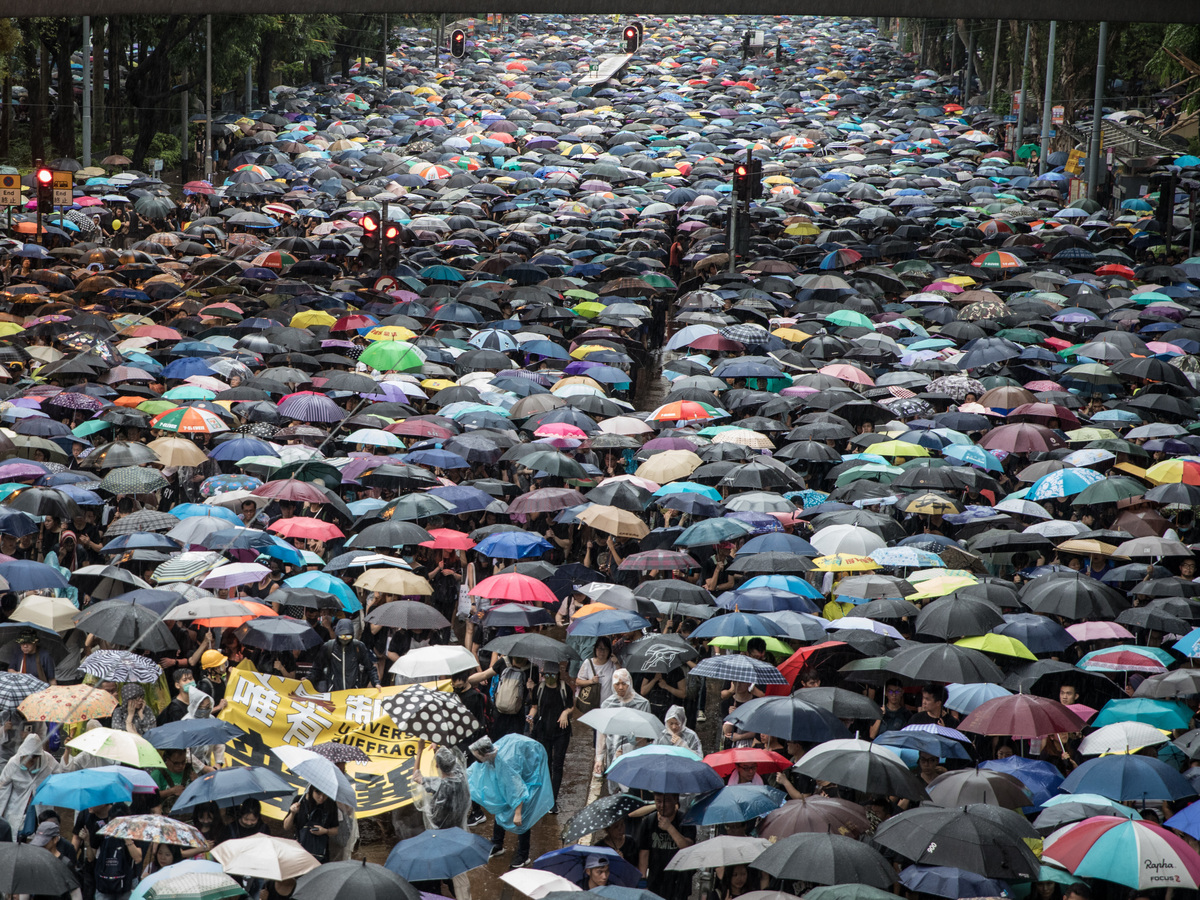 Organizers say more than a million demonstrators gathered Sunday in Hong Kong, which has been racked by protests over extradition legislation.

For months, Hong Kong's streets have seethed with discontent. Scenes from the semiautonomous region show protesters, sometimes numbering in the hundreds of thousands, many wearing surgical masks and carrying umbrellas that have come to signify resistance.

The images are astonishing, and the issues that set the protests in motion are complex.

So here's a primer breaking down the major players, why they have poured into the streets and the response so far from China. 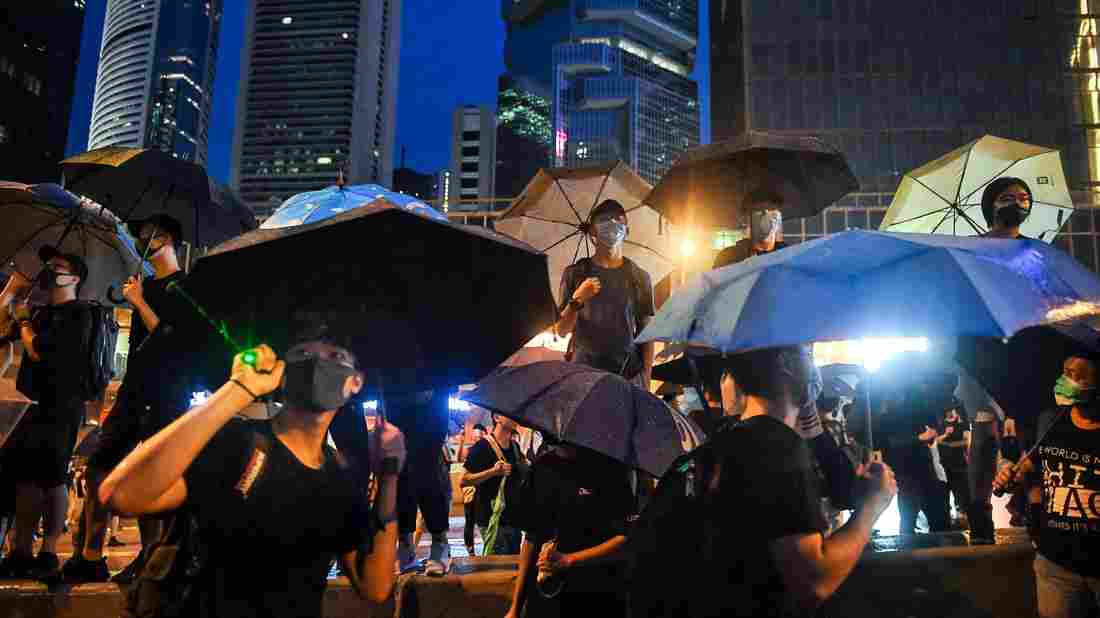 Protesters gather for a rally Sunday in Hong Kong. Many of the pro-democracy demonstrators have brandished umbrellas in a nod to a symbol widely used during the semiautonomous city's massive 2014 protests. Lillian Suwanrumpha/AFP/Getty Images hide caption 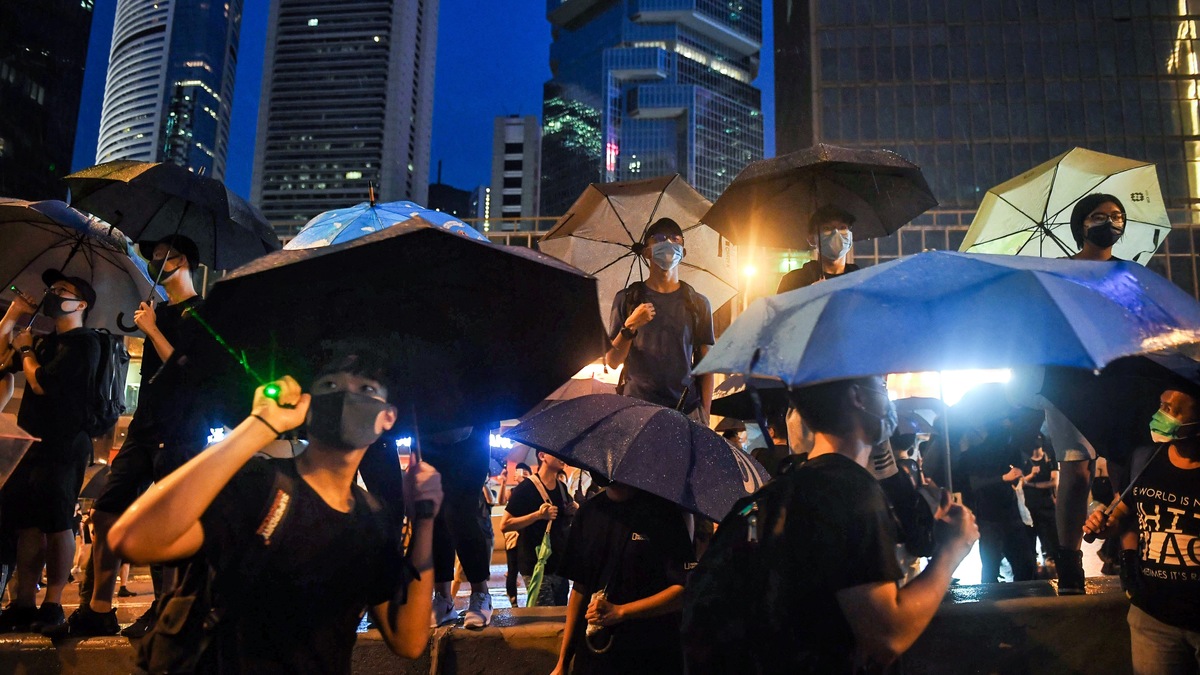 Protesters gather for a rally Sunday in Hong Kong. Many of the pro-democracy demonstrators have brandished umbrellas in a nod to a symbol widely used during the semiautonomous city's massive 2014 protests.

Why are the protests happening?

The latest spasm of discontent traces to February, when members of Hong Kong's government proposed an extradition bill known as the Fugitive Offenders and Mutual Legal Assistance in Criminal Matters Legislation (Amendment) Bill 2019.

That measure would expand the range of countries where suspected offenders may be sent, beyond the list of those with which Hong Kong has mutual extradition agreements. Under the bill's provisions, the region would be able to extradite suspects to other countries on a case-by-case basis, with the chief executive holding significant power over which cases apply.

Notably, this opens the door to extradition to mainland China, which has sought greater control over the former British colony since it was restored to Beijing in 1997 as a special administrative region with its own independent court system.

"There have been a number of serious crime cases in which the culprits have absconded to other jurisdictions to elude justice," the region's Security Bureau explained in a paper published in February. To illustrate the point, the security officials cited a recent incident in which a Hong Kong resident suspected of murdering someone in Taiwan could not be extradited to Taiwan to stand trial for murder.

"As a result," the officials explained, "the court of Hong Kong could only handle the suspected money laundering offences committed by the suspect in Hong
Kong, leading to widespread public concern."

The bill's critics argue that it marks a clear erosion of the region's judicial independence from Beijing and that it could nudge open the door to what some demonstrators have described as "legalized kidnapping." Protesters fear Chinese authorities would pursue extradition of political dissidents under the guise of trumped-up charges.

After massive protests erupted in June, the bill itself stalled. Hong Kong's chief executive, Carrie Lam, indefinitely suspended the legislation and even apologized, saying that "our explanation and communication work has not been sufficient or effective."

So if the bill is suspended, why have the protests continued?

That's partly because the bill is not formally dead. Lam has refrained from withdrawing it entirely from the legislative process. That has raised suspicions among its critics that it could be revived, and these critics have staged multiple major rallies since Lam's suspension of the bill.

"We demand that the bill be formally withdrawn now," said Alvin Yeung, a member of the region's Legislative Council and leader of the pro-democracy Civic Party. He also told All Things Considered that protesters are demanding "an independent inquiry to look into police misconduct and brutality."

"That is something so simple that any open and civil society would do," he added. "But then this government has been refusing to set up a commission to look into that. And more importantly, of course, is a democratic system."

Yeung and others are frustrated with an electoral system that remains closed to the vast majority of Hongkongers (more on that below), and they're alarmed by what they see as Beijing's steady encroachment into their local affairs.

Who are the major players involved?

At the heart of the tumult is Lam, who was elected chief executive in 2017 by a pro-Beijing committee. In Hong Kong, the chief executive is determined not by a general vote but by a group of about 1,200 people consisting of prominent professionals and members of the Legislative Council.

In Race For New Leader, Many In Hong Kong See 'Selection,' Not Election

In A Pro-Beijing Neighborhood Of Hong Kong, Protesters Are Unwelcome

Lam developed a strong relationship with Beijing during protests in Hong Kong that erupted in 2014. At the time, she was second in command and had proposed another series of controversial changes that would have allowed Chinese authorities to select the candidates for chief executive. Her proposal foundered in the face of massive demonstrations and eventually was withdrawn.

Lam has been backed by pro-Beijing lawmakers, who enjoy a majority in the Legislative Council, and by activists who have recently held counterprotests of their own in Hong Kong as well as in cities ranging from Vancouver, Canada, to London.

Behind them is the police force in Hong Kong, which has come down hard on demonstrators, using tear gas, rubber bullets and what some — including the Hong Kong Bar Association — have criticized as "wholly unnecessary force against largely unarmed protesters." Opposition lawmakers on Tuesday released a closed-circuit TV video showing two officers in a hospital beating a detained man, reportedly in his 60s, and appearing to punch him repeatedly in the crotch and stomach while he is still on a gurney.

Shocking footage released by lawmaker Lam Cheuk-Ting shows two policemen in uniform beating a detained man after he was arrested and brought to hospital. Victim was repeatedly punched in the crotch and stomach, and had a torch flashing right in his eye. #HongKongpic.twitter.com/nffwRiQG8e

Shortly after the video's release — and about two months after the incident occurred — the Hong Kong government said in a statement that authorities are "highly concerned" and are investigating it as a criminal matter.

On the side of the opposition are lawmakers such as Yeung, whose Civic Party has pushed back hard against the extradition bill. It also includes a pro-democracy group known as the Civil Human Rights Front, which has published protesters' demands and organized several of the biggest protests, such as one last Sunday that it says attracted 1.7 million people out of a region of some 7.5 million.

How has Beijing reacted?

The reaction in mainland China has shifted generally from indifference to outright hostility, with authorities first ignoring the protests, then misrepresenting them and lately rejecting them entirely.

"Beijing [now] sees the unfolding crisis as something that is really destabilizing and challenges its rule, its control," China specialist Adam Ni told NPR's Emily Feng this month.

Pouring rain in #HongKong but tens of thousands still protesting today... chanting ‘Hong Kong people, keep going’. The rally is seen as a measure of public support for the protest movement, after 11 consecutive weekends and increasingly violence. @NBCNews@NBCNightlyNews@MSNBCpic.twitter.com/N1wmMC1eU8

"The recent protests and demonstrations in Hong Kong have turned into radical violent behaviors that seriously violate the law, undermine security and social order in Hong Kong and endanger local people's safety, property and normal life," Hua Chunying, a spokesperson for the Chinese Foreign Ministry, said at a news conference this month.

She said Beijing "firmly supports" Lam and the police "in strictly enforcing [the] law." To this point, Chinese authorities have not indicated whether they plan to intervene in the situation more directly.

"I need to reemphasize a plain truth," she added less than a week later. "Hong Kong is part of China, and its affairs are entirely China's internal affairs."

Beijing's effort to cultivate a counternarrative ran into some pushback from social media companies, though. On Monday, Twitter said it was suspending nearly 1,000 accounts suspected of being linked with China and part of a "coordinated state-backed operation," and Facebook announced the removal of several pages and accounts "involved in coordinated inauthentic behavior as part of a small network that originated in China and focused on Hong Kong."

Have any other countries gotten involved?

At least to this point, foreign intervention has been limited to words of caution and condemnation.

Most notably, President Trump, whose administration is embroiled in a deepening trade war with China, has encouraged Beijing to "work humanely with Hong Kong" and even suggested that Chinese President Xi Jinping meet personally with the protesters.

Chinese officials have bristled at suggestions such as these, repeatedly asserting that "Hong Kong affairs are entirely China's internal affairs" and that, effectively, the rest of the world needs to mind its own business.

This isn't the first time Hong Kong has seen this kind of unrest, is it?

Hong Kong is less than five years removed from another wave of massive protests in 2014 collectively known as the Umbrella Movement. For nearly three months, Hong Kong saw a series of sit-ins, rallies and road-clogging demonstrations. Several of the protest movement's organizers were sentenced to prison time earlier this year for their role in the demonstrations.

What's At Stake For Hong Kong?

In fact, Hong Kong has seen several spasms of unrest since the U.K. handed the region back to China in 1997. The handover agreement specified that Hong Kong is to be a "special administrative region" within communist China, enjoying a "high degree of autonomy" — including the freedom to maintain its own economic and legal systems. In a word, Hongkongers were promised "one country, two systems."

It hasn't exactly worked out that way, however.

Hongkongers have complained of encroachment by Beijing since virtually the region's handover. Those complaints have grown louder in recent years, particularly after a spate of Hong Kong booksellers disappeared, only to turn up later in police custody in mainland China. Critics of the extradition bill believe such incidents presage what the future might look like if the measure were ever to become law.

What's with all those umbrellas?

This one, at least, is really rather simple. They're for protection — and not just from the elements. Protesters have been using umbrellas to shield themselves from police cameras and the deployment of pepper spray and tear gas to disperse the crowds.

Their near-ubiquitous use in 2014 lent a name to that 79-day movement. And now that people have returned to the streets, the umbrellas have too.