When Everybody Wants A Piece Of 'God's Country' 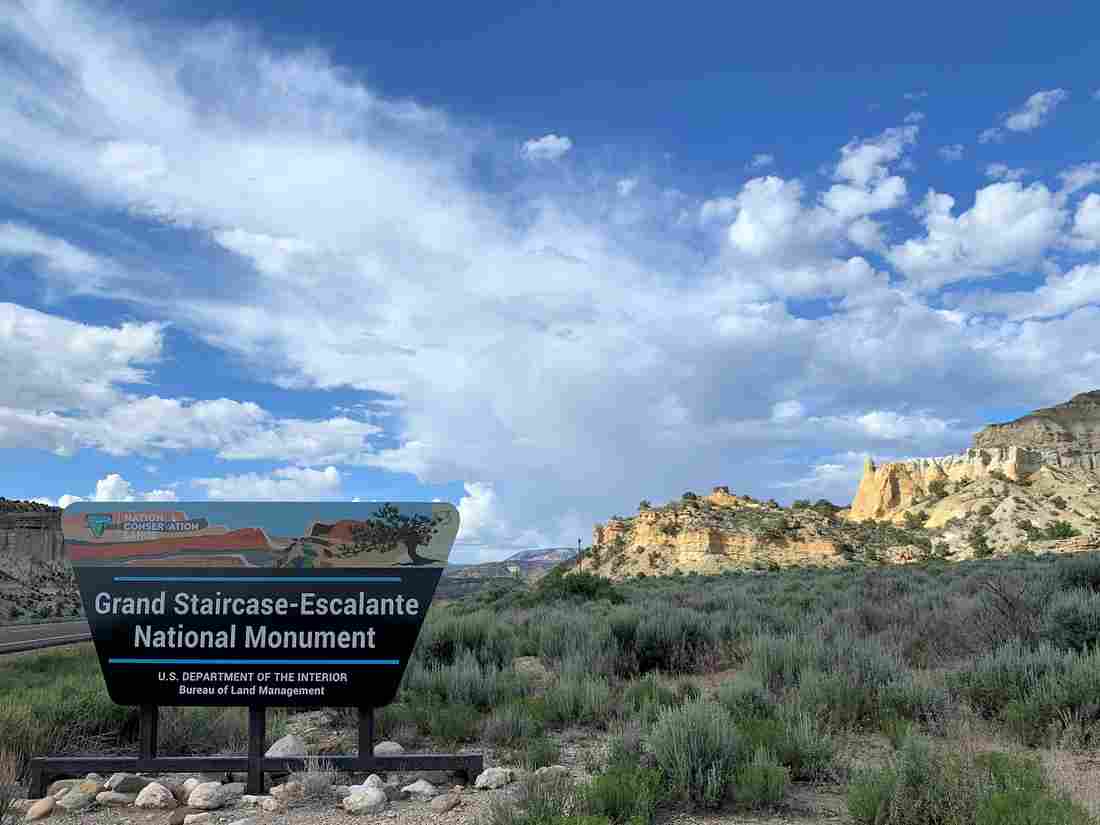 since its designation in 1996. Kirk Siegler/NPR hide caption 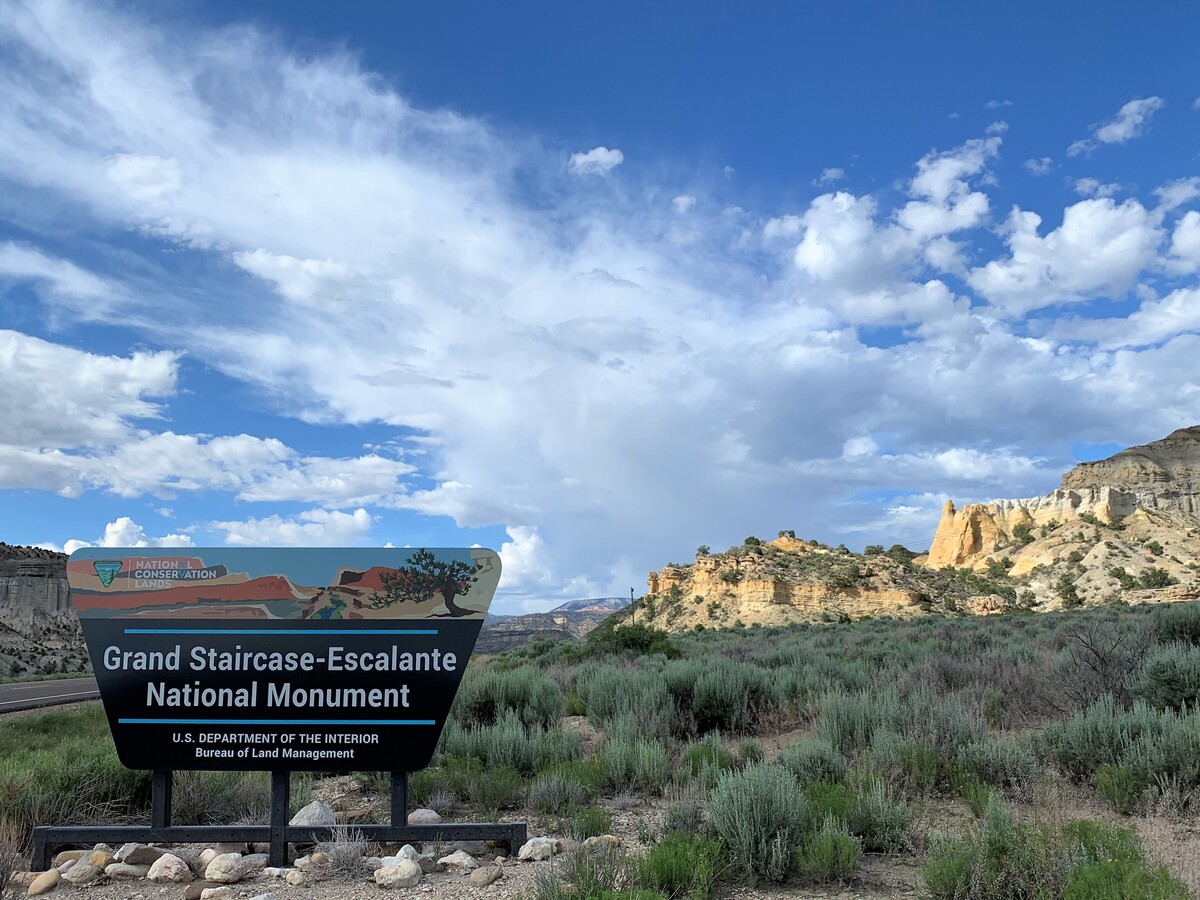 Located between Capitol Reef and Bryce Canyon and Zion national parks, the Grand Staircase-Escalante National Monument has become a big tourist draw since its designation in 1996.

Three hundred miles south of Salt Lake City, the Grand Staircase-Escalante National Monument is at the heart of some of the most remote terrain in the lower 48. Famous for its red rock canyons, arches and fossil beds, the rugged land is punctuated by sites like Death Ridge, Carcass Canyon and Hell's Backbone Road.

Those names staked on the old maps by the region's first white settlers tell you all you need to know about how harsh, brutal — and beautiful — the land is.

"Them old cowboys back in those days, they were tough," says Shannon Steed, a businessman and armchair local historian.

Steed comes from a long line of Mormon pioneers: the cowboys and loggers who helped tame this country, as locals put it, and scratch out a living from it.

His hometown Escalante, population 800, along the meandering Escalante River is ringed by mesas.

The town has long struggled economically, especially since its timber mill closed in the 1990s — Steed's father ran it. Depending on who you ask, things got even worse, when President Clinton protected much of the area as a national monument in 1996.

Today, it remains a flash point for one of the rural West's perennial and most polarizing fights - who gets to do what on federal public lands.

In December 2017, President Trump signed a proclamation shrinking the protected boundaries of the GSEM nearly in half. This summer, the administration is moving ahead with plans to open up parts of it to mining and expanded cattle grazing, despite legal challenges and a recent effort by Democrats to thwart the move.

The latest battle over the Grand Staircase is reigniting a decades-old debate about the future of the rural communities in and around the monument, which have lately seen an influx of newer residents setting up businesses around tourism.

On the outskirts of town, Steed points out a closed down timber mill his dad used to own. Up to his left is a large "E" painted on the side of a hill.

"It doesn't stand for environmentalist," Steed says. "It stands for Escalante."

In some corners of this town, environmentalist is still a dirty word.

"We've always said it's God's country," Steed says. "The people from out here said that's because nobody'd have it but God, and now it seems like everybody wants it." 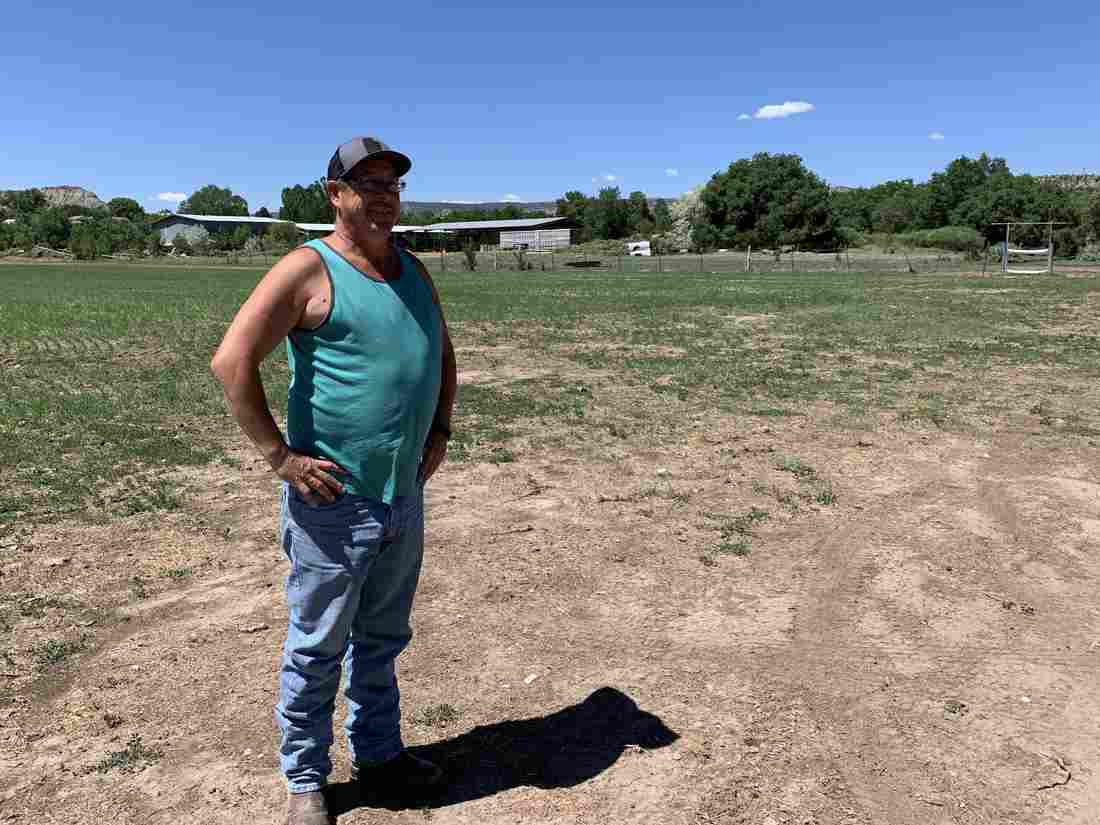 Shannon Steed stands on land that used to house his father's sawmill. The mill closed in the early 1990s due in part to a lack of available timber supply from nearby National Forest lands. Kirk Siegler/NPR hide caption 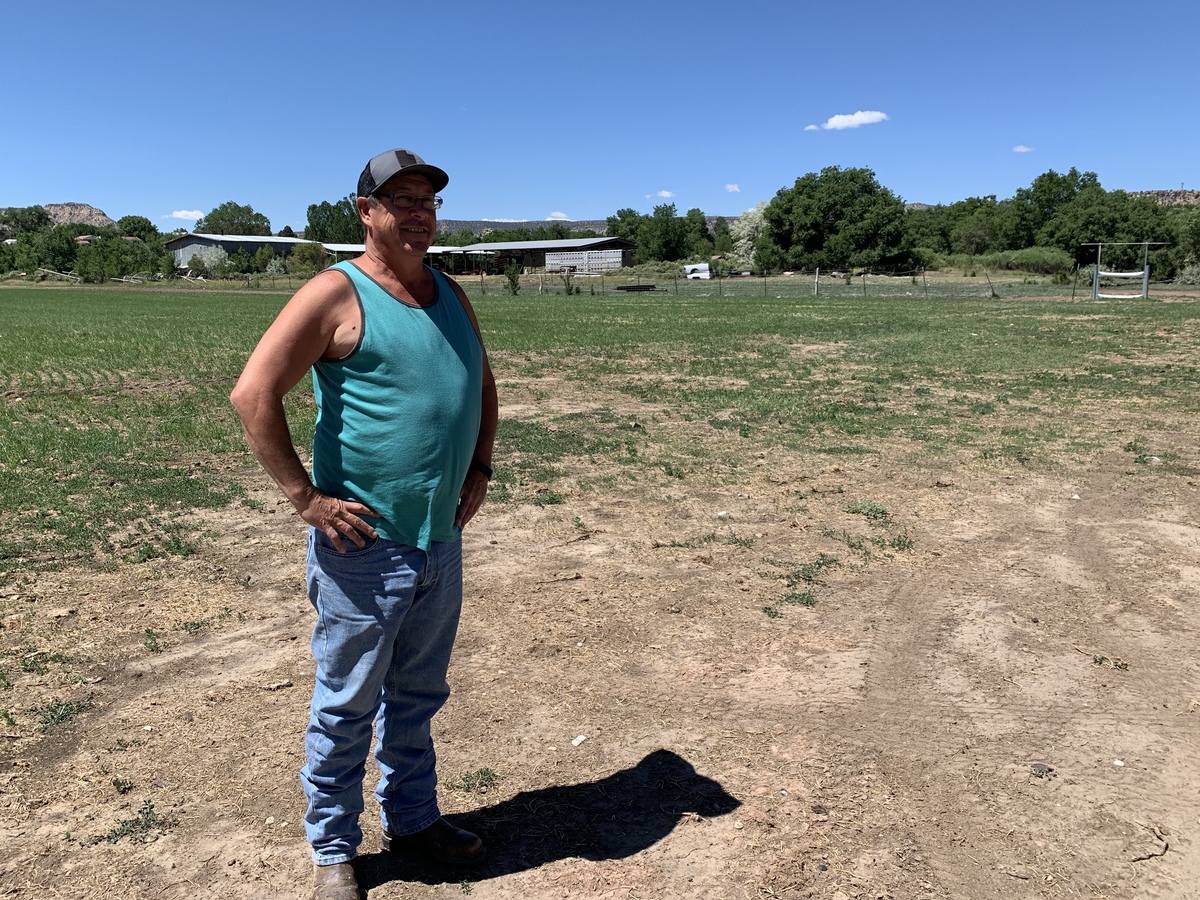 Shannon Steed stands on land that used to house his father's sawmill. The mill closed in the early 1990s due in part to a lack of available timber supply from nearby National Forest lands.

From Steed's perspective, the environmentalists won the land in 1996 when President Clinton designated it the largest national monument in the country.

The original designation protected roughly 1.7 million acres (Congress later added to it to make it 1.9 million).

"He just made a big land grab out of it and locked it all up," Steed says.

If Trump's proclamation holds in court, and the monument is downsized into three smaller units, much of the land could be reopened to mining. Nearly two dozen mining claims have already been filed, mostly from locals. One Canadian company looked into mining cobalt after Trump's proclamation. There is also believed to be extensive coal reserves but there are long-standing questions about its economic viability.

And then there are the ranchers who lease federal public land around in and around the monument to graze livestock. When Clinton designated the monument, most existing grazing leases were grandfathered in. But no new leases were to be issued. That could soon change.

Todd Phillips is a rancher who's grazed his cows on the monument land for years. But he's not betting his future on expanded grazing within the monument.

"I think it depends a lot on the election," Phillips says. "I think if a Democrat gets in, I think they're gonna put it back like it is and probably then some just to prove a point."

Congressional Democrats just ordered an investigation. They claim the Trump administration illegally appropriated funds to redraw the monument boundaries based on where they could lease land to industry.

They really do, they actually hate us.

On the ground, federal land managers say they are just following orders from above as the ligation plays out in federal court. They're currently drafting a plan for how the land, and underlying resources, will be used.

"We've been told by those above us that we need to get this plan written," says Harry Barber, the acting manager of the monument for the Bureau of Land Management. "We'll do it until we're told not to."

Utah - with its conservative politics, its world famous national parks and monuments and its history of a robust environmental movement - is one of the most tense states in the nation when it comes to control of federal public land. Utah elected leaders are often seen as at the forefront of the push to transfer vast amounts of public land to state or private control.

In Escalante, locals like Shannon Steed and Todd Phillips see their rural heritage as being under threat.

"Some of these guys, these radicals, aren't gonna be happy until there isn't any cows left on public land," Phillips says.

Steed agrees. "They really do, they actually hate us."

But this isn't just an ages-old western tale pitting rural ranchers against influential environmentalists from liberal cities like San Francisco or Washington D.C. Today Steed and Phillips now share their communities with a diverse set of folks. More recent transplants are running businesses that have sprung up since the monument was created: from the James Beard finalist, farm-to-table restaurant to modern hotels and vacation cabins to the thriving Escalante Outfitters, owned by Nathan Waggoner and his family. 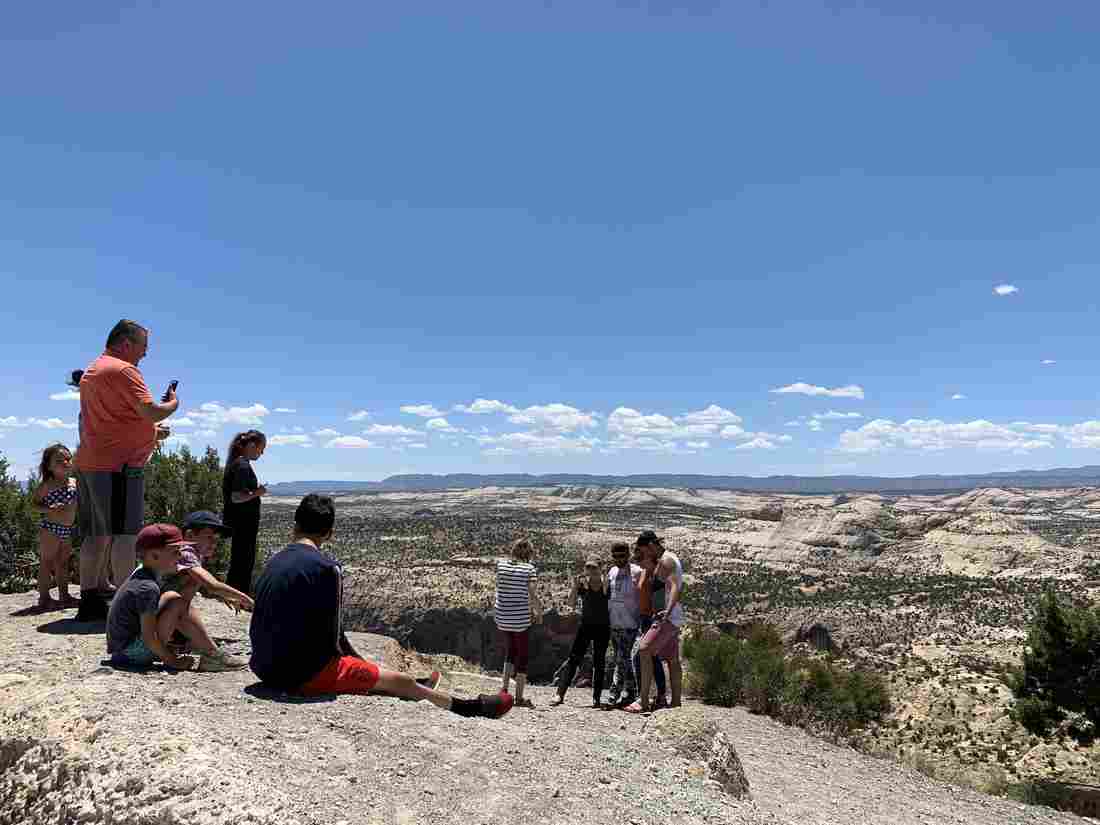 Located between Capitol Reef and Bryce Canyon and Zion national parks, the Grand Staircase-Escalante National Monument has become a big tourist draw since its designation in 1996. Kirk Siegler/NPR hide caption 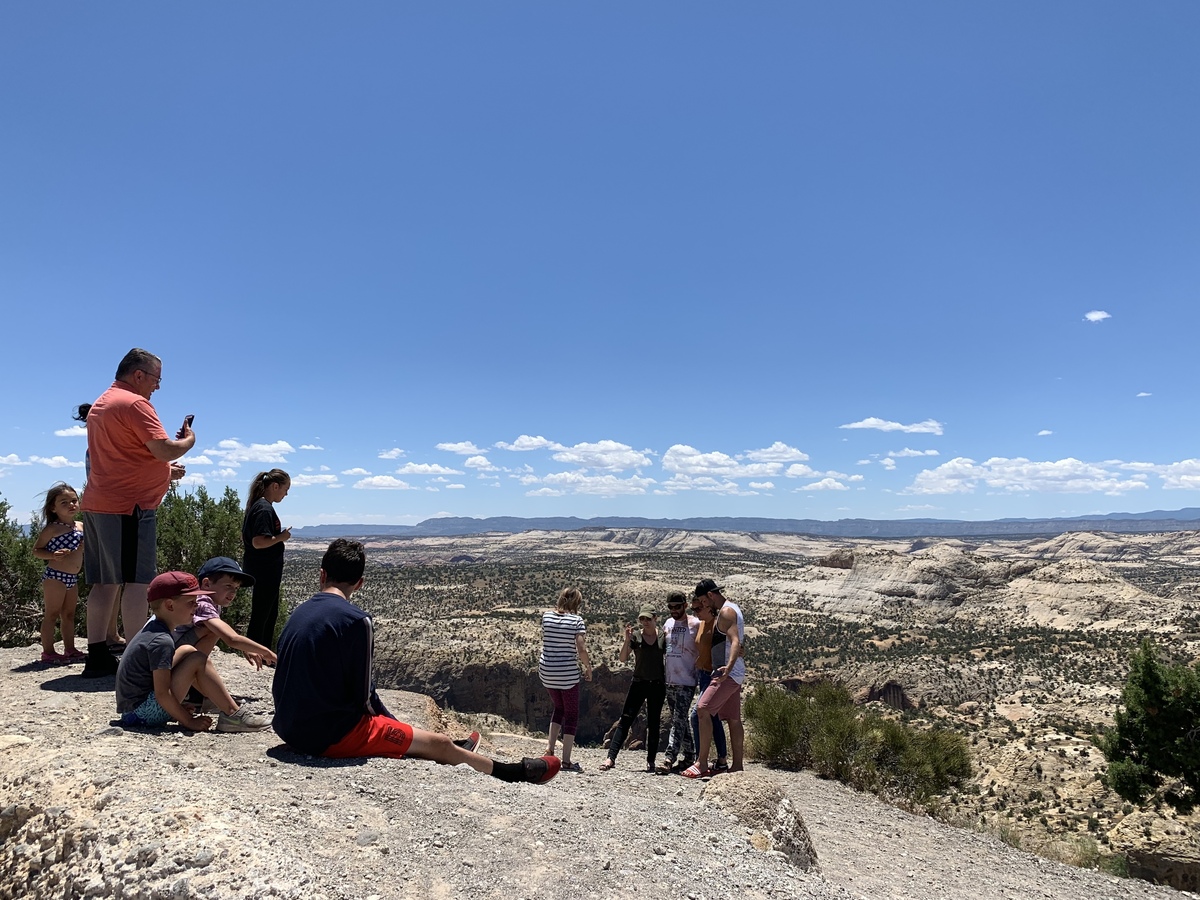 Located between Capitol Reef and Bryce Canyon and Zion national parks, the Grand Staircase-Escalante National Monument has become a big tourist draw since its designation in 1996.

Waggoner worries that a new mine or more cattle could turn the protected land into an industrial zone and drive the tourists, and his source of income, away. He employs more than two dozen people who work in his outdoor gear shop, cafe, cabins and outfitter. Increasingly, the traditional tourist season is expanding in length, meaning only a couple of lean months a year when the business may close.

That's really hard to have a small business in America with such big strings being pulled.

Since Trump signed the proclamation at the Utah state capitol in December 2017, Waggoner says he's been operating in a state of constant uncertainty.

"That's really hard to have a small business in America with such big strings being pulled," he says.

Waggoner joined one of the lawsuits filed by a local environmental group called Grand Staircase-Escalante Partners. They're arguing President Trump illegally usurped Congress by shrinking Escalante and the nearby Bears Ears monuments' boundaries. Legal experts have widely held that, under the Antiquities Act, a president can designate a monument but only Congress has the power to shrink it.

When she first moved to Escalante in 2007, says Nicole Croft, executive director of Grand Staircase-Escalante Partners, the monument designation was so controversial that "you did not tell people you moved here because of the monument."

So instead she would give the other reason she moved — her son's asthma. She wanted to escape the winter smog in Salt Lake City and raise her family in a small town.

Croft says politicians are stoking the fight over the monument, playing on people's fears of economic uncertainty.

"Grazing represents the pioneer spirit and the hard-scrabble heritage that Mormon people are really proud of," Croft says. "You know, that's part of my Mormon heritage that I'm very proud of. "

Mistrust of the federal government also runs deep in that Mormon heritage. Especially in southern Utah, where in the 1800s, the feds dispatched troops to stop the settlers from practicing polygamy.

For Nicole Croft, anti-government leanings may be behind the resistance to a changing economy. It's a phenomenon that's occurring across the rural West where once-natural resource dependent towns are transitioning to more recreation and amenities, sometimes to the chagrin of families who've worked the land for generations.

The new tourism jobs don't tend to pay as well as jobs in the mining sector. But, since the Grand Staircase monument was designated, this isolated region's population has actually grown, alongside a 24% increase in new jobs.

Even Shannon Steed, the longtime local, relies on tourism. He runs wild west-themed shows, tours of dinosaur fossil beds and petrified forests and rents out restored farm houses on Airbnb. But he says there's a catch.

More mining and ranching could coexist here with the tourism, Steed says. It's an argument that will be debated into 2020 and beyond.