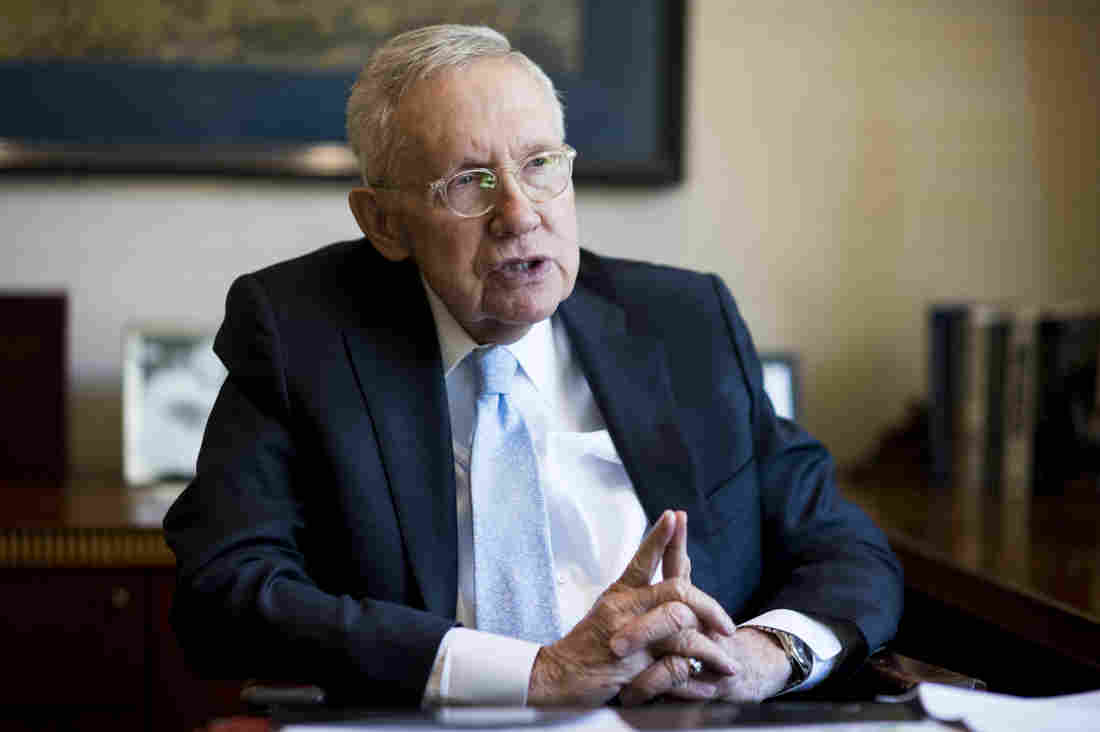 "The filibuster has been used as a weapon to just have the Senate do nothing," former Senate Majority Leader Harry 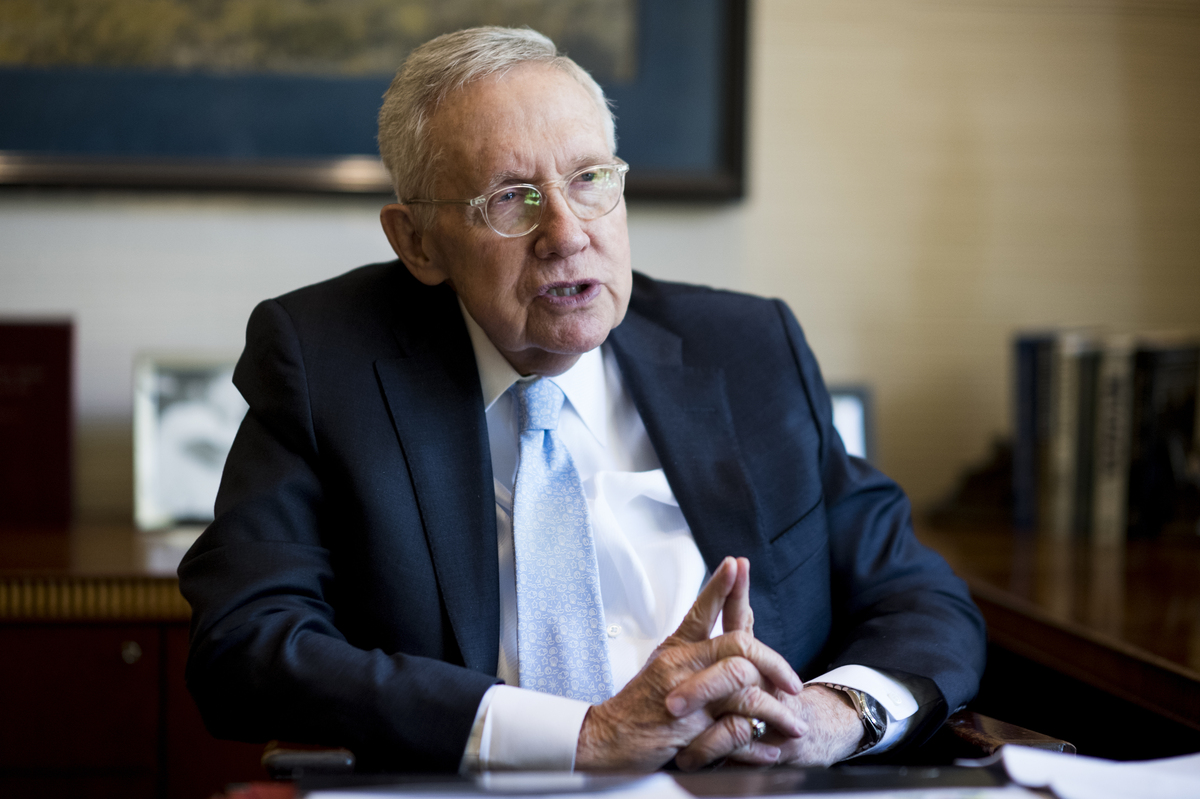 "The filibuster has been used as a weapon to just have the Senate do nothing," former Senate Majority Leader Harry Reid, D-Nev., told NPR.

At 79, Harry Reid may be retired, living in a gated community in Henderson in his home state of Nevada, but his national political shadow looms large.

He spent 34 years in Congress before retiring his position of Senate minority leader in 2017. He built a machine for the Democrats in Nevada that ultimately delivered the battleground state to Hillary Clinton in 2016 and the Democrats in the 2018 midterms. He had a reputation for being a tough politician who did what was necessary to get what he thought needed to be done, done. Even if sometimes that meant calling his opponents names, changing rules or, pushing the narrative that Mitt Romney didn't pay taxes without furnishing any evidence to back up the claim.

Today, Reid is still battling cancer. He's in chemotherapy but he says the prognosis is good. He's less mobile then he used to be and had to quit doing yoga with his wife. He spends a lot of time reading. But even in retirement he's still involved in politics, sharing ideas, he says, to colleagues in Washington and speaking to front-runners in the Democratic primary.

In a wide-ranging conversation, Reid spoke with NPR about taking President Trump's potential reelection seriously, the urgency of climate change and getting rid of the filibuster entirely — the Senate threshold of 60 senators to advance a bill.

You want to get rid of the filibuster entirely in the Senate. Does this set a dangerous precedent?

If you look at where the filibuster came from, we didn't have one until 1917 and it was developed to cut off debate because it could go on forever. What has happened now is the filibuster has been used as a weapon to just have the Senate do nothing.

It used to be that the Senate worked quite well. The filibuster was there, but it was used on a basis of collegiality. It wasn't used very often. When something was extremely important to a member, they would exercise their rights, but it didn't bring the Senate to a standstill forever. Right now, the 60-vote threshold is what everything is now. Everything is 60 votes, everything.

So, I moved to change the rules, as a result of that, Obama got his hundred-plus judges and his Cabinet spots filled. ... It was the right thing to do. Now, that wasn't the first time the rules have been changed, they've changed lots of times in the past. But I think that now, with the Senate being basically inoperable because Republicans in Congress after Congress have just refused to get anything done. People are not able to offer amendments. It's just not good for the country. I think we need to take a very close look at getting rid of the filibuster, period.

Doesn't that create a situation where one party gets to railroad the other party depending on who is in charge of that upper chamber?

It's important, because let's take some major issues the country faces. No issue in my mind is more important than climate change. It is devastating our world. The United States must be a leader in this. But with Trump and basically Republicans saying that climate change doesn't exist, we're getting nothing done, I mean nothing, we don't have a lot of time to spare. Take something like guns. Now, it doesn't matter how you feel about the Second Amendment, the fact is 90 percent of the American people believe there should be background checks for people that are crazy or criminals, but we can't get it done in the Senate. The filibuster should go so we can get something done on guns.

How difficult do you think this race against President Trump is going to be?

I think that anyone who thinks it's going to be a walk in the park are wrong. No one should discount Donald Trump. He's spent a lifetime developing who he is. And I wish he were somebody else, but he's somebody that has been able to focus on race. He focuses on the environment, but the wrong way. He focuses on the economy, I think in the wrong way. These tariffs are not only hurting America, they're hurting the world. So I think that his simplistic views on the world translate to people not wanting to focus real hard on what needs to be done to help this country. So don't discount him. He's going to be hard to beat.

On his former Republican colleagues

I'm really, frankly, disappointed in some of them, names which I won't mention, who've become such lapdogs for President Trump. That's so unlike what I thought they would be.

On whether he misses Capitol Hill

You had such a long, storied political career. When you look back is there anything that you regret?

Oh, sure. I sure do. The biggest regret I have is having voted for the Iraq War. I was misled. ... But I learned quickly that I made a bad decision. So I spent a lot of my career, after a couple weeks, criticizing the war — the worst foreign policy mistake this country ever made. It's destabilized the Middle East. We may have had some autocratic governments there but at least they were stable. We destabilized the whole area leading to the deaths of hundreds of thousands of people. The migration of millions of people. ...

The rest of the stuff, I've kind of come to the conclusion a long time ago that there's no need to rehash what I did. I did it.

As He Leaves The Senate, Harry Reid Says He's 'Hopeful' On Trump

6 Things You Might Not Have Known About Harry Reid

When you look at the future of this nation what worries you the most?

Well, I have a number of concerns. I have to be concerned about climate change. We're here in the deserts of Nevada as we speak, but we have storms here we never had before. We have wildfires we never had before. And they're coming more often. The fire season is now 40 days longer than it was just 10 years ago. So climate change for Nevada, our country and the rest of world is something we have to dial up. It's really, really important. We don't have a lot of time to deal with it before it's too late.

I believe that this may sound unusual coming from me, having served in Congress for 34 years, but I'll tell you right now I think the debt this country is incurring is very, very unhealthy. We should start talking about that. Where are my Republican colleagues? When I went to Congress, and for many years thereafter, that's what they talked about, the debt. I never hear a peep out of them now. Trump is running this country into such grossly unfair debt that it's going to be generations to get out of that. I think that the immigration situation is something that we cannot ignore. We've got to do something about it and we've just passed the buck for far too long. Building a wall is not going to make it any better.

NPR's Ian Stewart and Evie Stone produced and edited this story for broadcast.