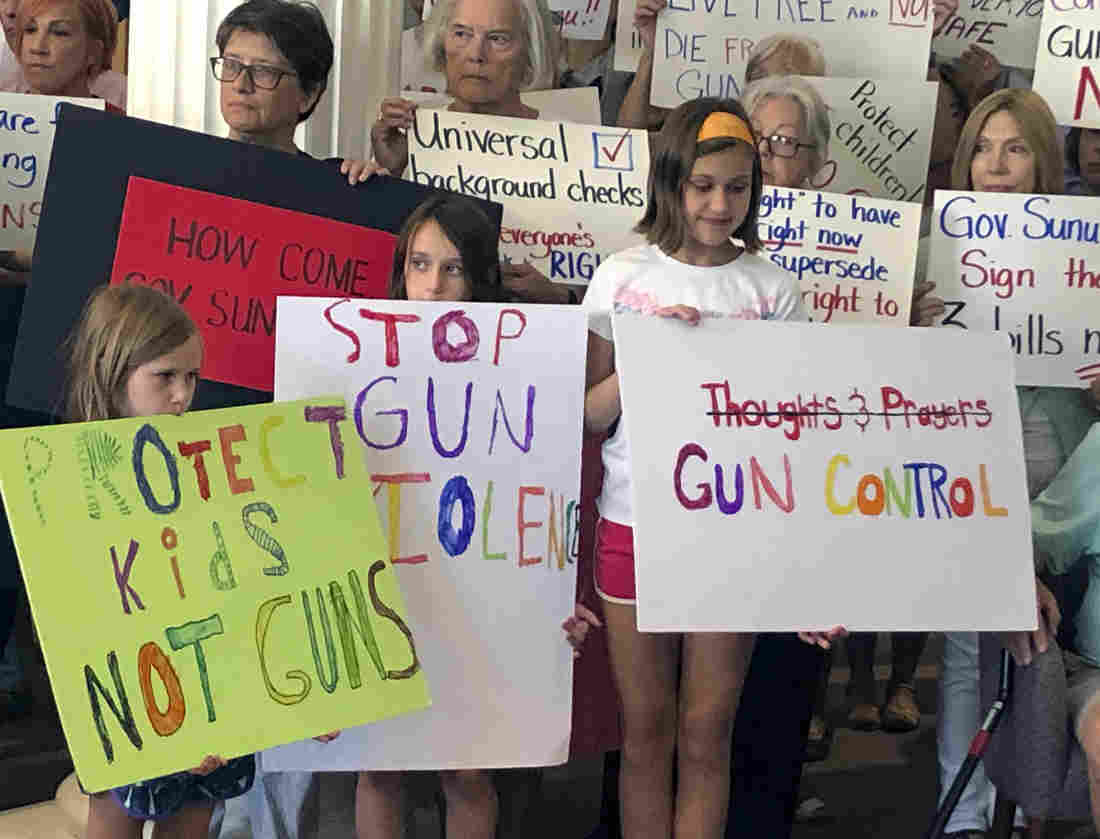 Supporters of gun control measures gather at the Legislative Office Building in Concord, N.H., in August, to urge Republican Gov. 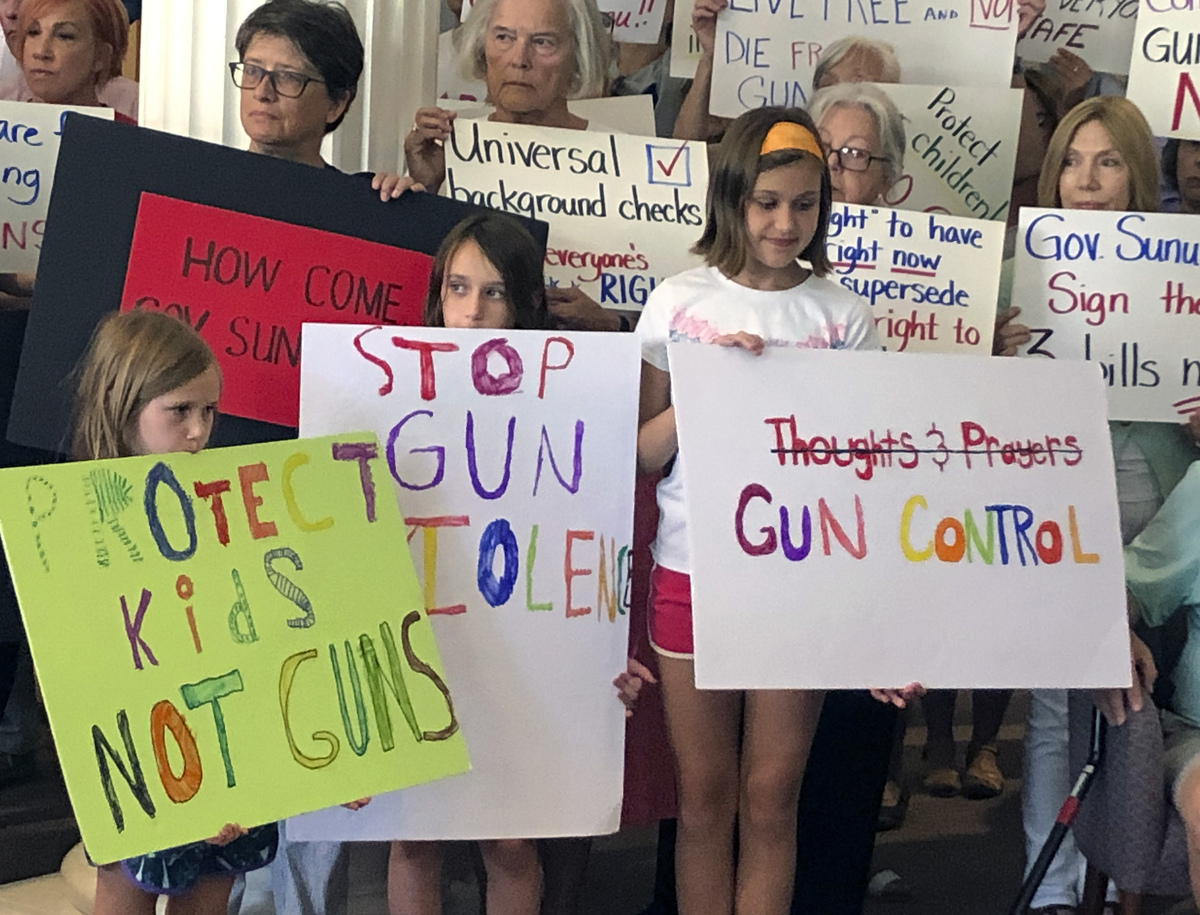 Supporters of gun control measures gather at the Legislative Office Building in Concord, N.H., in August, to urge Republican Gov. Chris Sununu to act after mass shootings in Texas and Ohio.

The percentage of Americans who favor stricter gun laws is on the rise, though significant partisan divisions persist. A Pew Research Center survey conducted in September found that 60% of Americans say gun laws should be tougher, up from 57% last year and 52% in 2017.

The study, released this week, indicates that while a solid majority of Americans favor stricter gun laws, support remains split down party lines. Eighty-six percent of Democrats and Democratic-leaning independents said gun laws should be stricter than they are today, compared with 31% of their Republican counterparts. 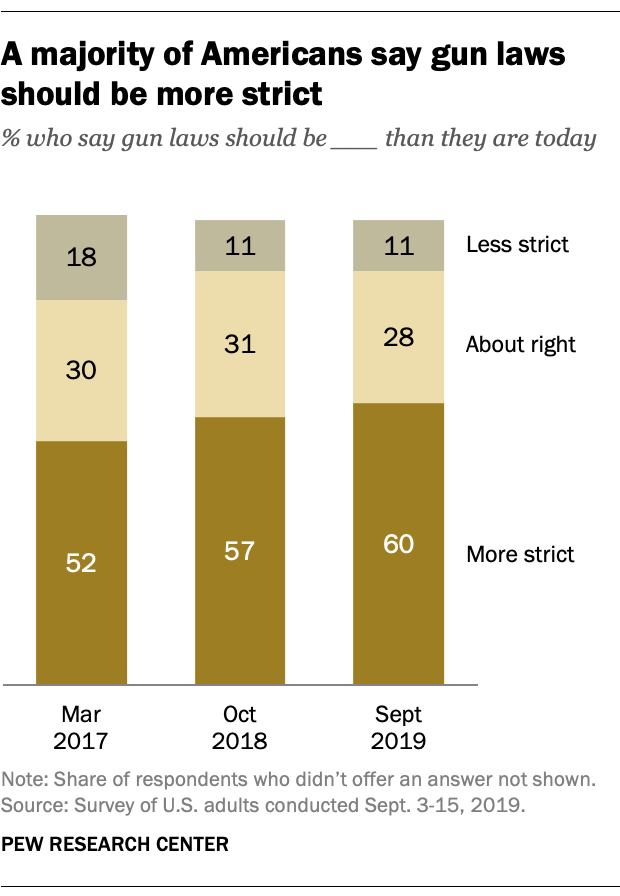 Large majorities of Democrats and Republicans somewhat or strongly support barring people with mental illnesses from purchasing guns, as well as making private gun sales and sales at gun shows subject to background checks. But when it comes to banning high-capacity ammunition magazines and assault-style weapons, the parties diverge: Nearly 9 in 10 Democrats favor each of these proposals, compared with roughly half of Republicans.

The number of states with red flag or extreme-risk laws, which allow courts to order the seizure of firearms from those believed to pose an imminent danger to themselves or others, has increased since the 2018 school shooting in Parkland, Fla., that left 17 people dead and 17 others injured. Before Parkland, only five states had red flag laws. By August 2019, 17 states and the District of Columbia had adopted them.

In Vermont, A Case Of One Man Whose Gun Was Seized Under Red Flag Law

An APM Research Lab survey released in August found widespread national approval of red flag laws, with 77 percent of Americans supporting family-initiated extreme risk protection orders and 70 percent in support of those initiated by the police.

Cassandra Crifasi, deputy director of the Johns Hopkins Center for Gun Policy and Research, told NPR in August that even people who generally oppose gun control might favor red flag laws because they are temporary and specific.

Protection orders "take guns out of the hands of those who should not have them without infringing on the rights of law-abiding gun owners," Dr. Mark Rosenberg, who oversaw gun violence research at the Centers for Disease Control and Prevention, told NPR in August.

The relationship between gun control and gun rights is one of the questions explored in the Pew survey. Overall, it found that 53 percent of Americans believe it is more important to control gun ownership, while 47 percent say it is more important to protect the right of Americans to own guns. Men are more likely to favor protecting gun rights, while women are more likely to favor controlling gun ownership. 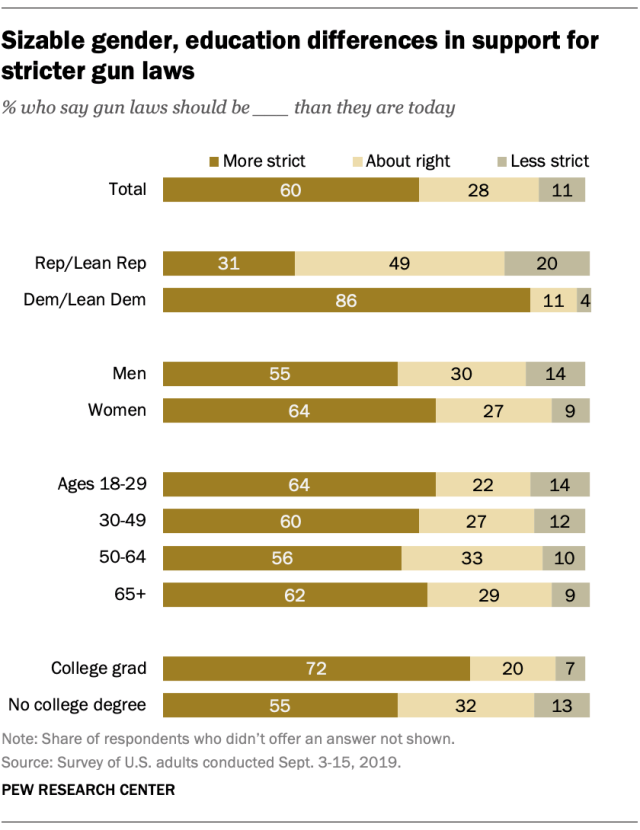 "It's not about solving individual problems, it's about changing the dynamic, changing the trend lines," Newsom said as he signed the bills.

Despite growing national support for stricter gun laws, such legislation still generates controversy. One of these bills, AB 61, is facing criticism from both the National Rifle Association and the American Civil Liberties Union for expanding California's red flag law. It will enable employers, co-workers, employees and teachers — not just family members and police officers — to seek gun violence restraining orders from people they see as posing a potential threat.

The ACLU believes this law "poses a significant threat to civil liberties" and has voiced concern that people in this expanded category may lack "the relationship or skills required to make an appropriate assessment." The NRA described the new laws as "continuing the assault on our Second Amendment rights in the Golden State."

There were 57,473 gun violence incidents in 2018, according to the Gun Violence Archive, an independent data collection and research group that collects gun violence numbers from law enforcement, media, government, and commercial sources.

Pew results come from a survey of 9,895 U.S. adults conducted from Sept. 3 to Sept. 15. The margin of sampling error for the full sample of 9,895 respondents is 1.5 percentage points.