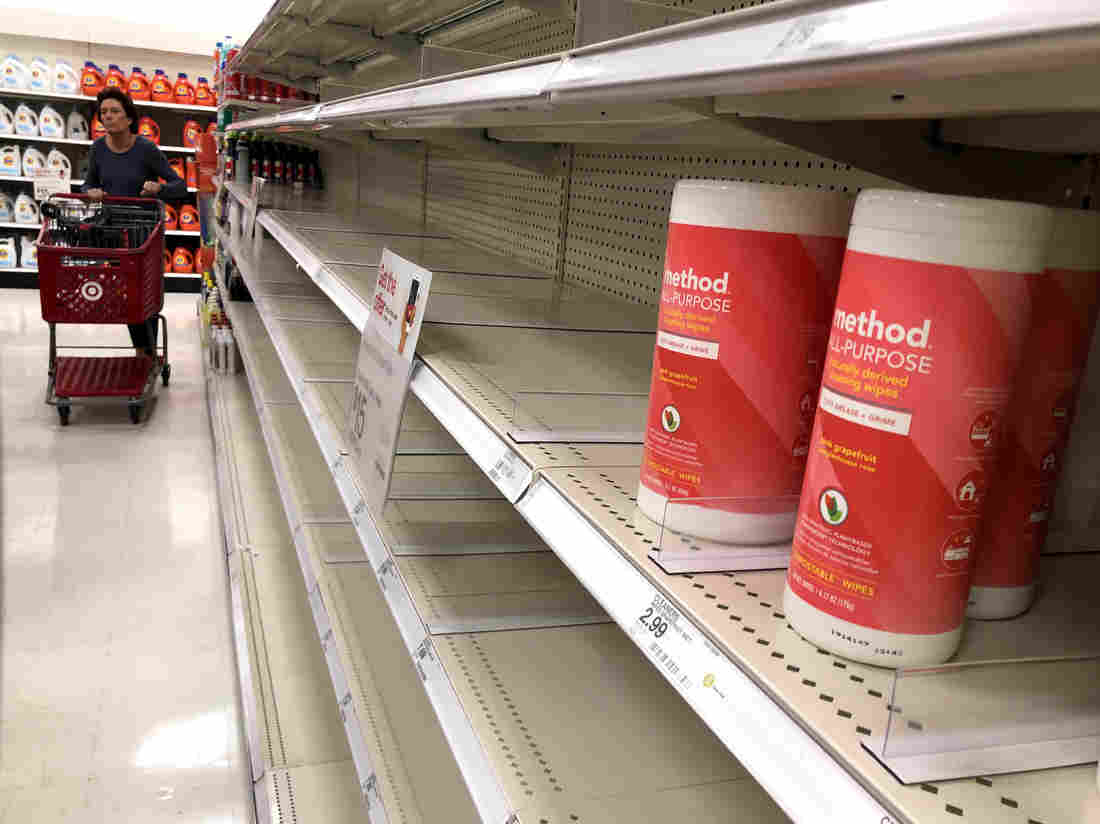 Fears of the virus have prompted shoppers to stock up on sanitizing options, leaving shelves of disinfectant wipes nearly empty at a Target store in Novato, Calif. Justin Sullivan/Getty Images hide caption

Fears of the virus have prompted shoppers to stock up on sanitizing options, leaving shelves of disinfectant wipes nearly empty at a Target store in Novato, Calif.

The U.S. death toll from COVID-19 has risen to 11 people, after officials reported deaths in California and Washington state Wednesday. The most recent death is connected to a cruise ship that traveled from the U.S. to Mexico.

Officials in Placer County, Calif., say an elderly resident has become the first person to die from the illness in California. The patient, who was not identified, had underlying health conditions, the county says.

The patient had tested positive on Tuesday and "was likely exposed during international travel from Feb. 11-21 on a Princess cruise ship that departed from San Francisco to Mexico," according to a statement from Placer County.

It adds that the person had been in isolation at Kaiser Permanente Roseville.

Washington state raised its own death toll from COVID-19 to 10 people earlier Wednesday. The state now has 39 confirmed cases of the coronavirus disease, with 31 of them in Seattle and King County. The other eight cases are in neighboring Snohomish County.

More than 230 people in Washington state are currently under supervision out of concern that they may have been exposed to the pathogen, the Washington Department of Health says.

The new numbers reflect a jump of 12 cases from Tuesday, when the state agency reported 27 cases and nine deaths. Many of the cases are linked to Life Care Center of Kirkland, Wash., the long-term care facility northeast of Seattle that is at the center of the outbreak in King County.

California has at least 53 positive cases, state health officials say, including 24 people who arrived in the U.S. on repatriation flights from outbreak locations in Asia.

The 29 other cases include seven people who were infected via person-to-person exposure, and 12 travel-related cases.

"Approximately 515 persons have been tested to date," the California Department of Public Health says.

Los Angeles declared a health emergency over the coronavirus Wednesday, citing the need to address the possibility of community transmission of the disease that has caused more than 3,200 deaths globally.

"I have signed a declaration of local emergency for the City of Los Angeles," Mayor Eric Garcetti announced via Facebook. "While there are only a few known active COVID-19 cases in the region, the declaration helps us access state and federal funding to strengthen and support our efforts to prepare our region and keep our communities safe."

Los Angeles County mirrored the city's move, in a step that the chair of the county's board of supervisors, Kathryn Barger, said was a planned reaction to the virus.

"This is not a response rooted in panic," Barger said, adding that the emergency declaration would help agencies coordinate their response and contain the virus in a county where more than 10 million people live.

COVID-19: 'We Can Push This Virus Back,' WHO Leader Says Of Coronavirus

One person has been hospitalized while five others are being monitored at home, Ferrer said. The county's first patient, a Chinese national who was diagnosed in January, has recovered from the virus, she said.

"Three of the new cases were travelers who were traveling together in northern Italy," Ferrer said at a news conference. Two others are relatives of a person who was infected with the coronavirus outside of the county, she said. The sixth case is a person who works in a field that exposes them to international travelers, Ferrer added.

The coronavirus disease has been blamed for nine deaths in the U.S. — all in Washington state

There are at least 80 confirmed cases of COVID-19 that originated in the U.S., the Centers for Disease Control and Prevention said in its latest update on the virus. That number doesn't include the 49 Americans diagnosed with COVID-19 who have been repatriated from outbreaks in Wuhan, China, and aboard the Diamond Princess cruise ship. Altogether, there are at least 129 cases in the U.S.

At least 13 states have reported coronavirus cases since late January. California has at least 29 cases, and Washington state has 27, according to the CDC.

While international travel has been linked to 24 cases, the cause of transmission is still under investigation in 40 cases – half of the national total. Person-to-person spread in the U.S. has caused infection in 16 cases, the CDC says.

The CDC data reflects numbers that were reported by 4 p.m. ET the previous afternoon – meaning the actual number of cases in the U.S. might be higher than the most recent posting by the agency.

"States are now testing and publicly reporting their cases," the CDC says. "In the event of a discrepancy, state case counts are the most up to date."