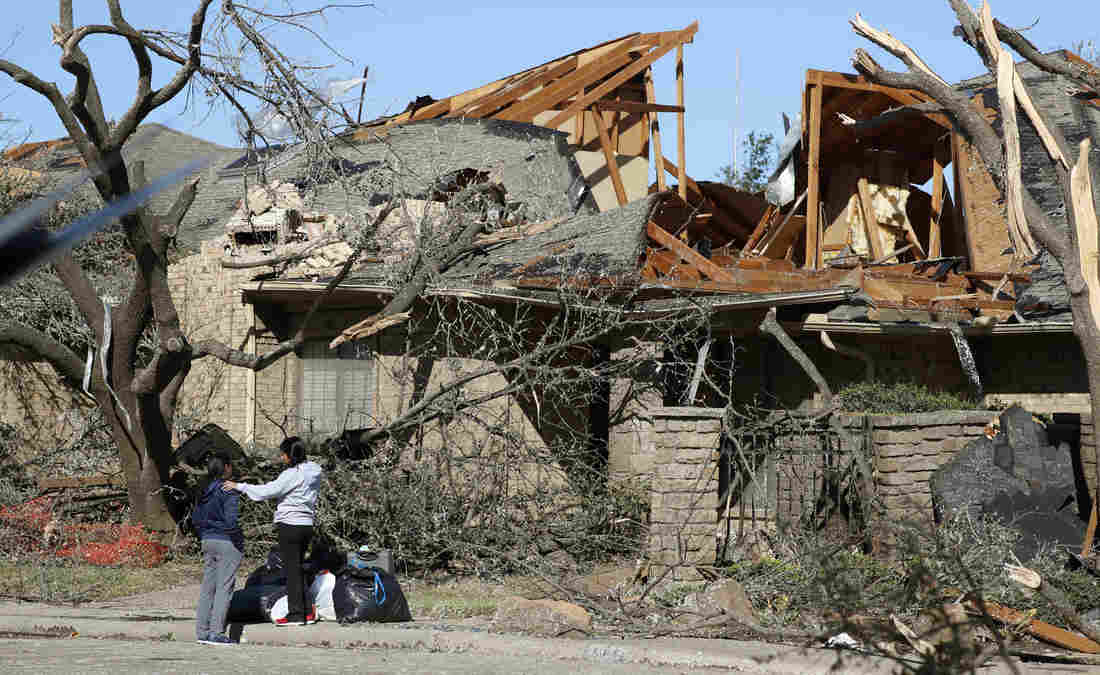 Women stand outside a house damaged by a tornado Sunday night in the Preston Hollow section of Dallas. The city

was still cleaning up on Monday. LM Otero/AP hide caption 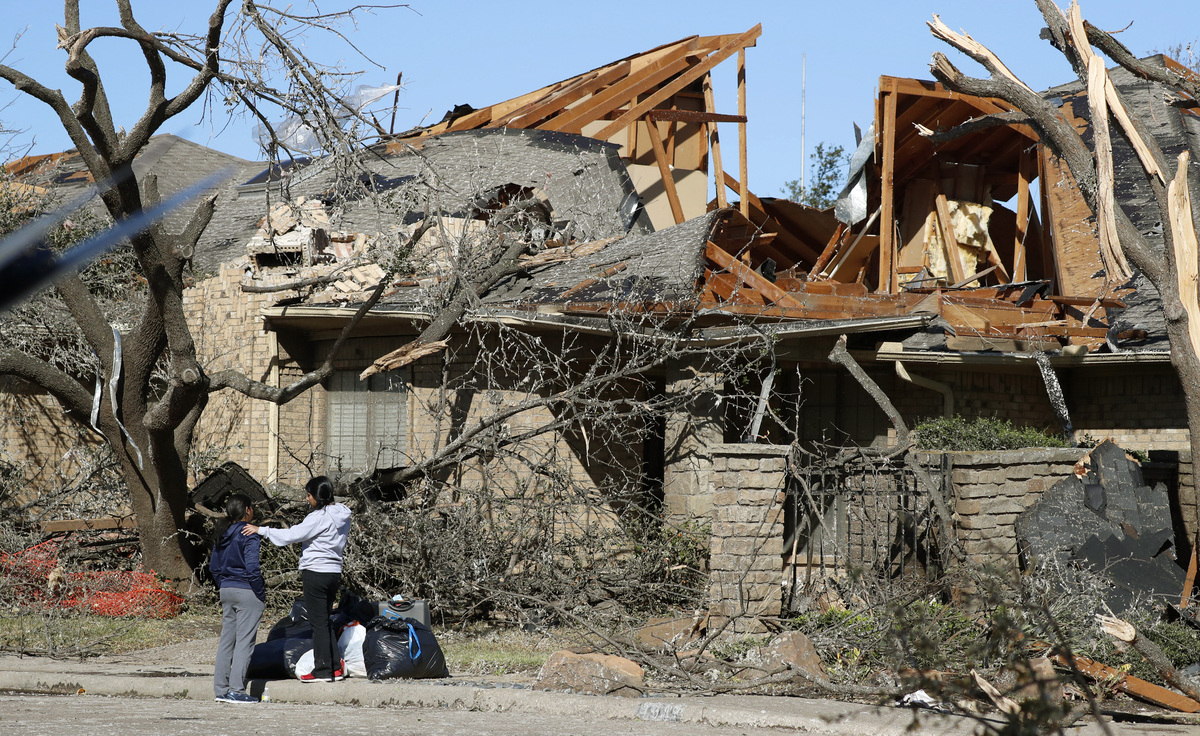 Women stand outside a house damaged by a tornado Sunday night in the Preston Hollow section of Dallas. The city was still cleaning up on Monday.

Local officials and emergency response personnel in Dallas are gauging the extent of damage inflicted by a powerful tornado that touched down in the city on Sunday night. While extensive structural damage was apparent by Monday morning, no fatalities or injuries have been reported.

"Considering the path the storm took — it went across a pretty densely populated part of our city — we should consider ourselves very fortunate we didn't lose any lives; [there were] no fatalities and no serious injuries," Dallas Mayor Eric Johnson said at a news conference Monday.

The twister touched down near Love Field airport at approximately 9 p.m. local time on Sunday and moved east, with a tornado watch continuing until 4:52 a.m.

Bianca Garcia, a meteorologist at the National Weather Service in Fort Worth, told NPR's Wade Goodwyn that several supercells developed west of the Dallas-Fort Worth area, with "at least one" producing a tornado, according to photos and videos. She said the NWS is working to confirm whether other tornadoes touched down in the area.

"These storms develop ahead of a strong cold front, and the environment was favorable for them to produce damaging winds, hail and even a tornado too," Garcia said.

Severe storms moved through the region into early Monday morning, causing additional damage in Arkansas and Tennessee. Officials in Arkansas confirmed one fatality and several injuries as a result of the storm, with one person killed after a tree fell on a home and at least two others injured when a gas station was destroyed. One person was killed in Oklahoma when trees fell on a mobile home. Memphis Light, Gas and Water reported up to 35,000 customers without power on Monday morning.

Here’s the latest update we have on the storm damage. Early this morning around 65k power customers in Dallas were without power. https://t.co/bc1AObHryQpic.twitter.com/tiK4tah0uy

Flights at Dallas-Fort Worth International Airport and Northwest Arkansas Regional Airport have been canceled and delayed. Most of the roughly two dozen people who sought shelter in Dallas overnight did so because of interrupted flights, according to Rocky Vaz, director of the City of Dallas Office of Emergency Management.

Vaz said the city's outdoor warning sirens were activated at 9:02 p.m. local time on Sunday night, just one minute after the National Weather Service sent out a tornado warning alert. The city opened Bachman Recreation Center as a shelter at 2 a.m., though only 23 people stayed there overnight, according to Vaz. He added that fewer than a dozen people remained there Monday morning.

Dallas Fire-Rescue Chief Dominique Artis said at the news conference that firefighters and police officers from Dallas and surrounding cities spent roughly six hours searching to make sure no one was trapped as a result of the storm, with efforts continuing into Monday morning. He said the department had received approximately 50 calls for downed utility wires and over 40 for gas leaks.

Oncor Electric Delivery said early Monday morning that nearly 112,000 Dallas-area customers were affected by power outages. By the time of the news conference, that number had dropped to 55,000. Vaz said approximately 100 traffic lights in the area were without power.

Emergency officials asked residents to be alert at intersections, and to stay away from structures that might be dangerous. Johnson warned people to be mindful of "not obvious damage," such as structural integrity issues or gas leaks that might not be immediately visible.

"We've dealt with property damage in this city before; we'll deal with it this time," Johnson said. "But our top priority has been making sure that everyone in our city is safe."

The Office of Emergency Management will continue to assess structural and property damage before exploring whether the state is eligible for disaster declaration and subsequent FEMA funding, Vaz said.

W. Nim Kidd, the chief of the Texas Division of Emergency Management, said at the news conference that 800 uninsured homes statewide would need to be destroyed or significantly damaged to meet the federal threshold for a disaster declaration.