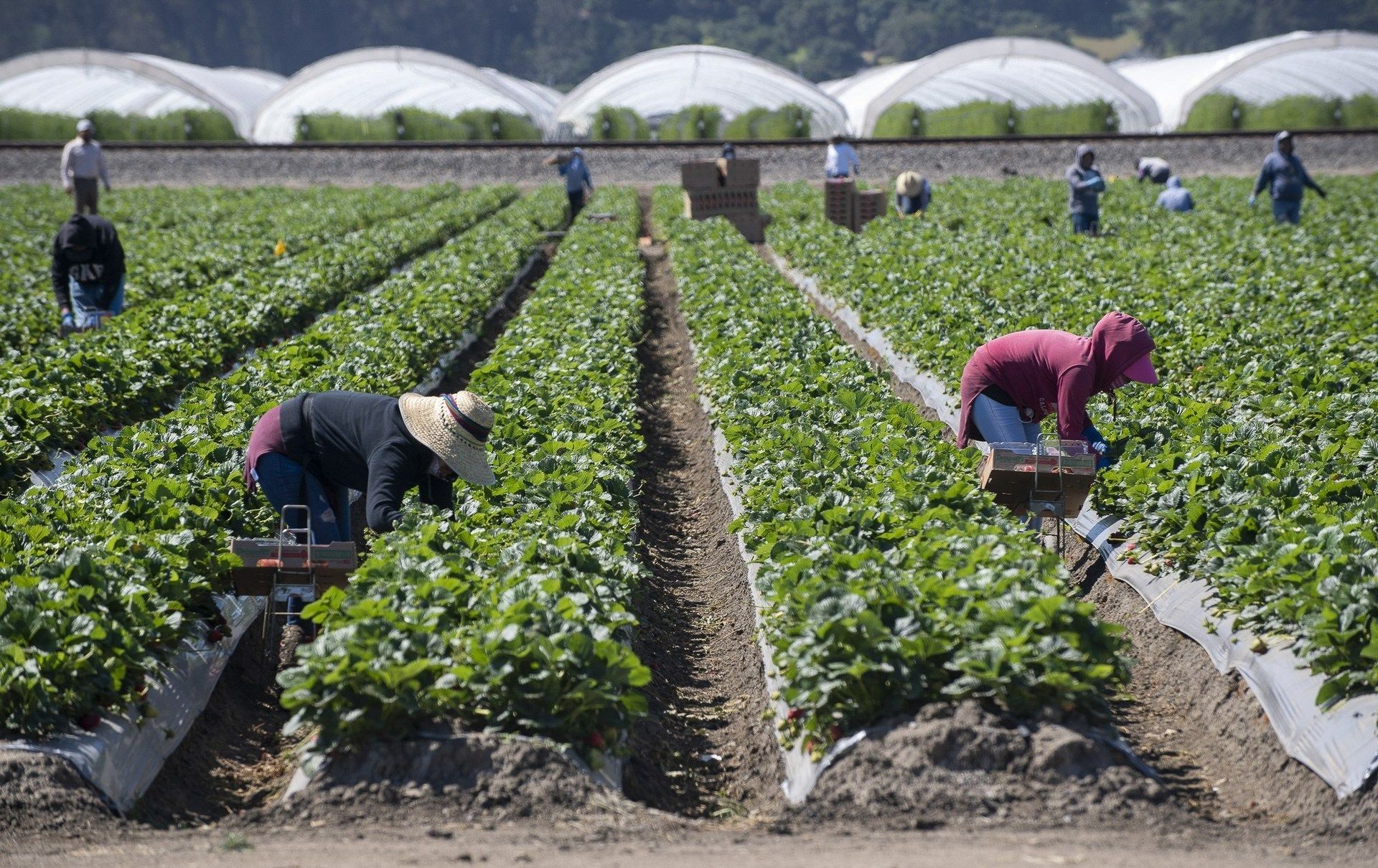 “Extinguishing COVID-19 depends on our ability to keep our essential workers safe,” Newsom said. “This is where we’re seeing the spread.”

With most schools unable to reopen this fall and daily new COVID-19 cases topping 12,000 on two different days this week, Newsom has come under fire for his response to the pandemic, including criticism that he reopened the state too soon. The state’s “watch list” now numbers 36 counties, including California’s most heavily populated regions, with virus activity of concern to public health officials.

(Image: Farmworkers around the Watsonville community pick strawberries as the Watsonville Campesino Appreciation Caravan passes through on Tuesday, May 5, 2020. Today, Gov. Newsom announced a new housing program for farmworkers that will provide hotel rooms for those who need to isolate due to COVID-19. Photo by David Rodriguez, The Salinas Californian)

Newsom highlighted a new program, Housing for the Harvest, which will provide hotel rooms for agricultural workers who test positive or were exposed to the virus so they can safely isolate.

The program, which will rely mostly on Federal Emergency Management FEMA aid, will first focus on the Central Valley, Central Coast and Imperial Valley regions, where many migrant farmworkers live in crowded and unhealthy conditions during the growing season. Counties will be responsible for providing additional assistance to these workers, including meals and check-in visits.

Other efforts announced today include:

California’s migrant farmworkers are at particularly high risk during the pandemic, as many must crowd into cheap motel rooms or other substandard housing during the growing season.

Some counties, including Monterey, have developed pacts for growers to better protect their workers, including mandatory handwashing, added bathrooms and increased distance between workers in the field.

Many agricultural workers have fallen ill despite those measures.

In May, 44 employees of the Calavo Growers packinghouse in Ventura County tested positive. In June, the county saw 188 more farmworkers in Oxnard test positive. The workers — all temporary employees brought to the United States on H-2A visas meant to address local labor shortages — slept five to a room in farmworker housing.

A similar outbreak is occurring in Santa Maria where 57 employees of labor contracting company Alco Harvesting tested positive, according to Jackie Ruiz, a spokesperson for the Santa Barbara County Public Health Department.

At least 112 workers and family members at a pistachio plant in the San Joaquin Valley have fallen ill, representing about a fifth of employees there. Workers allege that their employer, Primex Farms, failed to give them protective gear, told infected workers to keep their diagnosis confidential, and were told to resign if they requested time off to quarantine.

In Napa, at least 30 farmworkers living in farmworker housing centers have tested positive.

“With no visible regulatory enforcement, we are left to hear from workers directly,” Noe Paramo, a rural worker advocate and Joel Diringer, a farmworker health expert, wrote in a recent CalMatters editorial. “We need to protect our food supply and our farmworkers. Relying on California’s $50 billion agricultural industry to implement protections without state oversight, with more than 1 million farmworker families in jeopardy is insufficient. We can and must do better.”