CD of the Week: Haim - Something to Tell You 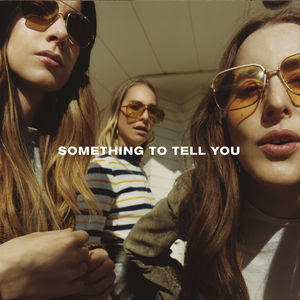 When the time came to record the eleven tracks that make up Something To Tell You, HAIM decided to “go in and record as a band, keeping it a little more organic. That was kind of a mission statement for the album” offered Danielle HAIM. Includes the singles ‘Want You Back’ and ‘Right Now’. HAIM consists of three sisters: Este HAIM (bass), Danielle HAIM (guitars and lead vocals), and Alana HAIM (guitars and keyboards), as well as drummer Dash Hutton. In addition to their primary instruments, each member is also proficient in several others. The group’s pop sound on their studio work stands in contrast to the more rock-based music of their live shows.