What Happens When TikTok Looks To The Avant-Garde For A Challenge?

of living through a degenerative neurological disorder. @kadanharne and @quinfinity/Screenshot by NPR hide caption 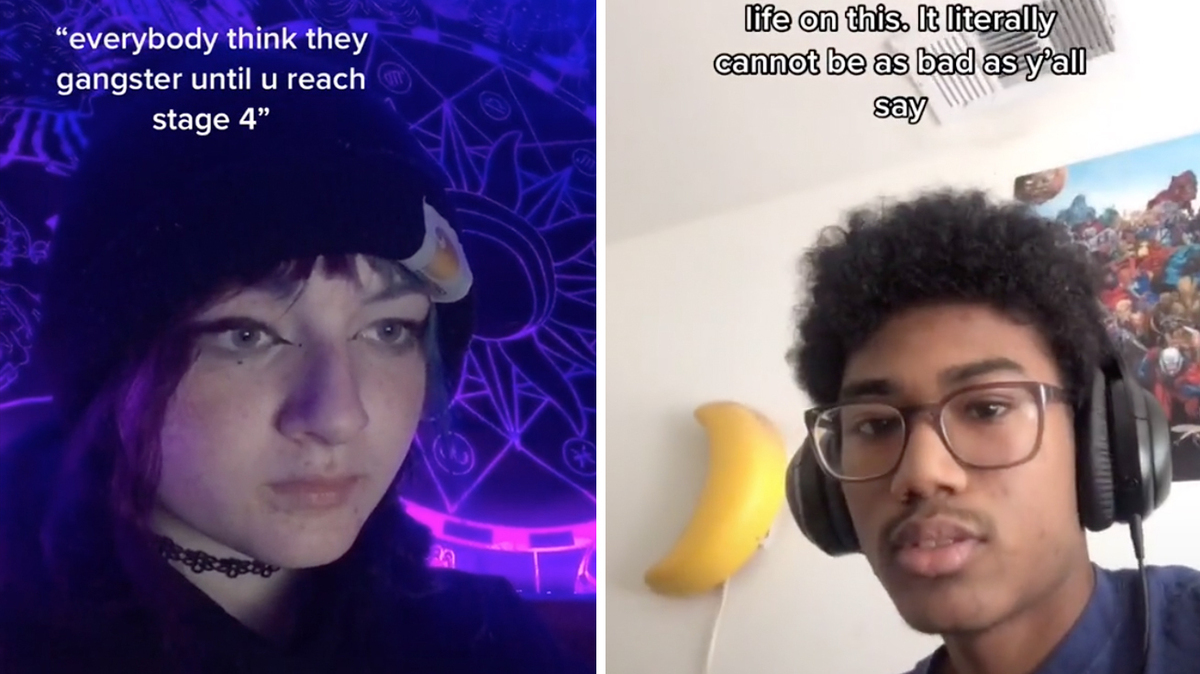 Over the past week, users of TikTok began absorbing, in a "challenge," one artist's musical investigation into the realities of living through a degenerative neurological disorder.

Around the beginning of lockdown this spring, alone in my apartment, I developed a little nightly routine. It involved heavy pours from a jug of Carlo Rossi and repeated spins of The Caretaker's An Empty Bliss Beyond This World, the 2011 breakthrough from a cult favorite English musician otherwise known as Leyland James Kirby. Arranged from edits of Jazz Age ballroom tunes found on forgotten 78s in dollar bins worldwide, the record is as dreamy as it is unsettling; to listen is to be stuck within the locked groove of someone else's distant memories. Kirby re-works these dusty samples to crackle and fade and loop indiscriminately, occasionally repeating themselves or abruptly changing course. Tracks are titled things like "The sublime is disappointingly elusive," or "I feel as if I might be vanishing." It seemed like the right soundtrack for the vertigo of the moment, that feeling of existing in a present outside of time – when I put it on and swayed around my living room, I'd sometimes pretend I had died long ago.

Kirby's been an underground fixture since the mid-'90s, and to call his output prolific is an understatement on the level of referring to the past year as "these uncertain times." There are the early provocations as V/Vm, where he'd mutilate chart-pop and perform in a pig mask; the 20-hour compilations of f****d-up, blown-out rave tunes; the sprawling threnodies for a dying world, released under his own name. But it's his music as The Caretaker that's resonated most. Named for Jack Torrance-by-way-of-Nicholson's slowly unraveling hotel groundskeeper in Stanley Kubrick's The Shining, the project debuted with 1999's Selected Memories From The Haunted Ballroom, glitchy waltzes to echo through an empty Gold Room.

Plenty of Caretaker records followed, but An Empty Bliss was clearly the masterpiece. It was Kirby's attempt at conceptualizing his studies of Alzheimer's disease, including some that suggested playing patients the music of their youth might help lost memories resurface. Perhaps that premise seems loaded beyond the capacities of a 40-some-minute ambient record, and Kirby must have agreed; by 2016, he'd announced that the project of The Caretaker was to slip into dementia itself, as "documented" across a mind-bending six-and-a-half hour project he called Everywhere at the end of time. Over the next three years, Kirby released the work in six installments, each meant to reflect specific stages of Alzheimer's advancement. By the halfway point, upon which we've reached the "post-awareness" stages, the wistful melodies that drifted through the first three sections have been buried in barely penetrable noise, and with last year's release of the final installment, The Caretaker was put to rest for good. 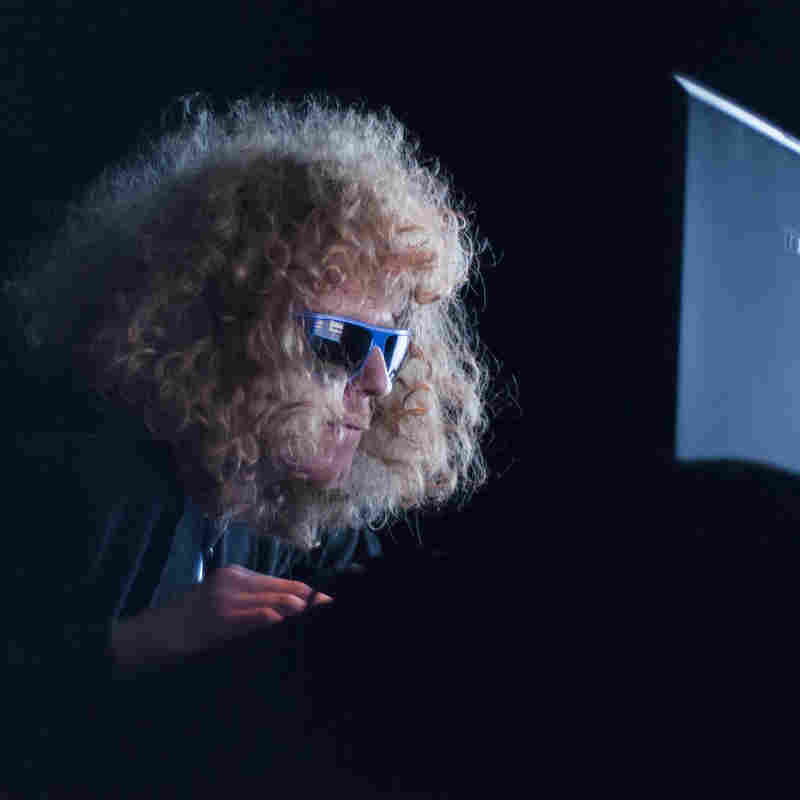 Not exactly the kind of project one expects to inspire the latest viral stunt on TikTok, the video-sharing app and present obsession of Zoomers worldwide. I naturally assumed I was being trolled upon catching word last week of a "Caretaker challenge" that was making the rounds, the kind of joke you can picture an aging Discogs nerd tweeting out for a dozen likes. And yet, in recent weeks, Everywhere at the end of time has indeed been gathering steam on the app, as what appears to be an endurance exercise in terror, with users recording increasingly harrowed reactions to their six-plus-hour listening marathons. "Everybody think they gangster until u reach stage 4," reads the caption on one video, hashtagged #thecaretaker, over a wide-eyed girl's laptop-lit face. And another: "If ion have a mental breakdown by the end of this imma sue all y'all."

@ledzeppelin_ ♬ everywhere at the end of time - sam j

In the purest sense, this is all very funny, the kind of simulation-glitch absurdity that 2020 continues to deliver, and I find it rather heartening that so many people are engaging with the music of The Caretaker (which is pointedly absent from Spotify and its competitors) under any circumstance at all. To enlist hoards of Gen Z'ers to hunker down with six hours of weird ambient music, motives aside, seems like a clear-cut win — the kind of world-expanding encounter with challenging art that feels increasingly hard to stumble upon at random, as what's left of the underground grows ever more precarious.

Though, of course, there is already a minor backlash. Search the hashtag and you'll find allegations that the "Caretaker challenge" can gravely affect one's mental health, that listening to the album could even cause you to experience symptoms of amnesia yourself. "Lots of people on here are really messed up from listening to it," reads one TikTok upload. Others are appended with all-caps trigger warnings. It isn't the first time this music has presented as a creepypasta-style urban legend, either. In a video viewed more than a million times since June, a YouTuber called A Bucket of Jake calls Everywhere "the darkest album I have ever heard," with a thumbnail image that reads, "THIS ALBUM WILL BREAK YOU." Overdramatic but seemingly sincere, these reactions are not so surprising, as far as introductions to experimental music go; I can still remember the day a friend played me a Nurse With Wound record and I imagined myself to be trapped in hell.

Far be it from me, then, to dismiss any earnest response to what is admittedly some heavy s***. (Though for what it's worth, much of Everywhere at the end of time is formally quite lovely.) But I'm not sure it does the project of The Caretaker much justice to present it as a psychology experiment, much less a scary meme. As much as the work is "about" dementia, you might also say it's about the collective amnesia of the 21st century, wherein the internet becomes a proxy for memory, the imperatives of capitalism render days as repeating loops, and the bits of culture we "consume" are so often forgotten. You might even say that, on some level, it's about the increasing unsustainability of life as a working artist. What slips away and what remains, as tech billionaires monopolize the way we hear music? Presented with seemingly limitless options, why does it feel like so little is possible? Could someone like Kirby make something like Everywhere these days, built of lost records sourced from stores now likely shuttered? Is this the future we imagined? What does "the future" even mean anymore?

Mostly, I wish Mark Fisher was here to witness this whole thing. A post-punk philosopher, professor and reliably great writer, Fisher's K-Punk blog was considered hallowed ground in the format's early aughts heyday, back when being a nerd on the internet did not have such diminishing returns as today. For more than a decade, and until his death in 2017, Fisher wrote searchingly about Joy Division, Stanley Kubrick, late-stage capitalism, Burial, depression, Drake. If there was a unifying thread, it was a simultaneous mourning and yearning for, or urging towards, a future that wasn't to come. (Or as one of Kirby's more poetic album titles put it, Sadly, the future is no longer what it was.) His writing articulated a 21st-century sense of inertia, a dull and uncanny sensation he describes in his 2014 book Ghosts Of My Life, where "life continues, but time has somehow stopped."

Fisher often wrote about the music of The Caretaker, too. For the liner notes of Kirby's 2006 album Theoretically Pure Anterograde Amnesia, he wrote: "The theme was once homesickness for the past. Now, it is the impossibility of the present." I'd like to think Fisher would find the Caretaker's sudden trendiness funny, and maybe even fascinating: a bizarro collective grappling with ideas of broken time and lost futures, in a year that has made us question our grasp on reality at just about every turn. And I'd bet that beyond the supposed shock value of the whole thing, he'd no doubt zero in on the empathy built into the exercise of surrendering yourself to someone else's mind, a weird bit of tenderness at the end of the world.