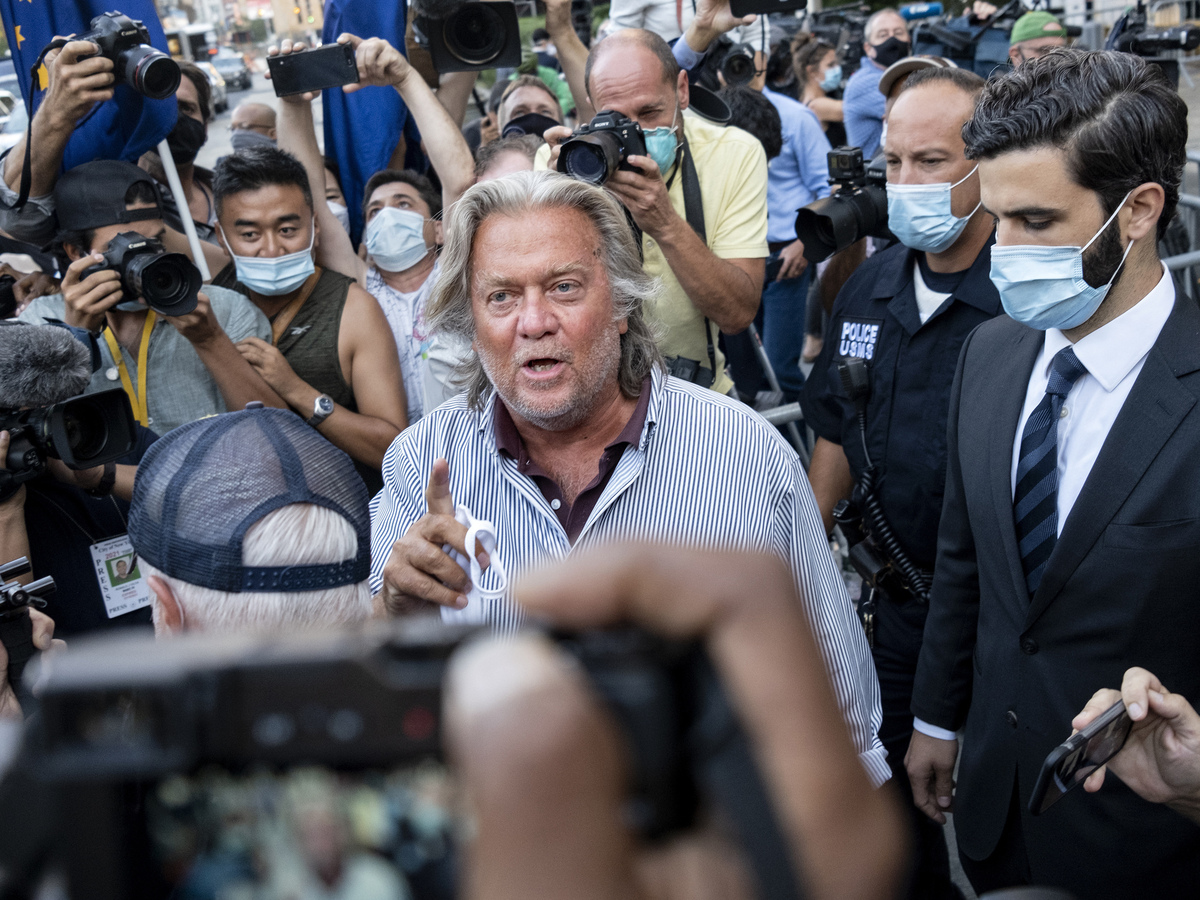 Steve Bannon leaves federal court, Thursday, Aug. 20, 2020, after pleading not guilty to charges that he defrauded donors to an online fundraising scheme to build a southern border wall.

President Trump pardoned his former chief strategist, Steve Bannon, who was indicted for allegedly defrauding hundreds of thousands of people in an online campaign to raise funds for a southern border wall — one of dozens of acts of clemency in the final hours of his administration.

The lengthy list of 73 pardons and 70 commutations landed after midnight. Trump is slated to leave the White House for the last time early Wednesday morning, skipping the inaugural ceremonies of his successor, President-elect Joe Biden.

Other notable names on Trump's clemency list included Rapper Lil Wayne, who received a full pardon after being charged late last year with possession of a firearm and ammunition by a felon. Wayne, whose real name is Dwayne Michael Carter Jr., endorsed Trump ahead of the November election, tweeting a picture of himself with the president.

Just had a great meeting with @realdonaldtrump@potus besides what he’s done so far with criminal reform, the platinum plan is going to give the community real ownership. He listened to what we had to say today and assured he will and can get it done. 🤙🏾 pic.twitter.com/Q9c5k1yMWf

Bill Kapri, the rapper better known as Kodak Black, had his sentence commuted, as did Michael "Harry O" Harris, the co-founder of Death Row Records.

Trump embraced his clemency power early on in his presidency, and has primarily used it to help out prominent supporters. Also on his most recent list: Elliott Broidy, a former fundraiser for the Republican National Committee, and Paul Erickson, another former fundraiser whose Russian girlfriend was working as a foreign agent.

Since he lost the election, Trump has ramped up his use of his pardon authority, granting clemency to nearly 50 people the week before Christmas. Overall, he had issued around 90 pardons and commutations before this latest batch.

Trump Grants Slew Of Pardons, Including To George Papadopoulos And Duncan Hunter

Many of the people granted clemency have been politically connected or convicted of white collar crimes. There were no family members on Trump's new list, but Kenneth Kurson, a friend of his son-in-law Jared Kushner, was given a full pardon for cyberstalking his ex-wife. There were also a few more former Republican lawmakers: Rick Renzi of Arizona, Robin Hayes of North Carolina, and Duke Cunningham of California

Advocates have pressed Trump to offer clemency to people serving years behind bars for low-level drug offenses. While Trump has issued some pardons to people such as Alice Johnson, a Black grandmother who was sentenced to life in prison for a first time drug conviction, he had intervened in such cases much less often.

His last big pardons push included scores of people recommended for clemency by advocates and the Justice Department's Office of the Pardon Attorney.

It's not unusual for presidents to issue a wave of pardons and commutations in their last days in office. Former President Barack Obama granted clemency to 330 prisoners serving time for drug offenses the day before the end of his term. This was a part of Obama's push to address mass incarceration caused by the war on drugs.

One of the most notorious 11th-hour pardon sprees happened under former President Bill Clinton. He pardoned more than 100 people on his last day in office, including his brother, Roger Clinton, and fugitive financier Marc Rich. The pardons sparked outrage and became known as "Pardongate."

Bannon was arrested in August along with three other men on wire fraud and money laundering charges stemming from their work for "We Build The Wall," an online crowdfunding campaign that raised more than $25 million to build a wall along the U.S.-Mexico border.

Prosecutors say Bannon and his fellow defendants, although they'd promised donors that all the funds would go toward the wall, secretly siphoned off hundreds of thousands of dollars and lined their own pockets.

Bannon allegedly received more than $1 million from the organization through a nonprofit he controls, according to the indictment, and at least some of that money was used to cover hundreds of thousands of dollars in personal expenses. All four defendants pleaded not guilty.

Trump and Bannon have had a mutually beneficial relationship that has also at times been rocky.

Bannon was running the far-right news outlet Breitbart when Trump tapped him to lead his campaign in the final months of the 2016 race. After helping Trump pull out his surprise victory, Bannon followed him into the White House as chief strategist.

He helped push some of the most divisive actions in the early days of the Trump administration, including the so-called Muslim ban.

Bannon's major role brought the media spotlight, including a photo on the cover of Time Magazine with the headline: "The Great Manipulator." The cover allegedly rankled the president, who was said to believe he deserved more credit than his adviser.

After a bumpy eight months in the White House that included no shortage of sniping and palace intrigue, Bannon was pushed out of the administration.

He immediately returned to Breitbart, where he continued to push a nationalist, pro-Trump message. But his relationship with the president continued to fray, including over damaging statements attributed to Bannon in tell-all books about the Trump White House.

Yet the two men never totally parted ways. Bannon mounted a vigorous defense of the president during his first impeachment proceedings, launching a podcast and radio show to defend Trump.