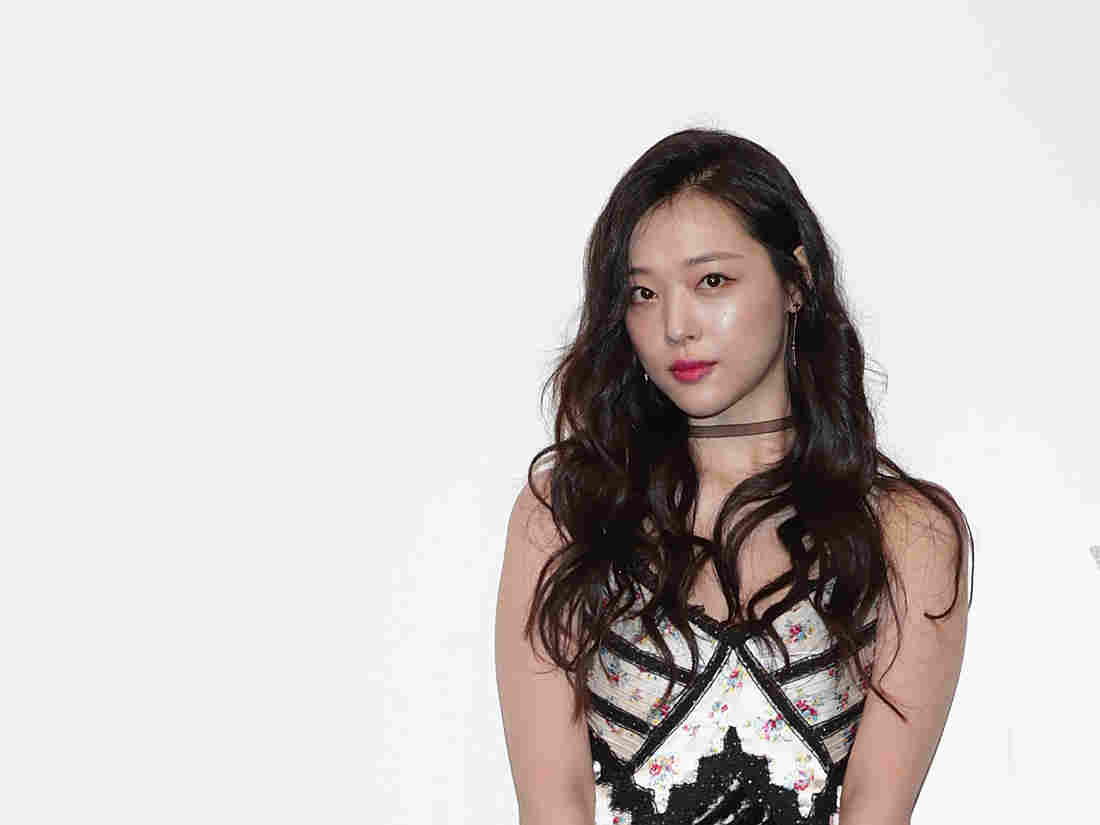 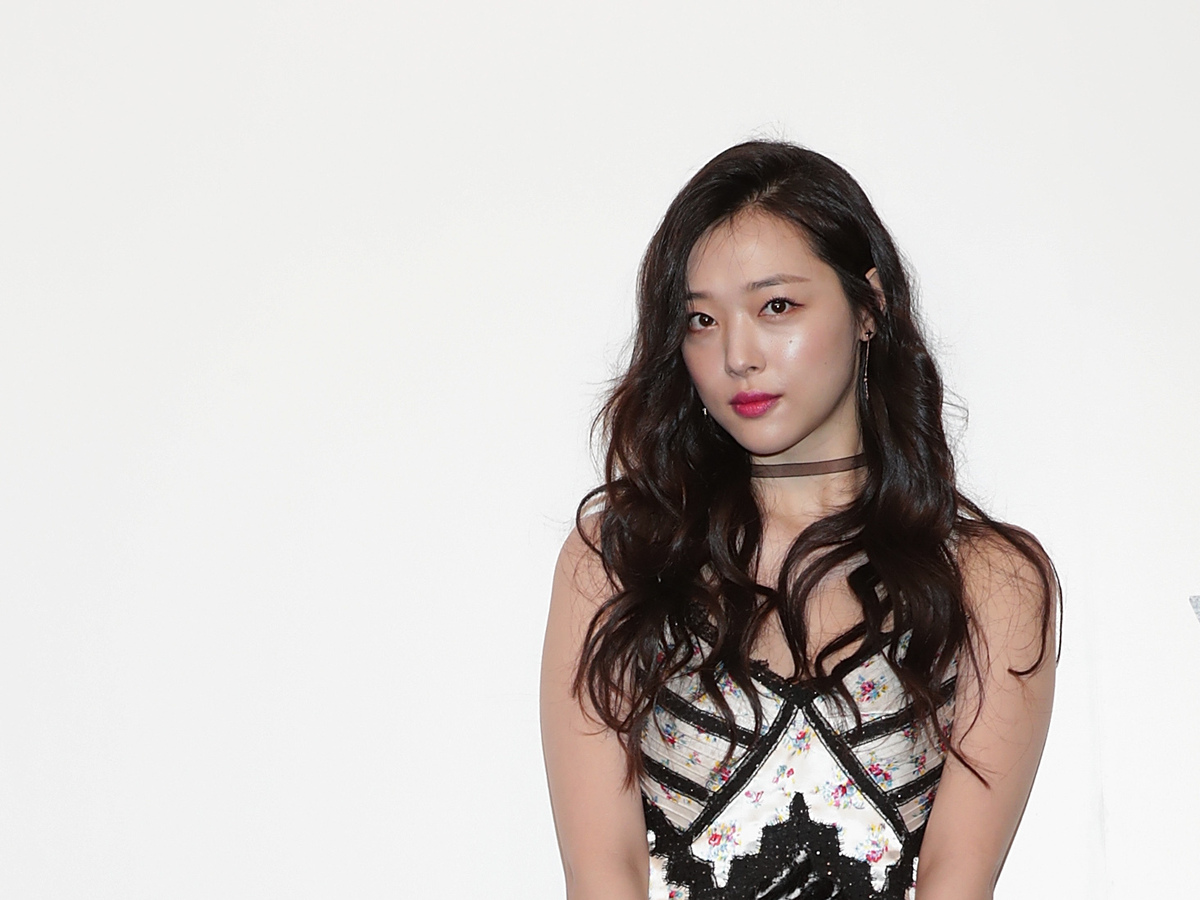 After hearing the tragic news that Sulli, the 25-year-old K-pop singer and actress born Choi Jinri, had died earlier this week, fans and supporters flooded social media with posts celebrating her artistry, praising her outspoken and unapologetic stances on sexuality and feminism, and calling for an end to online harassment and bullying. Sulli, who was just 25, was found in her apartment on Monday. No official cause of death has been released, but that the bulk of the discussion has assumed she took her own life.

Sulli's struggles may never be fully known, but following her death, the conversations on social media amongst her fans and supporters have focused on two things: providing wider access to mental health care and clamping down on online harassment.

Sulli started her career as a child actress back in 2005 and debuted as a member of the K-pop girl group f(x) in 2009. The name of the group comes from the concept of mathematical functions, which can take any number or variable and use a formula to transform it into a new output — the group's five members were known to take any musical genre or topic and make it their own.

In her time in f(x) and after she left in 2015, Sulli embodied this spirit. Whenever she drew backlash, she did not back down — after a relationship with another singer went public and caused a flood of negative, "slut-shaming" comments, Sulli began openly posting about her relationship and normalizing conversations about sexuality. She was also outspoken about the online harassment and bullying she experienced, not shying away from discussing her struggles.

In doing so, Sulli was moving against the current of a Korean society which still maintains a stigma around seeking professional medical help for disorders like depression, anxiety and other disorders. This is a problem all over the world, but is particularly acute in Korea, which had the highest rate of suicide in the OECD as of 2016. Of those, one of the most vulnerable groups are the elderly, who struggle with poverty and lack of a social safety net — and rates for students and young people are above the global average as well. "The cultural belief that suicide is an individual problem makes it difficult to secure funds to expand programs to educate the public about seeking help for mental health problems or to establish training programs for physicians and other relevant service providers," according to the Journal of Korean Medical Science.

But slowly, the conversation in Korea around mental health is opening up — and it has often been, as with Sulli, stars in the K-pop industry leading the charge. Some have come forward to discuss their own struggles, to urge others to seek help, and to describe depression for what it is: a condition that may require medical treatment.

In an exchange with fans earlier this year, singer Taeyeon of Girls' Generation publicly discussed her experiences, making a point of correcting fans' misperceptions. "I am suffering from depression. I am working hard to get better through treatment with antidepressants," she responded, via Instagram Stories. "Whether it's depression or bipolar disorder, please don't 'tsk' and treat people disrespectfully. They are all patients who are suffering." Research shows that celebrities opening up about their struggles with mental illness like this may decrease stigma among fans and followers.

In the aftermath of Sulli's death, Korean celebrities have spoken out about the pressures they face being under constant watch; some have been screenshotting and calling out negative comments left on posts memorializing Sulli. On Tuesday, Shinhwa member Kim Dongwan pointed out the hypocrisy of the standards that celebrities are held to. "Celebrities must smile even when they don't eat or sleep well," he wrote. "They must be sexy but never have sex. They must be tough but never get into fights."

Women in the K-pop industry are particularly scrutinized, and harassed accordingly online — whether for reading a book that allegedly promotes feminism, for wearing clothes that are too scandalous on stage, or even just sporting a phone case that reads, "Girls can do anything." These types of "scandals" have been exacerbated as Korea experiences both a growing feminist movement and a backlash against it. Sulli was one of the most outspoken female celebrities on women's issues — after Korea's Supreme Court ruled that abortion should be legalized, she posted a message of support, for example, drawing the ire of many online commentators.

Earlier this year, Sulli tackled this online harassment head-on, appearing on a TV show in which celebrities review and discuss hateful comments they've received online. Sulli addressed some of the things she's been criticized for, telling people to use their energy for something more productive, rather than criticizing people just for being different.

To that end, concerned citizens have started calling for a more robust verification processes online in order to cut down on digital bullies who hide behind anonymity. Korea does have strict defamation laws that have been used to punish people who leave malicious comments or spread rumors about celebrities online. (Korea has implemented ID verification in the past, but it was rolled back after the Korean Supreme Court ruled that the laws violated free speech rights.)

The Korea Entertainment Management Association (CEMA) has already released a statement vowing stronger action on behalf of entertainers: "Regarding cyber terrorism, we will not stop because of apologies or expressions of reflection. Instead, we will root out malicious commenters, and we will make requests and petitions to investigative bodies and to the government so that the commenters can be strictly punished."

In an official petition posted to the Presidential Office's website, a concerned citizen asked for a new "Choi Jinri Law" in Sulli's honor. The petition proposes ID verification requirements for online comments as well as punishments for journalists who invade celebrities' privacy or publish malicious rumors. "Before celebrities, they are people," the petition reads. As of Wednesday morning, more than 11,000 people have signed the petition so far. Members of Korea's National Assembly have already started working on a bill to tackle malicious comments online, working with the support of dozens of organizations and celebrities, many of whom have themselves experienced harassment from netizens.

This is the lesson fans hope to convey as they continue to grieve the loss of a unique star — it is online harassment should be stigmatized, not struggles with mental health. Supporters are hoping these conversations will lead to concrete, systemic action towards providing broader access to mental healthcare, as well tackle the pervasive negativity that too often fills online spaces.