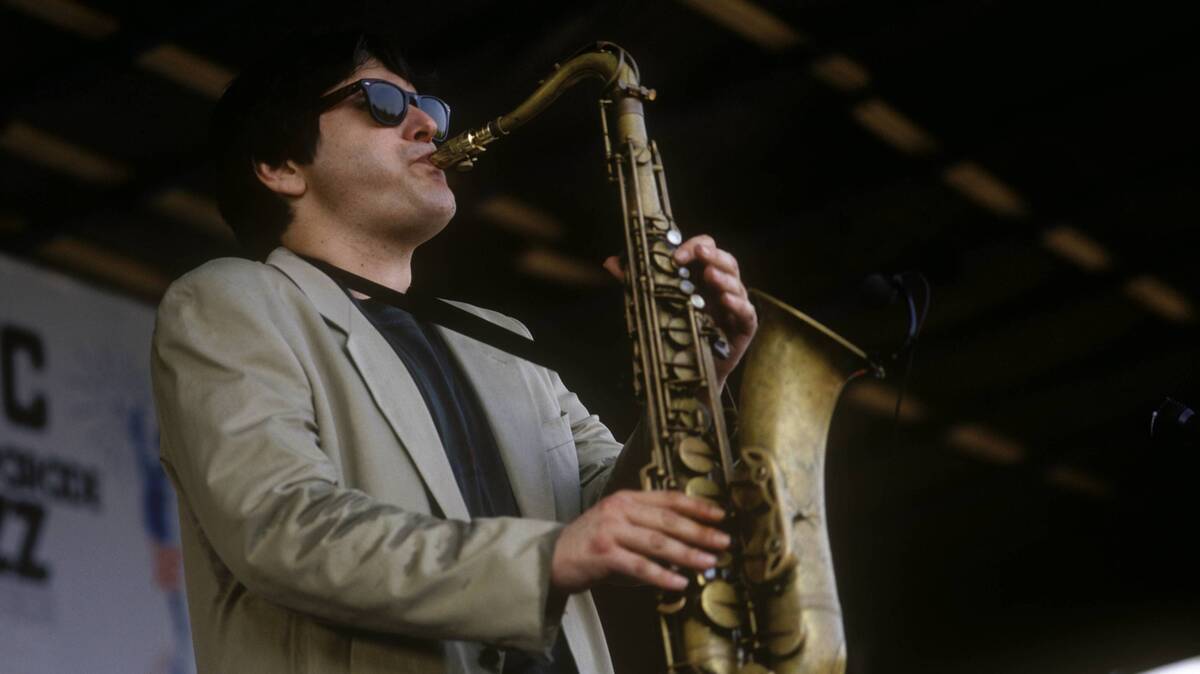 Steve Grossman, photographed while performing on July 1, 1991 in Nice, France.

Steve Grossman, a saxophonist whose lunging projection, sure rhythmic footing and clarity of attack helped propel him into the spotlight in the 1970s, notably in bands led by Miles Davis and Elvin Jones, died on Aug. 13 at Glen Cove Hospital in Glen Cove, N.Y. He was 69. The cause was cardiac arrest after a long illness, his brother Myles Grossman confirmed to NPR.

A brilliant exponent of John Coltrane's powerful saxophone language, and a key figure in what would come to be known as the post-Coltrane school, Grossman had a frame of reference broader than that reputation would suggest.

He was deeply influenced not only by Coltrane but also by another modern titan of the tenor saxophone, Sonny Rollins, and by the bebop-rooted, free-thinking alto saxophonist Jackie McLean. In his later years, Grossman could also evoke swing-era tenors like Don Byas – not in emulation, but rather a show of brusque, seen-it-all respect.

For the first phase of his career, though, Grossman was defined by dauntless precocity. He was only 18 when he joined Davis' band, which was alchemizing a ruggedly intrepid new strain of jazz-funk. As a saxophonist, he was stepping into a role previously defined by Wayne Shorter, and to say that he was tossed into the deep end would probably be an understatement.

One of his first recorded credits tells the tale: it's from a four-night engagement at the Fillmore East in 1970, which yielded the double LP Miles Davis at Fillmore, and was later issued in full as a boxed set. For a taste of how much fire Grossman added to the furnace, consult his soprano saxophone improvisation on a version of "It's About That Time," from Night 2. (It begins at the six-minute mark, after a pugnacious Davis solo that feels like a gantlet thrown.)

Grossman's stature as a prime Coltrane inheritor was ratified by his next posting — with Jones, who had been Coltrane's ingenious drummer, a tireless vortex of polyrhythm. During his roughly five-year tenure with Jones, Grossman made his name as a tenor player, especially on the 1973 album Live at the Lighthouse, a touchstone that features him alongside a jousting peer, Dave Liebman, with only Jones and bassist Gene Perla in the rhythm section.

Perla, who had been responsible for assembling this edition of Jones' band, soon formed a separate trio with Grossman and percussionist Don Alias. They called it Stone Alliance, and released a series of albums that further burnished Grossman's reputation. "When Steve would play, the time just got that much more locked-in," Perla tells NPR Music. "It became clearer."

Steven Mark Grossman was born in Brooklyn on Jan. 18, 1951. His mother, Rosalind, was an amateur pianist who fostered a musical household. His father, Irving, worked as a salesman for RCA, before becoming president of the audio company KLH Research and Development Corporation.

Steve, who picked up the alto saxophone in third grade, was one of three brothers. Hal, three years his senior, was a trumpeter who served as a musical mentor, urging him to study the style of saxophonist and bebop paragon Charlie Parker. During the early 1960s, while the Grossman family was based in the Pittsburgh area, Hal and Steve formed the front line of a band they called The Uniques, patterned after the Cannonball Adderley Quintet.

After the Grossmans moved to Long Island in the mid-'60s, Steve began circulating at low-rent clubs like Slugs' Saloon, and artist lofts like the one run by Perla, half a block from the East River. It was at Perla's loft that the personnel of Stone Alliance first coalesced, sometimes with his roommate at the time, Jan Hammer, in the mix on keyboards. When Grossman made his first album, Some Shapes to Come, in 1974, he enlisted Hammer, Perla and Alias as his band.

Grossman went on to release more than two dozen albums as a leader, usually with first-rate accompanists. A 1985 album called Love Is the Thing put him out front with the impeccable Cedar Walton Trio; in 1991 he released one album with bebop piano guru Barry Harris and another with Coltrane's modal genius McCoy Tyner. (Both of those featured drummer Art Taylor, a regular associate in that era.)

After relocating to Bologna, Italy, where he lived for many years, Grossman lost some traction in the jazz firmament, though his reputation among saxophonists remained ironclad. When he played a homecoming gig at the Jazz Standard in 2009, it had been more than a decade since he'd played in a New York club. He filled his first set with a mix of Coltrane-ish originals and jazz standards, working with a swinging hometown rhythm team.

Grossman, who moved back to the New York area roughly five years ago, never reaped the benefits of a proper comeback: no big run of bookings, no new studio album. But his debut was reissued (with a new title, The Bible), and his work with Davis and Jones has continued to earn awestruck new fans.

"He was the best of all of us," Liebman once said in an interview, referring to a post-Coltrane cohort that included Michael Brecker and Bob Mintzer. "We, the tenor players of that time from our generation, all acknowledged that. Those of us still alive from then would still say that Steve was the one that had the most going on."