Showdown, The Caribbean Answer To Verzuz, Is Part Of A Long-Running Musical Exchange 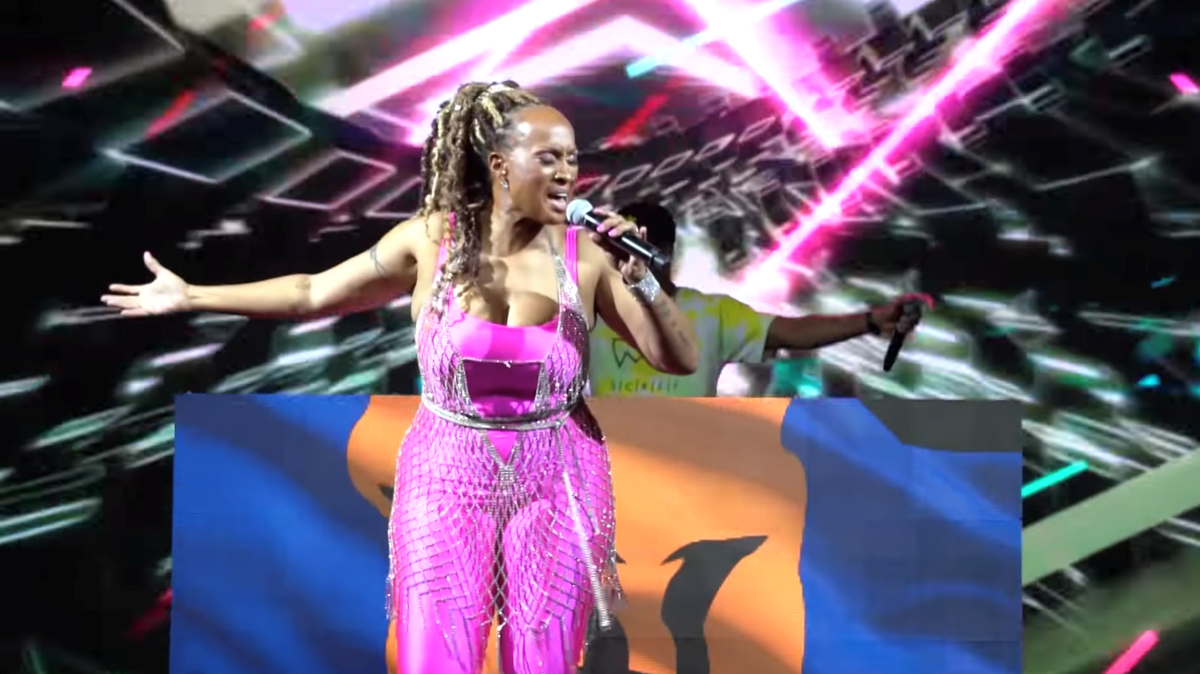 In the early days of the pandemic, hip-hop producers Swizz Beats and Timbaland created a music industry monster: Verzuz, a live-on-Instagram music battle show that broke livestreaming records on social media. Now, the Caribbean has responded with its own version. The emergence of Showdown (or, officially, Digicel Showdown, after the telecom company that sponsors the series) feels only natural — one more handoff a long-running cultural exchange between Caribbean music and African American traditions.

Showdown debuted last October with artists Alison Hinds from Barbados and Patrice Roberts from Trinidad. Andrew Bailey of Perception Management, which co-produced the series, says that rather than begin with a dancehall pairing— which Verzuz had already done with a performance by Jamaica's Beenie Man and Bounty Killer — the team elected to showcase soca music, the fast-paced child of Trinidadian calypso and the soundtrack of Caribbean carnival.

"The reason we went with soca artists was because it was a genre that hasn't been represented in Verzuz. Dancehall had been represented, so we wanted to do something for the culture," Bailey says.

Hinds says that representing soca inShowdown was an honor. "It gave me the opportunity to appreciate the other performer's music," she says, "and to give a little history lesson about some of the fan favorite songs that have become classics."

Speaking of history, you could argue that even though Verzuz came first, the series actually owes its existence to Caribbean music.

The story goes back to Jamaica in the late 1950s, when the streets of Kingston hosted rabid competitions between DJ crews or "sound systems," blasting imported jazz and blues on colossal speakers stacked high. "Selectors," who chose the sound system's music and chatted raucously over it, started getting more famous than the tunes they played. That's how dancehall stars were born, with the rise of artists like Yellowman and Tenor Saw in the '80s, or Mavado and Vybz Kartel in the early 2000s.

These DJs, as they were known, staged lyrical battles onstage and in the studio, says Sonjah Stanley Niaah, a professor at the University of West Indies in Jamaica. "Bounty Killer, Beenie Man, Vybz Kartel and Mavado: We have had legendary clashes, so much so that authorities have had to be called into suppressing clashes — prime ministers calling DJs to sit in particular sessions to ease the tension, school students taking sides. So the clash is an animated, exaggerated component of Jamaican life," she says.

The clash also helped birth hip-hop, when Jamaican-born DJs like Kool Herc moved to the US and set up sound systems there — and shaped American rapping.

It all adds up to a kind of cultural pingpong game between the West Indies and the U.S. Showdown is born from Verzuz, which is in turn born from Jamaican dancehall, which is born from American jazz and blues. This back-and-forth is a continuous event with historical roots.

"It goes all the way back to the movement of enslaved persons and later freed persons between Cuba, Jamaica [and] the American South — what becomes jazz, what then gets played on radio, what gets listened to by Jamaicans," Niaah says. "So to really say that hip-hop comes out of Jamaica is to also acknowledge the ways in which Jamaicans were listening to what was being played in the United States. That musical cross fertilization has to be acknowledged."

And it's not just Jamaican music. Hinds points out that Trinidadian calypso — which shaped Jamaican music in the pre-reggae days — is grounded in clash culture, too. "There's a style within calypso called picong where calypso artists will verbally freestyle battle, and that can get pretty intense," she says.

So when Verzuz made the cover of Billboard magazine, and Jamaica's Beenie Man and Bounty Killer were left out of the photo, plenty of their fans felt slighted. But to those in the know, it's just another chapter in an ongoing musical story.