On 'Expectations,' Katie Pruitt Bares Her Identity To Fans — And Her Own Family 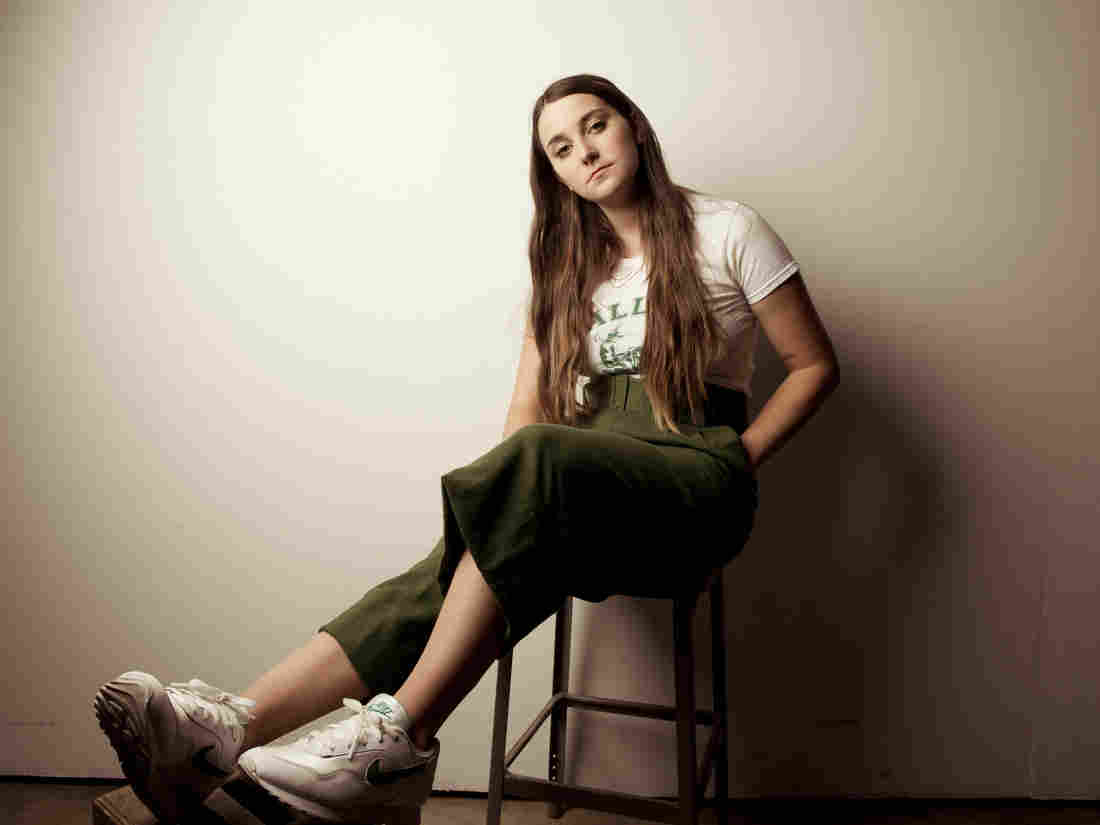 "This story isn't unique to us. There's a lot of parents and kids going through this same thing," Katie Pruitt

says of confronting her sexuality and her mother on her debut album, Expectations. Alysse Gafkjen/Courtesy of the artist hide caption 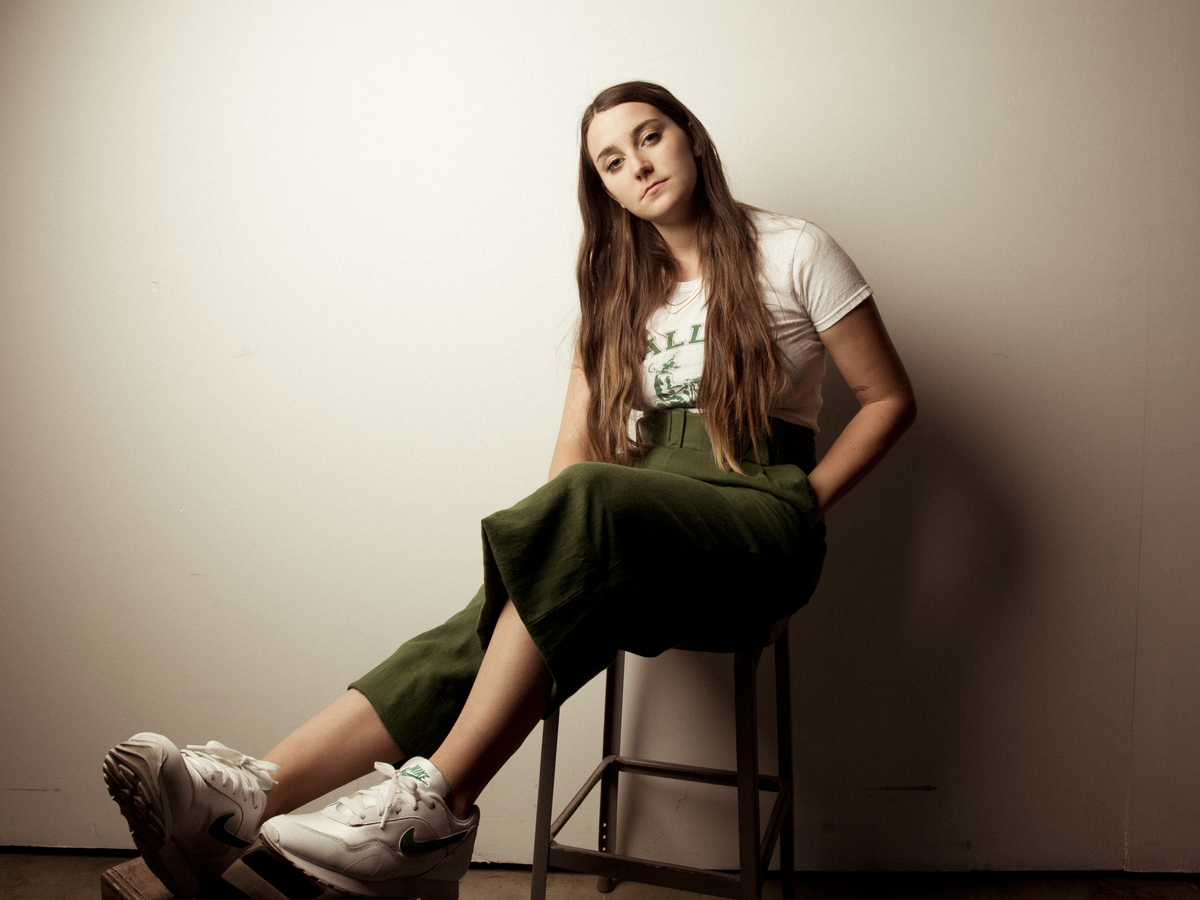 "This story isn't unique to us. There's a lot of parents and kids going through this same thing," Katie Pruitt says of confronting her sexuality and her mother on her debut album, Expectations.

Alysse Gafkjen/Courtesy of the artist

In making her first album, Expectations, Katie Pruitt wanted to accomplish the same thing that most singer-songwriters want to with their debuts: to convince a new audience of her sharpness as a writer and charisma as a performer.

Beyond that, the 25-year-old newcomer had a more personalized goal: She was bent on telling the story of how she confronted the social and religious codes that once made her feel condemned. Pruitt's done that with such clarity of expression and disarming intimacy — Expectations is aesthetically warmhearted even in its tensest moments of confrontation — that she's given her own family a greater understanding of her experience.

Growing up in an Atlanta suburb with parents who worked white-collar jobs in engineering and sales, Pruitt formed an early impression of the sort of conventional and upright life she should aspire to. Her parents took her and her brother to mass and Catholic school where, she says, "We went to confession once a week, where I was in second grade and they're like, 'Confess your sins.' "

At such moments, she found herself at a loss for an appropriate response: " 'I didn't share with my brother? Like, I don't know what I did wrong this week.' So that was pretty intense in my formative years, learning what good and bad is."

Over the years, Pruitt picked up on "the way that adults in my life talked about being gay," as though it was included in their definition of bad. Her impression was that "there just weren't really many examples of being a gay woman in the South."

Music became Pruitt's focus in middle school. She took on roles in musical theatre productions, and her mom, Jennifer Pruitt, taught her basic chords and simple hymns on acoustic guitar. From there, Katie moved on to Green Day and Blink-182 covers that appealed to her taste as an avid skateboarder. During high school, she picked out more melodically complex tunes on guitar, including a few by John Mayer, and became a singer-songwriter in her own right.

"My friends — when we would get together and drink after school, I would have a guitar in my hand and I would play them new songs," she says. "It was just sort of like a way for me to connect with my friends and communicate."

Jennifer Pruitt remembers encouraging her daughter to venture out to open mic nights to gain experience delivering her own songs in front of an audience of strangers. "She just kept writing songs and getting better and better and better," Jennifer Pruitt marvels. "I mean, there wasn't a song that I didn't like, even in high school."

Like countless teenage bedroom poets before her, Katie Pruitt treated songwriting an outlet for self-expression, but there were details that she consciously withheld from her lyrics.

"I definitely remember having crushes on girls in high school and writing the song to a girl, or about a girl," she begins. "But then when I played it for people, I obviously wasn't out, so I would just change the pronoun and kind of hide behind that — just 'cause I wanted people to hear the song more than I cared at the time about being out. But it still did feel a little bit inauthentic, because I'm like, 'I wonder if they knew what it was actually about, if I would feel better understood.' "

It was when Pruitt crossed state lines to complete college in Nashville, Tenn. — putting a light but safe distance between herself, her hometown and people there who'd already cemented their images of her — that she felt the freedom to flesh out and present a more complete version of who she was. She joined a college band that played parties, weddings and local bars; she also took classes in commercial songwriting and won awards for her compositions.

But as far as she was concerned, Pruitt's real breakthrough came when she worked out how to place her closely guarded emotions front and center in a song called "Loving Her." The tune is gracefully resolute, beginning with the lines "If loving her's a sin, I don't want to go to Heaven / No, there's nothing else up there I could need" and sung to a melody that moves in elegantly reiterating circles.

"The first time I played 'Loving Her' in front of an audience, I was like, what if this is too specific? Like, am I being too outright about this?" Pruitt reflects. "But the response that I would get from people was either, 'Oh my God, me too. I feel that way, too.' Or, 'I have a friend that feels that way.' So I just got a lot of positive reactions to writing that way."

She reached a pivotal conclusion about her songwriting approach: "Okay, I don't need to hide behind this veil. I can just say exactly what's on my mind."

Pruitt mostly played solo shows around town until she found musicians she trusted to mirror the delicately dramatic undulations of feeling in her songs. Word of the incandescent performances that showcased her vocal agility made its way to industry veteran Gary Paczosa and the rest of the leadership at Rounder Records, which signed her last year.

Paczosa, who has his own home studio, has shepherded many a first-timer through the album-making process, a common scenario in a city where professional reputations count for a lot and polish is expected. In this case, he served as engineer and let Pruitt and Michael Robinson, a friend who'd recorded her for a college project, produce their own sessions in Paczosa's cozy space, despite their lack of production credits.

"I think we all felt it from the beginning, the conviction that she has for what she wants to say in a song," Paczosa says by way of explanation. "And that's what drove the entire process."

Still, as much as Pruitt wanted to make a compelling musical first impression with her billowing, reverb-bathed, pop-honed, folk-rock set, that wasn't her sole focus. She gave a lot of thought to how sharing her confessional tunes, particularly a lilting piano ballad titled "Georgia," might affect her relationship with her parents.

The song relives her youthful fear that she had no place in the ideal life they envisioned. She read the lyrics aloud to her mother, with a disclaimer of sorts: "It's not going to hurt me to sing it unless it hurts you." Then she sent Jennifer Pruitt the recording and waited; the response came while Katie was hiking in Idaho, out of cell range.

"I left her a message and just told her it was a beautiful song," Jennifer Pruitt explains. "And that she doesn't need my permission to put it on her record. That's her prerogative. It really was very touching, very moving."

At the same time, she says, "It was very difficult to hear. You know, it's difficult to hear at all, when you're a parent, that your child that you love has gone through some pain and that you might have been the cause of some of that."

Jennifer Pruitt gained insight not only from her daughter's songs and their sometimes wrenching conversations, but by reading books and seeking out a faith-based support group.

Both Katie Pruitt's album and the way she talks about it are colored by the specifics of her still-unfolding story. But she's the kind of singer-songwriter who strives for broad reach, whose melodies, story lines and dynamics alike arch toward revelatory moments that she can imagine many others sharing.

"This story isn't unique to us," she says. "There's a lot of parents and kids going through this same thing."