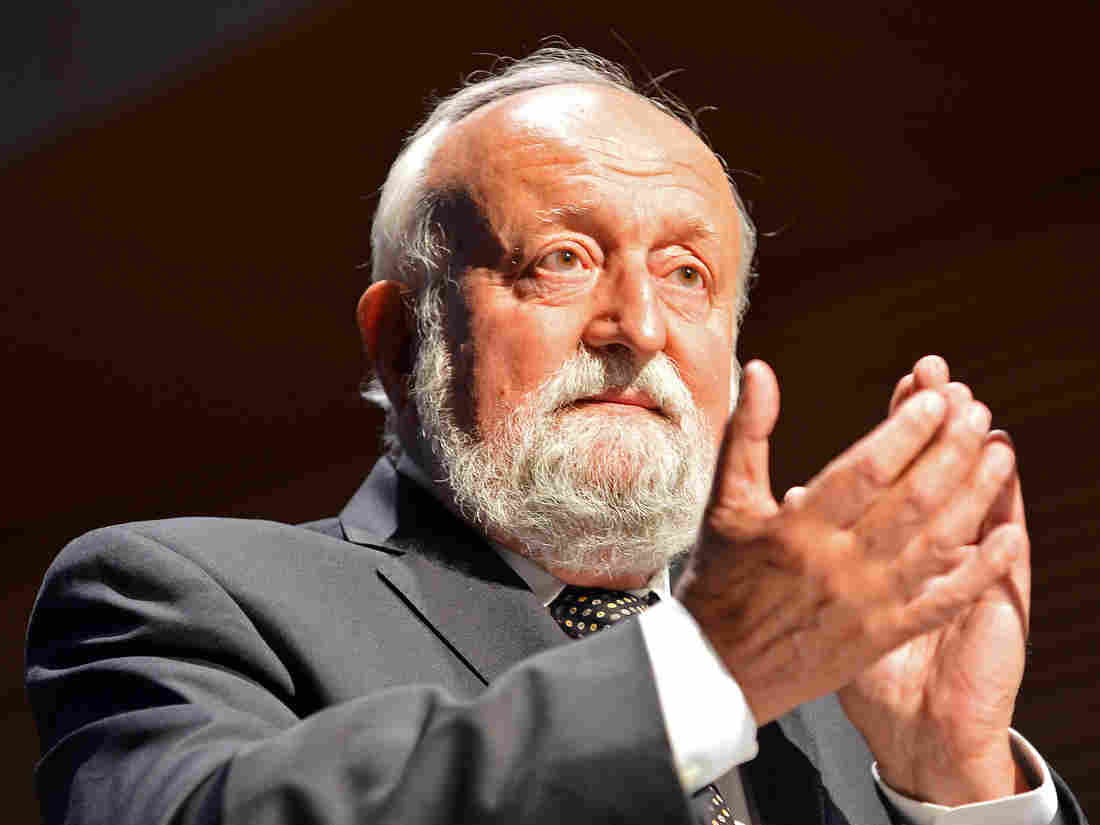 Polish composer Krzysztof Penderecki, at the opening of a music center named after him in southeastern Poland in 2013. 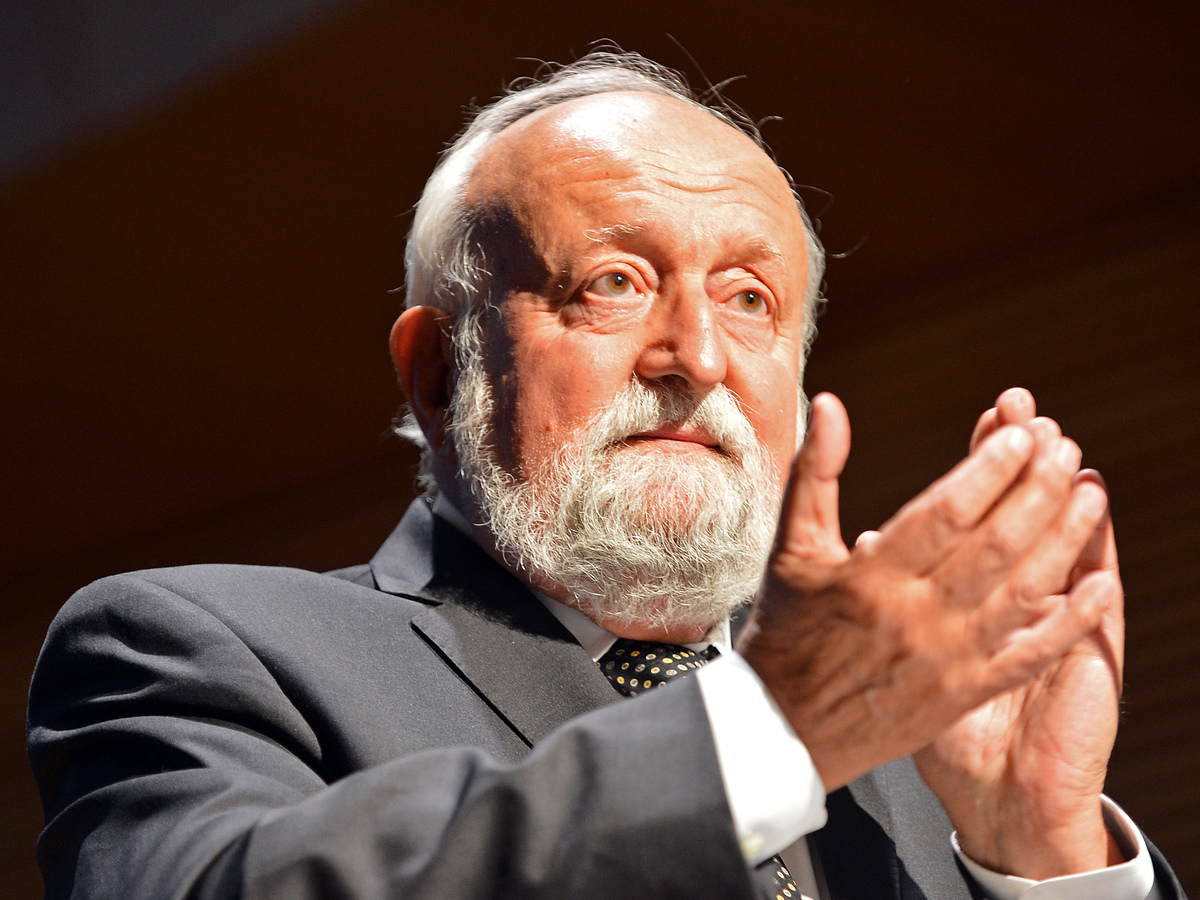 Polish composer Krzysztof Penderecki, at the opening of a music center named after him in southeastern Poland in 2013.

Krzysztof Penderecki, one of the world's leading composers, died Sunday at the age of 86. The Polish Ministry of Affairs announced his passing in a tweet. No cause of death was given.

The Polish-born composer established himself while still in his 20s with jarring atonal works such as Threnody to the Victims of Hiroshima, and came to be widely admired by music fans and musicians far outside traditional classical music circles.

Radiohead guitarist Jonny Greenwood noted the passing of one of his idols on Twitter, "Penderecki was the greatest - a fiercely creative composer, and a gentle, warm-hearted man" he wrote Sunday. "My condolences to his family, and to Poland on this huge loss to the musical world."

The Sound of Struggle Tempered With Terror: Penderecki At 80

Untold numbers of people are familiar with Penderecki's music – perhaps without knowing it – thanks to films such as Shutter Island and especially The Shining, the Stanley Kubrick thriller that included the compositions Polymorphia and The Awakening of Jacob to frightening effect.

While Penderecki found instant fame with Threnody to the Victims of Hiroshima, an avant-garde piece for 52 strings from 1960, he later broadened his compositional style to embrace tonality. In works like the Second Symphony ("Christmas Symphony") and the violin concerto called Metamorphosen, he displayed a singular post-romantic palette of orchestral colors.

The concerto was written for violinist Anne-Sophie Mutter, who premiered a number of the composer's works. Mutter, writing on Facebook Sunday, lamented the loss of a friend and a composer whose music was more than just a vehicle for world premieres.

"The loss of Krzysztof Penderecki leaves a huge void in my heart as well as an enormous one for all musicians and music lovers around the globe," she wrote. "The premiere of his "Recordare" in September 1984 in Stuttgart was a life changing experience for me. His violin concert "Metamorphosis" became my life line during the terminal illness and death of my husband in 1995."

Greenwood, who released an album in 2012 that paired his own Penderecki-influenced compositions with those of the Polish composer, told NPR last year that he first encountered Penderecki's music in college. "I saw him doing these very peculiar sounds, and it was all notated on paper. And yet an orchestra turned it into a strange, otherworldly collection of textures. And I loved it. And then when I saw it live, I really loved it. It was 100 times better than the recordings, and I've been obsessed ever since." Greenwood acknowledges that some of his orchestral music, especially his celebrated score for the film There Will Be Blood, was inspired by Penderecki.

He said that to be properly appreciated, Penderecki's music must be heard live to catch all of the subtlety. "When you listen to those recordings of Penderecki you just associate it with horror films and you think it's loud and abrasive and grating," Greenwood said. "But in the room it's actually very colorful and quiet and it's a magical experience."

Penderecki was born Nov. 23, 1933, in Dębica, some 200 miles south of Warsaw. He studied composition in Kraków, where his earliest works won awards from the Union of Polish composers. By the time he was in his late 20s, Penderecki was already recognized as one of the rising champions of avant-garde music. Threnody was given a UNESCO award, while later works, such as the St. Luke Passion won Westphalia and Italia prizes and the Fourth Symphony earned Penderecki the Grawemeyer Award.

The composer launched his career as a conductor in 1972 when he led the London Symphony Orchestra (at Abbey Road studios) and the Polish National Symphony Orchestra in celebrated EMI recordings of seven of his most popular early pieces, including Fonogrammi, Anaklasis and De Natura Sonoris No. 1. His role as a teacher broadened over the years as he accepted guest residencies in Germany in the 1960s and at Yale University in the '70s.

In his music, Penderecki has confronted politics, religion, social injustice and the plight of the common man. In 1980, the year that the trade union Solidarity was formed, Penderecki composed a Lacrimosa for the unveiling of a memorial in Gdańsk, erected to commemorate those killed in the 1970 shipyard riots, when Poland was under Soviet rule. The piece for soprano, orchestra and chorus later became part of another major work, the Polish Requiem, which contained music in tribute to Cardinal Wyszyński and Father Kolbe (who gave his life for another in Auschwitz).

With his early, avant-garde pieces Penderecki told interviewer Bruce Duffie in 2000 that he wasn't writing for an audience, but that he later changed his mind. Music, the composer said, "it's just communication with people, because that's the only way I can communicate easily. This is my profession. But those pieces in the '60s were played and I found an audience, and I found that people were interested in this music. So I think it's very important writing music which somebody understands."

Along with his wife of more than five decades, Elzbieta, Penderecki is survived by a son and two daughters.