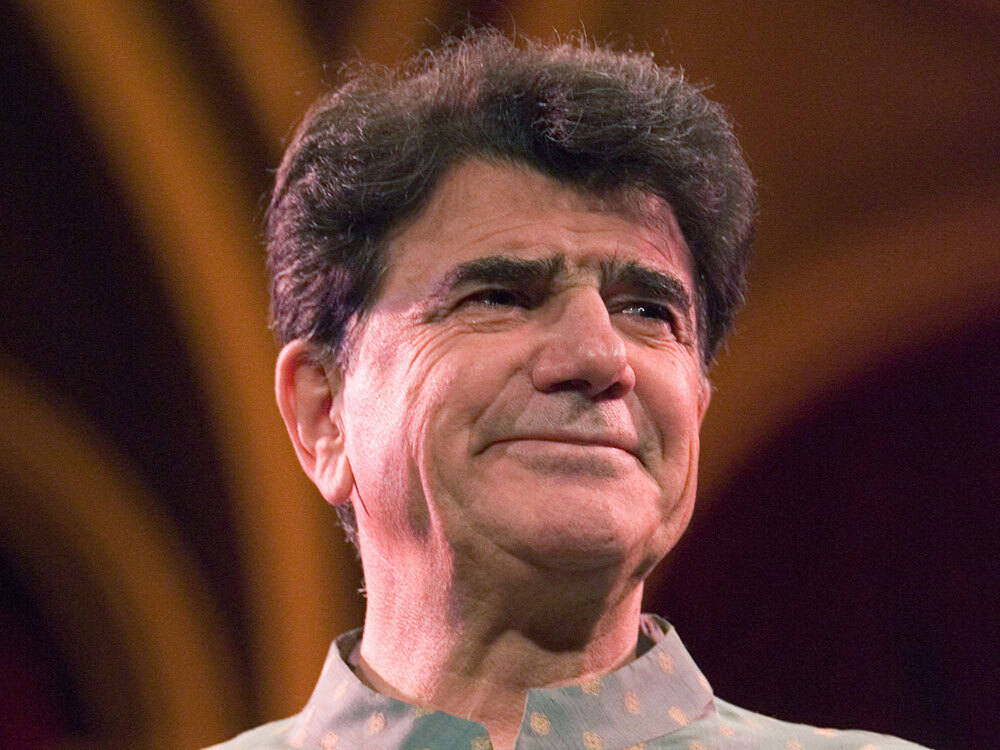 An Iranian singer whose voice was regarded as one of his country's national treasures — and who then ran afoul of the regime — has died. Mohammad Reza Shajarian, a master performer who was hailed as one of NPR's 50 Great Voices of all time, was 80 years old. He earned the title of ostad — master — and was beloved for his commanding voice that could cry with haunting pain and soar with deep soul.

He had kidney cancer for many years and had been hospitalized in Tehran. Several government-controlled Iranian media outlets announced his death on Thursday; one of his closest collaborators, the Iranian kamancheh player and composer Kayhan Kalhor, also confirmed his death to NPR.

Shajarian's son and protege, the singer and tonbak drum player Homayoun Shajarian, wrote on Twitter Thursday afternoon in Farsi: "The soil of the feet of the Iranian people flew to meet the beloved." He also posted an empty black square on Instagram.

Shajarian was born in 1940 in the Iranian city of Mashhad, in the country's northeastern province of Khorasan. Beginning at age five, he learned Qur'anic recitation from his father.

As he told NPR's Morning Edition in 2010, his father was very conservative and religious — and considered any music that wasn't Qur'anic recitation haram, or forbidden. But his uncle was a music lover, and encouraged him to explore Persian classical and folk music.

By age 12, he was learning the rigorously structured repertoire of Persian classical music and its ancient songs. His professional career began in 1959 at Radio Khorasan; he went on to sing for Iranian state radio and television, and to teach at Tehran University. His repertoire encompassed love songs and the mystical works of such great medieval Persian poets as Rumi and Hafez as well as overtly political songs and more contemporary lyricists.

The chaos of the Iranian Revolution transformed Shajarian's path, as it did for so many others in his country. In September 1978, after the Shah declared martial law across Iran, governmental forces fired on a large protest in Tehran's Jaleh Square; at least 100 people died.

In the aftermath of that day, which became known as Black Friday, a group of Iran's leading classical musicians, including Shajarian, wrote a protest letter to the government, cutting their ties to state radio. As scholar Nahid Siamdoust writes in her 2017 book Soundtrack of the Revolution: The Politics of Music in Iran, the letter was submitted in Shajarian's handwriting. His willingness to address what he perceived as injustice, in the letter or — either openly or through carefully constructed allegories — in his songs, eventually dictated the course of his life.

In the same revolutionary period, Shajarian was one of the founding members of an influential group called the Chavosh Culture and Arts Society, a group of classical musicians who soon began writing revolutionary and protest songs; one that Shajarian became particularly associated with was called "Tofangam-ra bedeh": "Give Me My Gun."

Decades later, the singer told Siamdoust that he didn't consider himself a political person, except "in defense of humane ideals and the homeland." Even so, once Ayatollah Khomeini and his regime came into power, Shajarian's songs were co-opted by the state media — and he chose to withdraw from the public eye for three years following the revolution.

In 1985, after Shajarian's re-emergence, his album Bidaad caused a stir. In post-revolution Iran, even the title carried multiple layers of meaning. Bidaad is a melody within the core Persian classical repertoire; in Farsi, the Persian language, the word itself also means "injustice." But the separate words bi and daad also mean "without voice."

The song's searching, melancholy lyrics were taken from the 14th-century poet and Sufi mystic Hafez, but also seemed to address the plights of Iranians in the new Islamic Republic. "This home was the land of companions and the kindhearted," he sang. "When did kindness end? What happened to the land of companions?"

Shajarian's subversive choices were subtle enough to pass through the hands of Iran's cultural censors. Many of his other popular songs, like "Morgh-e Sahar" ("Bird of Dawn"), also bore veiled lyrics, but ones that his fans could easily understand.

Later in his career, however, Shajarian became more transparent in his criticisms — and in Iran, he paid a price. During the country's Green Movement in 2009, he publicly requested that state media stop playing the songs that he had recorded in the revolution's earliest period, saying that the government and its then-president Mahmoud Ahmadinejad had cynically co-opted them.

In June of that year, he told BBC Persian: "Every time I hear my own voice on this media, my body shakes and I feel ashamed ... These songs that I sang in 1979 and 1980 were for the uprising that the people made, it was for that movement, but now I see they [the government] are making a mockery of these songs in my face and others like me, and the face of the people for whom I sing."

The government's reaction was swift. In state-controlled media outlets and those closely aligned with the regime, Shajarian was accused of being a traitor, a sell-out and a pawn of Western forces. The voice that had been everywhere in Iranwas suddenly swept from public view.

The ban even included a sublime recording of the Rabbana — a prayer sung during the Muslim holy month of Ramadan to break devotees' fasts each evening — that harkened back to his childhood roots as a Qur'anic reciter.

Since 1979, Shajarian's Rabbana recording had been broadcast daily on state television and radio. But after his 2009 remarks, it was promptly removed. ("Ramadan without Rabbana is like Christmas without Christmas carol," one fan in Tehran told the Guardian in 2013.) He was no longer permitted to perform or record in Iran. When he performed a Tiny Desk concert in the spring of 2013, he was still very much privately grappling with the effects of the regime's censure.

Despite official castigation, however, Shajarian stayed primarily in Iran. But he toured and recorded abroad for enthusiastic fans, both those of Iranian heritage and people who were simply captivated by the sweeping power of his voice.

Two of the recordings he released in the United States as a member of the group Masters of Persian Music were nominated for Grammy awards: 2002's Without You and 2005's Faryad. They also included two other virtuosos, the tar player Hossein Alizadeh and Kayhan Kalhor playing kamancheh, as well as his son Homayoun.

In 2016, he released a video in which he disclosed that he had been battling kidney cancer, wryly referring to the disease as a "friend" with whom he had already been living for 15 years.

In February, as word spread in Tehran that Shajarian was at the city's Jam Hospital for treatment, a large crowd gathered in the street outside to pay homage to him. Despite the ban against the singer, the crowd sang "Morghe-e sahar" in his honor: "Oh God, oh universe, oh nature, make our dark evening into dawn."

Iran authorities banned maestro #Shajarian inside the country since 2009 when he supported #IranProtests; & after 11y of official ban on him, ppl gather in front of the hospital in Tehran where he's receiving trtment & sang out one of his most famous songs pic.twitter.com/X78T477d8t