for Best Children's Album. The duo won the honor in 2013 for their album Can You Canoe? and have amassed five total nominations. Frederick M. Brown/Getty Images hide caption 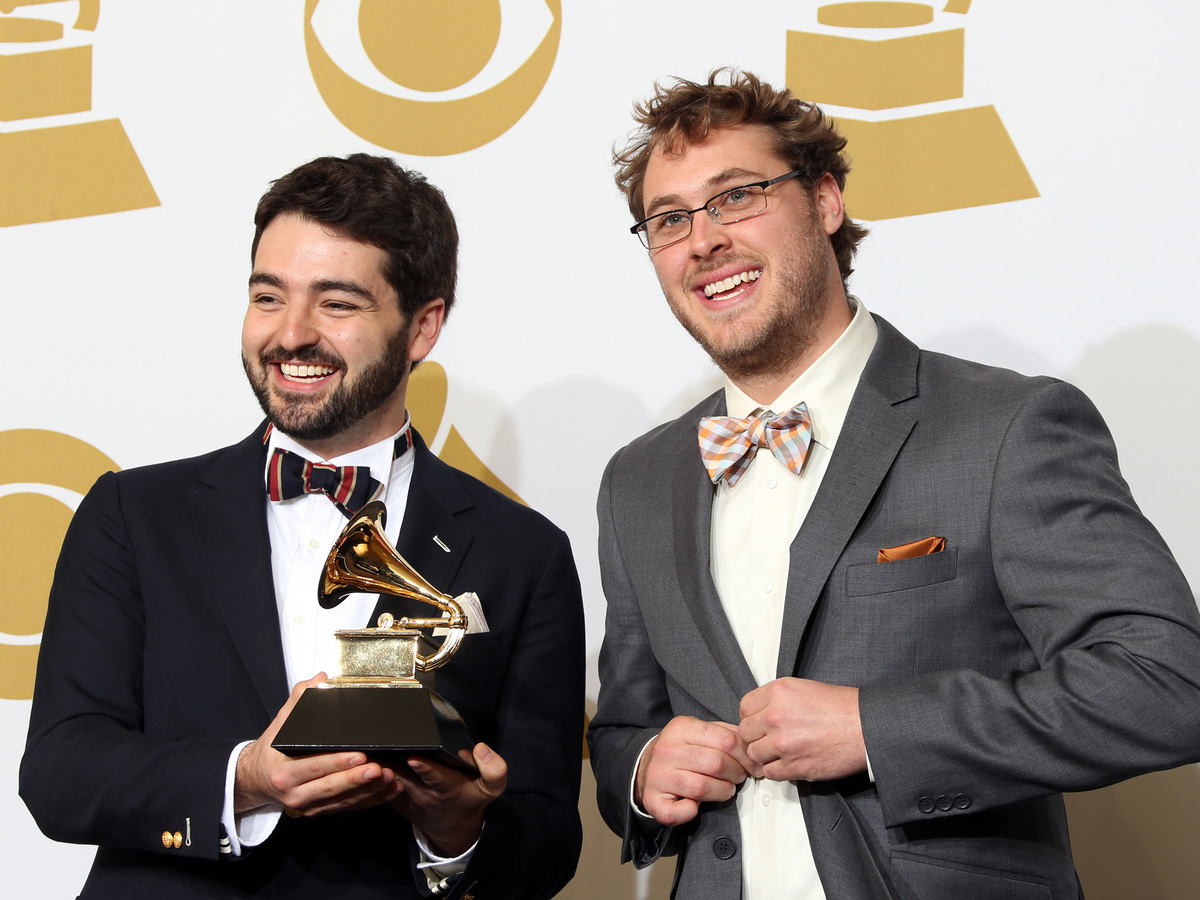 Justin Lansing (left) and Joe Mailander (right) of The Okee Dokee Brothers have declined their 2021 Grammy Award nomination for Best Children's Album. The duo won the honor in 2013 for their album Can You Canoe? and have amassed five total nominations.

Three of the five acts nominated for the 2021 Best Children's Album Grammy Award are saying "no thanks." They're upset that the contenders in their category are all white.

One of them is Alastair Moock, whose nominated album, Be A Pain, is about American heroes who stood up for their principles: Dr. Martin Luther King, Jr., Harvey Milk, Rosa Parks, the Parkland shooting student protestors and others.

Upon hearing the news that he was nominated along with three other white male acts and one white woman, Moock smacked his head. "After this year, to have an all-white slate of nominees seemed really tone deaf," he says.

The Boston-based singer-songwriter says he'd love to get a Grammy, "but I don't want it like this, where the playing field's not even."

Moock is protesting by turning down his nomination. So are fellow acts Dog on Fleas and the Okee Dokee Brothers.

"We thought that it was the strongest thing we could do, to stand with people of color whose albums are too often left out of the Grammy nominations," says Joe Mailander, one of the Okee Dokee Brothers. He hopes to expand notions of what children's music is. "This is not just white guys with guitars playing for kids. We want to welcome all different types of music to this community."

The Okee Dokee Brothers, Moock and Dog on Fleas — all "white guys with guitars" — sent a letter to the Recording Academy asking that their names be removed from the final Grammy ballots. They wrote they "couldn't in good conscience benefit from a process that has historically overlooked women and artists of color."

The other Okee Dokee Brother, Justin Lansing, said they felt a special responsibility to ask for change in a genre "tasked with modeling fairness and kindness to kids and families."

Butterfield Jones says since she started her job in May, she's been looking for ways to increase diversity among the Academy's membership and in the Grammy's secret nominating committees. The Academy recently partnered with the racial justice group Color of Change to begin holding itself and record labels more accountable. They're pushing for more transparency at the Academy and support for artists, especially those who are Black.

"We have made a very clear and firm commitment to diversity, equity and inclusion as a part of our core values," Butterfield Jones says. "I think many of the actions that we've taken and have put into place are signs of that. But we still have a lot of work left to do."

Family Music Forward, a collective whose mission is to amplify Black voices in children's music, was also invited to the Recording Academy meetings last month.

"We had the floor, and we had the opportunity to voice our concerns. They definitely responded with a sense of urgency," says Aaron Nigel Smith, a founding member of Family Music Forward.

The collective formed in early 2020, inspired by the Black Lives Matter movement. Smith says the Academy seemed open to recommendations such as restructuring the nominating committees.

"We left it in a very hopeful tone that we can keep a discussion going and work together to increase membership with people of color in the academy," Smith says. He hopes the Academy can add more people "voting for projects that don't necessarily sound like the mainstream, that might sound like [they've] got an African vibe or reggae vibe or a hip hop vibe."

All of the musicians interviewed for this story agreed that Pierce Freelon should have been nominated this year for his critically-acclaimed album D.A.D., which has elements of hip hop, jazz, electronic and Afro Caribbean rhythms.

Freelon appreciated the stance the Grammy nominees took to support diverse artists. "I just couldn't think of another example in my memory of white men specifically revoking their privilege in this way," he says.

He points to other non-white artists who should be on the Grammy's radar: Saul Paul, a rapper from Texas; Uno, Dos, Tres Andres, a bilingual singer born in Colombia; and the R&B Soul band Shine and the Moonbeams. He also thought about the 96-year-old folk singer Ella Jenkins.

"She's probably the most prolific and foundational person in children's music. And she's a Black woman. But guess what? She's never won a Grammy Award through the Recording Academy process," Freelon says. "They had to give her an honorary lifetime achievement award, but she actually never got that recognition from her peers in the industry."

One of the two Grammy nominees who decided to remain on the ballot is Joanie Leeds. Her ninth children's folk music album is titled For All The Ladies.

"I didn't decline because my album is really about empowering young women. I mean, I have 20 women on my album. So for us, it was like it was kind of counter to to our empowering women message to step down," Leeds says. "I know that this is really about the guys that dropped out, but I feel like a lot of times women are kind of left on the side. It's a shame. I wish there was more equality with women."

The other nominees and Family Music Forward say they support Leeds's decision. Next year, they expect to see more women and people of color up for Grammy Awards.