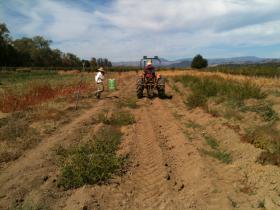 But, after years of neglect, the heirloom spud nearly died out before being rescued by food historians. Today, the Bodega red is once again a thriving commercial success. A survey of farmers suggested that around 30,000 pounds of Bodega reds were grown for consumption this year.

Emmett Hopkins, farmer at Foggy River Farm, began growing the tuber last season to support Sonoma County's Slow Food movement but the potato did so well he chose to quadruple production this year.

Find the Bodega Red potato, or other rare foods, near you through LocalHarvest.org.