Exclusive: Kaiser Cited for Failing to Treat COVID-19 as Airborne 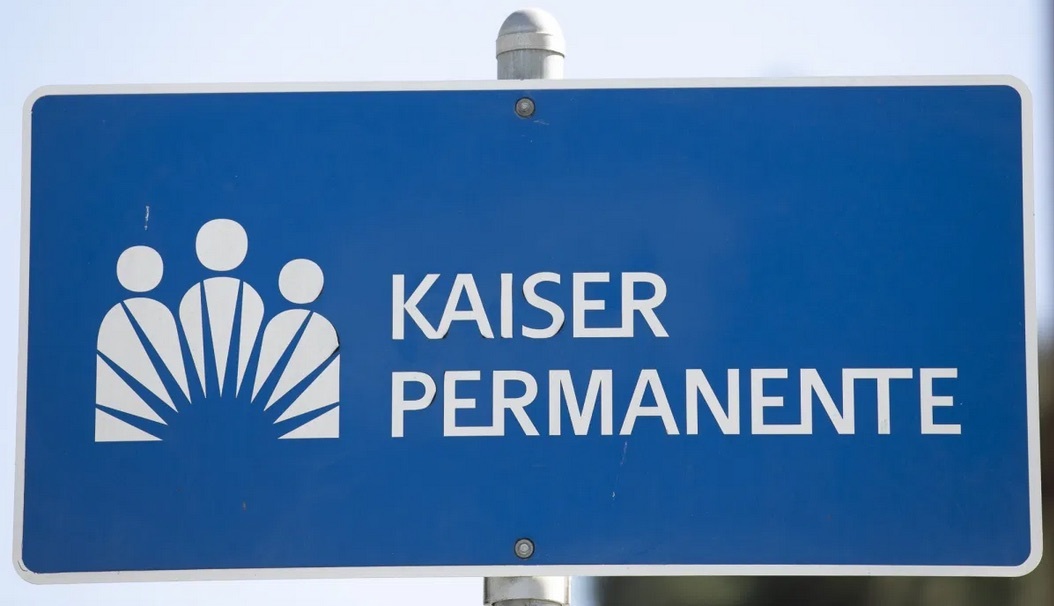 California workplace safety officials issued a serious citation against a Kaiser Permanente psychiatric facility in Santa Clara, accusing the center of failing to provide workers with N95 masks and other protection against COVID-19. But the problems facing the health care giant may run much deeper.

(Image: Kaiser Permanente has been fined by the state for failing to treat COVID as airborne. Photo by Anne Wernikoff for CalMatters.)

The citation, issued Wednesday by the state’s Division of Occupational Safety and Health with a proposed fine of $11,200, is the first in an expected wave of citations against Kaiser Permanente facilities statewide for failing to acknowledge that COVID-19 can be transmitted via aerosol particles, according to a source inside Cal/OSHA, who asked not to be identified. Kaiser told CalMatters on Thursday that it plans to appeal.

The agency found that Kaiser systematically failed to comply with California health and safety standards for aerosol transmissible diseases (ATD), the source said, even after early studies showed that the virus could survive in the air. California instructed employers in May to assume that was the case, and most California hospitals complied. After a series of evolving statements, the Centers for Disease Control and Prevention updated its guidelines last week to say that COVID-19 transmission can be, in fact, airborne.

Cal/OSHA’s citation thrusts the health care giant into the heart of a national battle over how hospitals and other health care employers should keep workers safe not only from virus particles that can hurl through the air in droplets from a sneeze or cough but also hover in the air after being exhaled by those infected. The nurses union welcomed California’s enforcement action to protect frontline health workers.

“Cal/OSHA is operating at full enforcement authority and that makes our workplaces safer,” said Stephanie Roberson, government relations director with the California Nurses Association. While she hasn’t seen the citation, the union filed a complaint about the Santa Clara facility.

Until this week, Cal/OSHA had closed 80 complaints about COVID-19 hazards in Kaiser Permanente hospitals and medical centers without issuing any citations. Many alleged that health care workers were never provided with N95 masks and other personal protective equipment. CalMatters obtained and reviewed the citation against the Santa Clara facility, which identified five violations of the state’s rules on aerosol transmissible diseases, including failing to provide an adequate supply of N95 masks, allowing symptomatic and asymptomatic employees to work alongside other employees and failing to quickly notify employees of exposure.

A Kaiser Permanente spokesperson said the company disagrees with the state’s citation. Headquartered in Oakland, Kaiser is among the largest managed health care systems in the nation. The chain has received 28 citations across the state over the past five years, several of which it appealed.

In response to questions about the health system’s COVID-19 precautions, Dr. Paul Thottingal, a national infectious disease leader at Kaiser Permanente, said that the health system does follow CDC’s droplet precautions guidelines and the state’s ATD standard when performing an aerosol-generating procedure. For example staff must wear N95 respirators and face shields when performing lung examinations, nebulizer treatments and intubation. He added that staff members working with suspected or confirmed COVID-19 patients also wear the proper gear and treat them in isolated areas.

“This approach is in line with CDC guidance, recommendations by the World Health Organization, and Cal/OSHA, and is consistent with the practices of other health care providers in California and around the country,” Thottingal said.

The ATD standards, however, require that employers provide powered air-purifying respirators with HEPA filters, not N95 masks, to employees performing an aerosol-generating procedure.

Under the standards, employees working in the same area as suspected or confirmed COVID-19 cases must have well-fitting N95 masks. Additionally, the employer must reserve isolation rooms for patients with the virus, provide employees with training about aerosol transmission and notify employees of potential unprotected exposures.

Earlier this month, the CDC recognized the airborne spread of the virus on its website, after taking it down just weeks before, adding to public confusion. Airborne transmission happens when small respiratory particles remain suspended in the air over long distances and time.

But even when the science behind the way the coronavirus spreads was murky, California treated it as airborne, said Kevin Riley, director of research and evaluation at UCLA’s Labor Occupational Safety and Health Program.

That got “effectively drowned out by the CDC and local health departments” de-emphasizing the risk of aerosol transmission, said Riley, who has trained nurses across the state on the ATD standards during the pandemic.

Cal/OSHA issued clear guidance in May that COVID-19 is an airborne infectious disease that triggered additional precautions in health settings, including nursing homes, hospices, clinics and other medical facilities.

But acquiring N95 respirators has been an ongoing challenge during the pandemic. Until recently, hospitals have said the supply chain continued to be spotty, and that it’s been difficult to acquire fitted respirators especially for smaller faces.

The national shortage of medical supplies in the early months also drove the state to make questionable transactions. In one notable example, the state wired half a billion dollars for masks to a three-day-old company, only to then pull back after bankers raised concerns.

“If we had an infinite amount of PPE, there would be no argument about this,” said Sen. Richard Pan, a Sacramento Democrat and pediatrician who chairs the Senate Health Committee. “But unfortunately, we didn’t at the time, and even now, we have more, but not a huge amount.”

Gov. Gavin Newsom recently signed one of Pan’s bills requiring the state and health facilities to maintain a stockpile of protective gear, including respirators for a future pandemic or public health crisis.

On April 4, Cal/OSHA received a coronavirus-related complaint about the Santa Clara psych facility, federal records show. During an April 17 inspection, the agency found that the psychiatric facility had failed to implement a plan to protect its mental health workers from the threat of coronavirus hanging in the air, didn’t provide an adequate supply of N95 masks, allowed “symptomatic and asymptomatic employees to work” alongside other employees, and failed to quickly notify employees of exposure.

The psychiatric facility racked up $2,200 in additional fines for failing to ensure that N95 respirators fit properly, train worker-to-worker exposure, or notify employees of the time and date they were exposed to a positive case at work.

The penalties are relatively small compared to Cal/OSHA’s other COVID-19 citations. Some add up to around $200,000 for a single employer. Already, over a third of the employers slapped for COVID-19 hazards have appealed.

The largest penalties levied against a health care provider to date is a $57,120 fine on CHA Hollywood Presbyterian Medical Center, a large privately owned general acute hospital in Los Angeles, including for its policy of reusing dirty N95s after treating COVID-19 patients and failing to promptly notify the county health department or other employees of their exposure after an employee died from the disease onsite.

A pattern of complaints

The state worker protection agency has taken an education-over-enforcement approach to COVID-19 complaints during the pandemic. While it has published dozens of industry-specific guidelines and held extensive training, Cal/OSHA has limited its policing of health and safety laws.

Federal records show that Cal/OSHA received a deluge of complaints against Kaiser facilities across the state during the pandemic’s early months. Between March 16 and April 20, the agency received at least eight complaints about the Kaiser Foundation Hospital in Fresno. 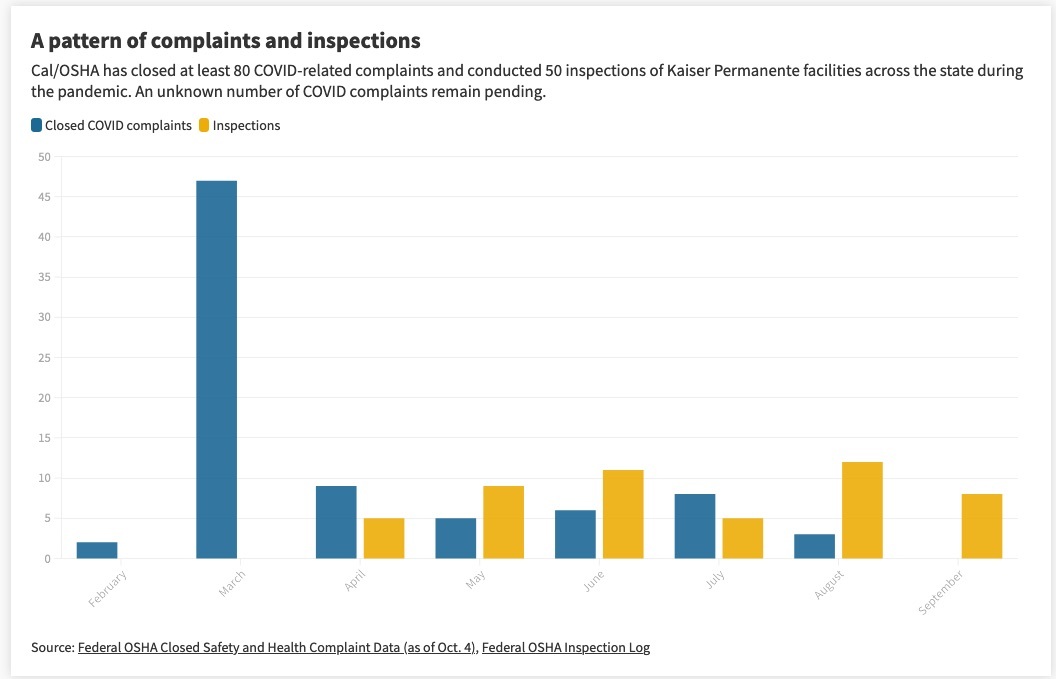 As the pandemic has worn on, the agency ramped up site visits, conducting 50 inspections of Kaiser facilities since early April — compared to a total of 10 in 2019. The state has inspected the Fresno hospital twice during the pandemic, but no citations have been issued.

In a legislative hearing on worker safety last week, Kaiser Fresno ICU nurse Amy Arlund extended blame to the agency. The first worker to die at her hospital in May was a nurse who had filed a complaint with Cal/OSHA in April about workplace hazards and exposures, she said.

“The idea that it’s going to take six months to draw a conclusion in a health care facility the size of mine only means that patients are going to be at risk,” said Arlund, referring to the legal requirement that Cal/OSHA must issue a citation within six months of the alleged violation. “And I’m going to lose more coworkers.”