Sacramento's Urban Coyotes Aren't A Safety Concern. Here’s What To Do If You See One. 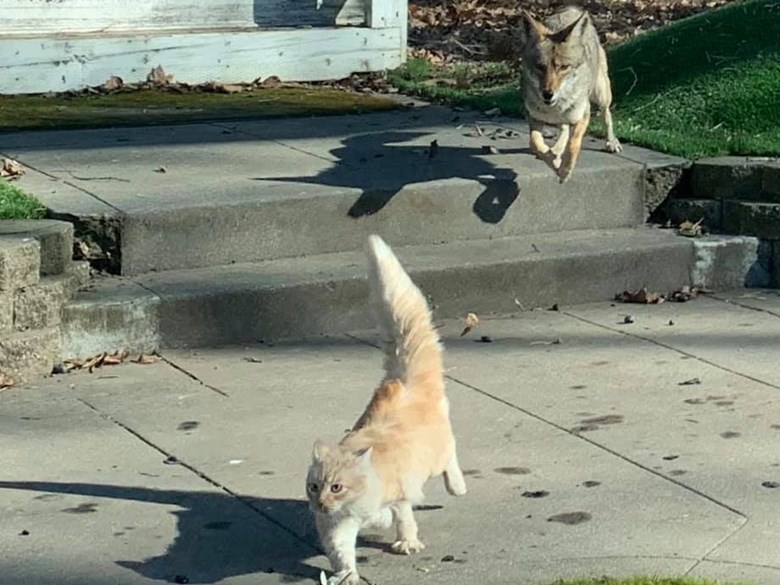 Dramatic photos of two coyotes chasing a cat up a tree in Midtown, which circulated widely on social media this past week, are sparking debate about the wild animals — and what residents should do if they see one.

The four images, taken by Sacramento resident Allyson Seconds, are compelling: one shows a coyote laser-focused on a cat, its ears back and eyes wide as it sprints toward a nearby tree. Another suggests that the feline escaped up the tree, with the coyotes laying in wait at its base.

“They looked like they were running scared in the first place,” Seconds wrote on Facebook about the coyotes, which she spotted before the chase on C Street. She quickly grabbed her phone to snap some photos. “I saw them dart out into the street between moving cars.”

Coyotes wait under a tree in Midtown Sacramento after chasing a cat into the branches.Allyson Seconds

The coyotes are not a safety concern, Huggins assured, adding that the animals have always been a part of city life, both in Sacramento and urban areas across the country.

CapRadio spoke with Huggins via phone about urban coyotes and the best ways for people to interact with the wild animals:

So, should people be worried? Are urban coyotes dangerous?

Is the number of coyotes in Sacramento increasing?

I would say we may be seeing more complaints or calls, but more of that seems to be related to just that: They're being posted more [on social media].

I'm sure you probably just saw the recent Facebook posts, where two coyotes chased the cat up the tree. … So, that person didn't actually call us. However, probably eight people that saw the post, but never saw the coyotes, called us. So we're not really getting more complaints about coyotes. … We're getting more complaints about, “Hey, I'm hearing about all these coyotes in the city. Why aren't you doing something about it?”

There are more unsheltered people living in encampments along the American River parkway. Is that causing coyotes to leave nature for the city streets?

You know, honestly, this is a gut reaction — no scientific backing whatsoever — but I think the increase in the amount of food, trash, so on and so forth that is left around the city creates more of an attraction. I don't know that they're necessarily being pushed off the levee more so than being attracted in.

I guess I could probably also argue that, yeah, possibly, because there's more people out on the levee, coyotes are looking for different places. But really, they tend to just travel easy paths. Almost all of the places that we see them more frequently are along levee areas or along railroad tracks.

The coyotes in those photos were chasing a cat. Do they eat a lot of cats?

A lot of people are worried about domestic cats. They can be a food source. But there are some studies that were done in Chicago, [which] has a coyote population that makes ours look quite puny. And domestic cats were about 1.3% of that DNA makeup of coyote scat throughout the city. It was far more fruit, decaying fruits from fruit trees and trash. Those were the big things that seem to be making up the coyotes diets when they did that study.

So, what should people do to keep coyotes away?

Picking up trash is honestly like one of the biggest things that can be done to help. A lot of people tend to, you know: It's 10 at night, you're taking the trash out, you don't want to walk all the way out to the cans and you set it outside your back door. You're now attracting wildlife of all types.

It’s kind of the primary accepted way of teaching coyotes to not be comfortable. The reason you have coyote-human interaction is typically because the coyotes start getting too comfortable in a location when they don't get scared. They become more brazen, and they're willing to try something else.

The biggest issue we have ... is somebody walks in their backyard, sees a coyote and turns around and goes back inside. That coyote has just learned that it is tougher than the people, and that it has a right to claim that property. So, we focus a lot on teaching people how to be big. How to be loud and how to teach the coyote. You know, you can't be comfortable here. And then they generally will move along. ...

So, we focus a lot on teaching people how to be big, how to be loud, and how to alert the coyote that they are not in a place where they're welcome.

Have you ever had to remove or kill a coyote?

I have been with the city now for eight years, and aside from injured or sick ones, which are a different situation, we have not removed a coyote for a human interaction incident. ...

There's one to two up in the Tapestry Square area [near T and 21st streets]. We actually did have a wildlife expert come out and take a look around that area. And it doesn't seem like those coyotes are bedding down there, more so that it is a stop along the path for resources. Basically.

What can people do to learn more about how to behave around coyotes?

If people are feeling like they're having concerning interactions, they can always reach out to me, send me an email [This email address is being protected from spambots. You need JavaScript enabled to view it.].

I can put on hazing classes. I do classes where I have everybody bring empty cans with them and we create pens, shakers. I can help teach them how to create hazing implementation devices if they want to talk about actual training. And then we can also, if people are having interactions that they feel are truly unsafe, then I can direct those concerns to the right departments and we can jointly make a decision.

How frequently do you do give coyote classes?

I've done two so far. We're getting ready to set up a third out in the River Park neighborhood. And, really, it's just about teaching people the different things that they can make and develop to carry with them. That helped the coyotes realize like, “Oh, hey, these people don't want us here. Let's move down the line a little bit.”

(Photo: A coyote chases a cat in Midtown Sacramento. The cat safely made it up a tree - Courtesy Allyson Seconds)