progressive activist Adriel Hampton wanted to tell the truth about a controversial Facebook policy — one that allows political candidates to lie in advertisements without a penalty.

But first, Hampton decided he needed to tell some real whoppers.

So, his political action committee, The Really Online Lefty League, ran an ad on Facebook claiming Republican Sen. Lindsey Graham of South Carolina had "endorsed the Green New Deal." Of course, he hadn’t.

Last week, Hampton, 41, even registered to run for California governor in 2022 so that his campaign could run more false ads on Facebook, shining an even brighter light on what he considers a dangerous policy.

Then, Facebook took notice and threw a penalty flag.

Specifically, it made Hampton’s content eligible for third-party fact-checking.

His ad about Graham now includes a warning that it’s been debunked, which allows Facebook to diminish its visibility. 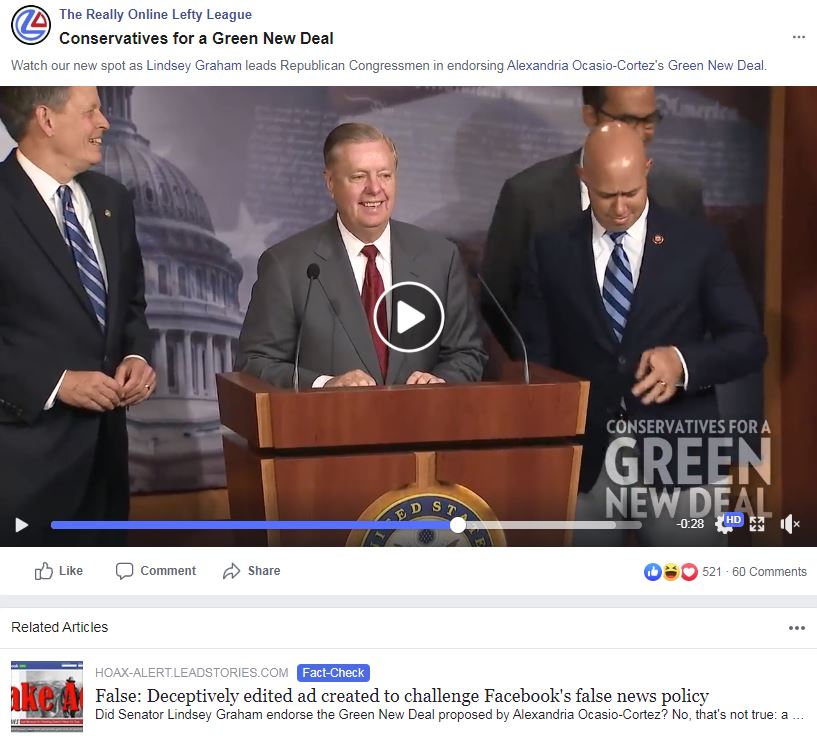 Meanwhile, ads from other political candidates continue to run on the platform, but Facebook isn’t holding them to the same scrutiny.

"This person has made clear he registered as a candidate to get around our policies, so his content, including ads, will continue to be eligible for third-party fact-checking," a Facebook spokesman told CNN Business.

Hampton called that a double standard.

"To be singled out for censorship by Facebook specifically because I’m challenging their broken policies, and calling for citizen oversight and Democratic oversight and legislative hearings in Sacramento, not only is it ludicrous, it’s obscene," Hampton said in a recent interview. "The logic of that is if you lie about lying, it’s OK to run those lies on Facebook. But if you’re truthful about lying, you can’t run those ads on Facebook."

Candidates such as Trump are free to produce "advertisements that trigger fear, rage and a sense of urgency," he said. "They’re able to be micro-targeted toward the most vulnerable members of our population, such as senior citizens, folks with low education."

Last week, The New York Times reported that more than 200 Facebook employees signed a letter also raising concerns about the company's political ad policy. "We strongly object to this policy as it stands," the letter reads, in part. "It doesn’t protect voices, but instead allows politicians to weaponize our platform by targeting people who believe that content posted by political figures is trustworthy."

"Our approach is grounded in Facebook's fundamental belief in free expression, respect for the democratic process, and the belief that, especially in mature democracies with a free press, political speech is the most scrutinized speech there is. Just as critically, by limiting political speech we would leave people less informed about what their elected officials are saying and leave politicians less accountable for their words."

She said the best way for Facebook to curb the spread of misinformation is to remove ads after they’ve been debunked rather than leaving them on the platform with a warning. Twitter announced last week it will stop running all political ads on its social media platform.

"We used to believe that exposing lies by politicians would shame them and prevent future lies because of the blow-back from voters," Nalder said. "Unfortunately, we now understand that false content nevertheless sticks in our minds, and repetition makes it seem more true, so seeing multiple friends posting even a flagged-as-false-ad, may reinforce the lies in the ad."

Hany Farid, a UC Berkeley computer science professor who studies social media and disinformation, said Facebook has proven it is "not good" at the business of political ads. But instead of concluding they should stop, "they simply decided to remove all restrictions."

PolitiFact is among the independent news outlets that partners with Facebook to fact-check content flagged by users. The partnership is part of a push by the social media company to clean up its news feed and become a more trustworthy platform.

PolitiFact fact-checked Hampton’s ad about Graham, noting it was a media stunt, and rated it Pants on Fire.

Hampton, who describes himself as a socialist, said Facebook’s decision to single him out won’t stop his campaign. He said his political action committee will continue to make fake ads. And he’ll continue to speak against corporate influence "because corporations, right now, are running our government."

Hampton said his campaign is broader than just fighting against Facebook’s ad policy. "It’s not a tech issue or an advertising issue when you allow someone to pay for lies to influence elections. It’s an issue that is a threat to our democracy."