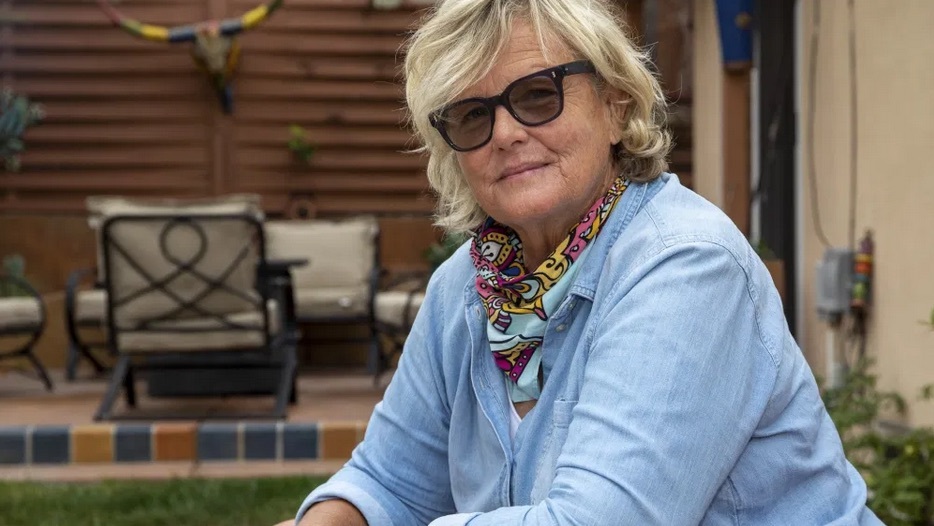 (Bailey Brown at her home in Pismo Beach on Oct. 25, 2020. Photo by Robert Oliver for CalMatters.)

Bailey Brown had never heard of Work Sharing when her boss pitched the state program to keep her and her co-workers on the payroll when California went into lockdown.

It was mid-March, and Brown, 63, saw her full-time hours slashed 60% as talent and HR manager for San Luis Obispo action sports retailer LeftLane Sports. The cuts were unnerving, but the layoff-prevention program run by California’s unemployment agency offered a lifeline. With Work Sharing, Brown’s employer kept paying for her benefits and reduced hours, and the state paid her for some lost wages — at first, anyway.

Brown is one of an unknown number of the more than 43,640 Californians who have applied for Work Sharing benefits since March, but who have since encountered long payment delays, missing funds, fraudulent charges or accounts frozen when workers need them most. It’s one of the smaller programs overseen by the state’s Employment Development Department, but Work Sharing claimants’ struggles underscore big questions about how many people are falling through the cracks at the agency consumed by a backlog of more than 1 million unemployment claims.

Seven months into the pandemic, Work Sharing has paid out $59 million in benefits, according to Employment Development Department data provided to CalMatters — a fraction of the $106 billion paid out in overall unemployment claims. The agency did not answer questions about how many Work Sharing claimants have experienced payment delays, or the average number of days to pay Work Sharing claims. A total of 8,924 employers have applied for their workers to be eligible for the program since March, the agency said, and 8,056 have been approved.

With unemployment still at 11%, lawmakers and economists are urging the state to move quickly to increase the relatively small number of companies and employees turning to Work Sharing. A bill signed this fall, AB 1731, aims to modernize the previously all-offline process to expedite claims, and the federal government has also agreed to fully fund Work Sharing during the pandemic to help companies rehire workers in California and 22 other states. But that offer only stands through the end of this year, increasing the urgency to get backlogs resolved.

“In California, we’re leaving an opportunity on the table,” said Till von Wachter, a UCLA economics professor and faculty director of the university’s California Policy Lab. “We are talking about very large numbers of people who will be looking for jobs. Work sharing can really play a role.”

Every week since March, Brown has logged her and her co-workers’ reduced hours in a spreadsheet, calculated the Work Sharing pay they’re eligible for, printed it all out, and mailed it to the department. It’s a lot of paperwork, but it was worth it in April, when she received her state-issued Bank of America debit card loaded with Work Sharing pay, plus the federal government’s $600-a-week supplemental unemployment benefits.

But in May, Brown said she stopped receiving all Work Sharing payments for six weeks. Deposits resumed over the summer at unpredictable intervals, but her account was frozen in September amid a far-reaching state effort to root out unemployment fraud. After a month of being unable to access funds in the account, the debit card was unfrozen in late October — but Brown is still missing $5,300 for hours worked since August, forcing her to rely on early Social Security withdrawals and dwindling retirement savings.

Have you filed for Work Sharing or unemployment in California? Tell us about your experience right here.

Von Wachter said information about payment delays is not typically included in public Work Sharing data, but he warned in April about concerns that the wage-replacement program’s manual process couldn’t scale fast enough to respond to the COVID-19 crisis. The warning proved prescient as the EDD buckles under the weight of 15 million unemployment claims filed since March, let alone the tens of thousands of Work Sharing applicants.

“Unfortunately it’s a small fraction of a very, very large number,” von Wachter said. “What we’re seeing is a staggering number of payment delays, but it has to be put in context.”

Delays aside, he worries about fewer employers turning to Work Sharing during the pandemic than they did during the Great Recession, since it’s easier to keep under-employed people earning money than it is for the economy to recover from mass layoffs. He suspects that several issues have limited Work Sharing participation, from a lack of awareness to the cumbersome application process to new COVID-19 stimulus options like Paycheck Protection Program loans.

Elise Franks has waited so long for her Work Sharing payments that she’s already back at her normal job. She, too, wonders if the thousands of dollars promised to help weather seven months of reduced hours will ever materialize. Franks, a 30-year-old behavioral technician for children with autism in Southern California’s Inland Empire, said she received one Work Sharing payment in June, and since then hasn’t been paid or able to get answers on EDD phone lines.

“It was my money that I needed,” said Franks, whose school partially reopened in October, restoring her normal paycheck. “I still need it, because I fell behind.”

A race for reforms

While workers like Brown and Franks try to keep treading water as bills pile up, the state’s new state could help others applying for the program. In mid-October, California switched to a new online system, and the agency is now required to send workers a claim packet within five days of receiving their application, said Tasha Boerner Horvath, the San Diego Democrat who authored the modernization bill.

“Each step was taking too long,” Boerner Horvath said. “We need to make sure the employer is a bona fide employer. But you could streamline that claimant process, which is what we did.”

Keegan Otsuka is one of the Work Sharing participants who has started to see movement after a long wait for missing payments. Otsuka, 24, filed using the old mail-in system in July after business slowed at his family’s San Diego die-cutting business and his usual 40 hours a week were cut to 25. He hadn’t heard anything in months when the money suddenly appeared in his account one Sunday in October.

It came just in time: “Right now, I’m living paycheck by paycheck,” Otsuka said a week before the funds arrived.

In addition to buoying workers like Otsuka, Boerner Horvath says Work Sharing is a win-win for the state and California businesses, thanks to the federal government’s offer this spring to reimburse 100% of costs for the program usually funded by employer taxes through 2020. That’s better for the state’s bottom line than adding to unemployment rolls, which it has already borrowed billions from the federal government to cover.

Brown, meanwhile, is just trying to stay hopeful as the uncertainty of the coronavirus recession drags on.

“I think it showed a crack in who we are, a big crack,” she said. “And I don’t know if we’re responding.”