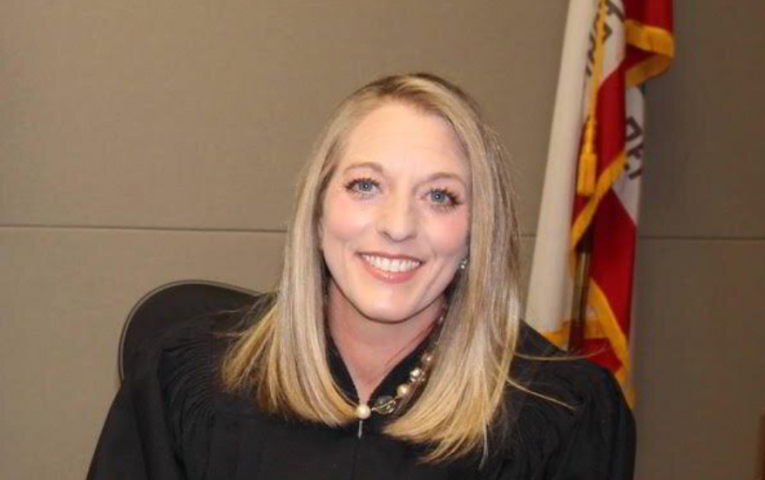 Now that Sonoma County voters have their June 7th primary ballot…they’re deciding a number of races. Among them are two different seats on the county superior court bench. As part of KRCB’s ongoing election coverage, KRCB's Greta Mart talked to the candidates for the county's next Superior Court Judge for Office #6.

Earlier in the week we heard from candidate John LemMon. Now we'll hear from his challenger...
PASSAGLIA MCCARTHY: I'm Laura Passaglia McCarthy. I am a resident of Santa Rosa, and currently a superior court commissioner, which means that I sit as a judge for all purposes as appointed by our bench. Prior to that, I was a deputy district attorney for roughly 15 years between Alameda and Sonoma counties.

MART: So you already effectively have been serving as a judge. Tell me about the difference between a commissioner and a judge.

PASSAGLIA MCCARTHY: I was appointed to the bench in October of 2021. I'm assigned to Department 6, which is one of our misdemeanor criminal courts. I handle all misdemeanor matters... their daily calendar appearances, the pretrial conferences, jury trials, bench trials, law in motion. So my daily duties right now are exactly the same as the department next to me, which is a superior court judge versus me as a commissioner...So one of the differences between the jobs and one of the reason why I would love to be elected to the superior court position is I would like to be able to participate and assist in the more executive and administrative functions of the court, which are not available to me now. So I would like to be able to serve our community and serve our court in all the capacities available. I've got the energy I've got the years ahead of me...I don't want to be limited in my service.

MART: Please tell me about this election process for judges.

PASSAGLIA MCCARTHY: The vast majority of people who come to our bench come via appointment from the governor. Under the California Constitution. that's the most likely way in which a vacancy would be filled. There is an exception...every judicial seat, even if appointed or elected, sits on a six-year term. So if you're appointed by the governor to a judicial seat, you enter that seat wherever it is in the life of its term. So let's say you're appointed and there's three years left on the term. At the conclusion of that three years, it's incumbent on you, the judge, to pull papers, to indicate that you would like to go another six years in your seat on the bench. In that window, where you pull those papers to identify that you intend to do another six years, there is an opportunity for the public to challenge you. If someone were to challenge that judge, then that sitting judge would now compete against whoever has challenged them in an election where the community would vote, it would be on the ballot. In this instance, we have two seats that have become completely open without an incumbent running because two incumbents retired at such a time, they made their seat allowable for open election. So seat six, which I am running for--Judge Nadler told me, "I'm not pulling papers for my seat. I'm going to allow it to go open." And we had a discussion about whether or not I would want to run for that seat and I ended up speaking to every single member of our sitting bench and asked their thoughts and feelings about my running for the open seat, nd I felt confident and propelled to go forward, in that I was sitting already, that I had the full support of the bench, and I reached out to our legal community who supported me. So I pulled papers for the seat,

MART:
The person who is running against you made the point that if you are elected, that there's a shortage of judges and that if you're elected, then we lose a working judge, making the backlog even worse. What do you say to that?

PASSAGLIA MCCARTHY:
Well, that's actually a misrepresentation of the facts. So the reality is this: we are down four judicial seats, not counting the two seats that are now running for election. As an appointed commissioner, my position doesn't seek gubernatorial approval. So if I am elected...the following day after I'm elected, our judges can begin to pick my replacement. Our bench will serve itself to refill my position as quickly as possible.

MART:
Because voters are not used to voting for judges, so it's hard to gauge what your judicial philosophy is. How do people know this?
PASSAGLIA MCCARTHY: So part of it is, is trying to get our word out to the public and then the public having an interest and going to a website and reviewing, reading or talking, I'll say the most important resource that our community has, is speaking to any members of the legal community that they know, because those are the people who are in our court system on a regular basis and see the actual daily inter-workings of our court system and can gauge how effective or competent or how much integrity any particular judge or lawyer has. So the best resource people have is access to people in the legal system, if they have it. But I will tell you, one of the challenges of running for this role is that we are running in a political election for a non-political position. I'm bound by the judicial cannon of ethics, which requires that I don't take a public opinion on any issues in controversy issues, policy, or prejudge any set of facts that may potentially come before the court, my court, or any other court. So I would say that I believe the most important things that someone can look at to assess whether someone's appropriate for the bench is what is their reputation for having integrity? What is their reputation for ethics? What is their reputation for being legally competent?